Security negotiations continue over release of Isawiya man’s body who was killed by police after stabbing 15-year-old Israeli. 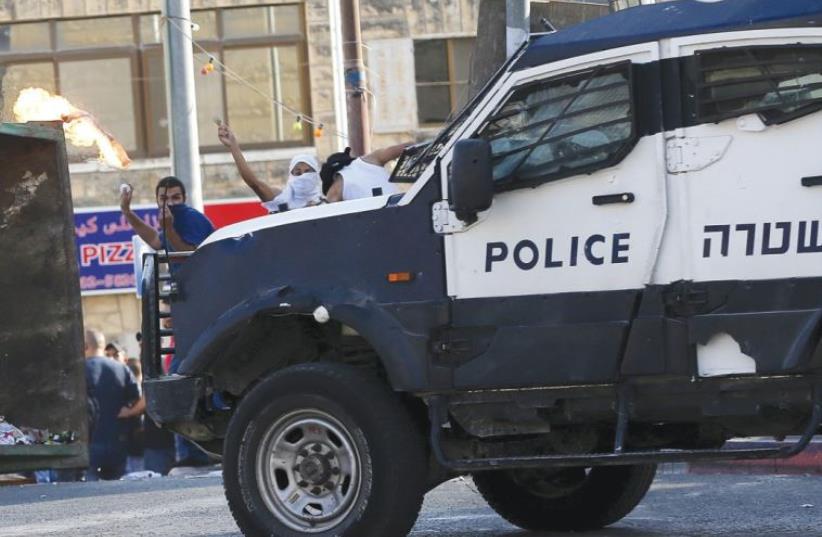 A POLICE vehicle is targeted by Arab rioters.
(photo credit: REUTERS)
Advertisement
Jerusalem Police arrested seven Palestinians during rioting in flashpoint Arab neighborhoods in the capital on Monday as tensions boil over amid negotiations for the funeral arrangements of an alleged terrorist shot dead Sunday morning after stabbing a Jewish teen.The violence comes as police continue talks with the family of Fadi Alon, 19, of Isawiya, who was shot and killed after allegedly stabbing a 15-year-old Israeli boy and charging police, hours after a terrorist murdered Rabbi Nehemia Lavi and Aharon Banita, by the Old City’s Lions’ Gate.According to police, Sunday’s stabbing took place at 4 a.m.near an east Jerusalem light rail stop, and Alon was shot after refusing to drop his knife and attempting to stab border police. However, Alon’s family claims a video of the incident proves he was innocent and acted in self defense.The teenaged stabbing victim was moderately wounded in the attack.Anticipating rioting ahead of, and during, Alon’s funeral, police on Monday night were still negotiating the terms of the release of his corpse, including the precondition that no more than 70 mourners attend the burial, and that there is no incitement of violence.Police spokesman Micky Rosenfeld said units responded to multiple disturbances throughout Monday, with the majority of arrests taking place in Shuafat and Isawiya where dozens of masked Palestinians threw firebombs and rocks at officers.“Police mobilized in Isawiya to prepare for the funeral of the terrorist this afternoon, which was delayed when Palestinians threw petrol bombs and stones at officers, who used non-lethal means to disperse the mob,” Rosenfeld said Monday night.Three arrests were made following the Isawiya rioting, while two other Palestinians were arrested during rioting in Shuafat, he said.Additionally, Rosenfeld said a Palestinian youth was arrested in southeast Jerusalem’s Armon Hanatziv’s promenade after throwing rocks at a Jewish couple, lightly wounding a man, while an Arab woman was arrested by the Lions’ Gate after attacking officers stationed there.Noting that rioting is common during a terrorist’s funeral, Rosenfeld said Alon’s procession will likely take place during the early morning hours of Tuesday.“For security reasons, funerals like these are normally held after midnight to prevent any disturbances,” he said. “They are not held during the day when the likelihood of violence is greatest.”During clashes in Isawiya on Sunday, video footage showed Arab-Israeli TV reporter Hanna Mahameed screaming in pain after purportedly being struck by a stun grenade; she has since resumed reporting for Lebanese- based Al-Mayadeen TV.Meanwhile, Rosenfeld said a 48-hour police ban on Palestinian men under the age of 50 from entering the Old City will continue, pending the results of an emergency government cabinet meeting being held Monday night.“The Old City is only open to Arab residents and store owners to prevent further terrorist attacks after Saturday’s murders,” he said.