“The real settlements Palestinians are after are Haifa, Jaffa and Tel Aviv,” Netanyahu declared. 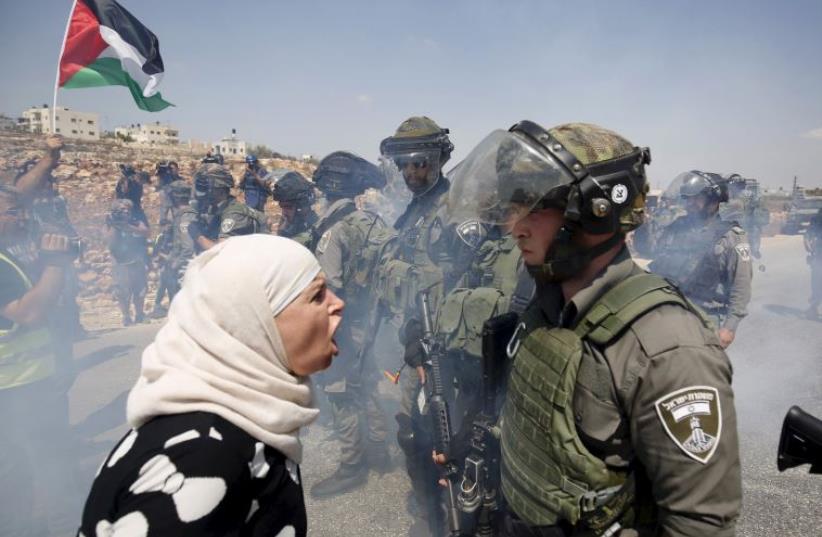 A Palestinian woman argues with an Israeli border policeman during a protest against Jewish settlements in the West Bank village of Nabi Saleh
(photo credit: REUTERS)
Advertisement
NEW YORK - The Middle East Quartet called Israel out on Friday for its ongoing settlement activity, which they said is “an obstacle to peace”.Representatives of the Quartet, which include United Nations Secretary-General Ban Ki-moon, Russian Foreign Minister Sergey Lavrov, United States Secretary of State John Kerry and European Union Representative Federica Mogherini, met in New York on the last day of the UN General debate. They were also joined by the Foreign Ministers of Egypt and France during the second part of the meeting to brief on their work to support Middle East peace.The Quarter expressed its “grave concern” that “the acceleration of settlement construction and expansion in Area C and East Jerusalem, including the retroactive “legalization” of existing units, and the continued high rate of demolitions of Palestinian structures, are steadily eroding the viability of the two-state solution.”They also expressed “serious concern” for the  “dire humanitarian situation” in Gaza, which they say is being exacerbated by Israel’s decisions to close crossings but also for the “illicit arms build-up and activity by militant Palestinian groups, including rockets fired towards Israel.”Palestinian unity too, they said, is an issue that must be resolved in order to advance the peace process.In light of the recent resurgence of violence in Jerusalem, the Quartet also called on all sides to “take all necessary steps to de-escalate tensions by exercising restraint, preventing incitement, refraining from provocative actions and rhetoric, and protecting the lives and property of all civilians.”Back in July, the Quartet members presented a report in which they outlined what the group believes are the main threats to the two-state solution and offered practical recommendations to enable an eventual return to peace negotiations. Among the threats were also the Israeli settlements in the West Bank and East Jerusalem.Last month, the United Nations Special Coordinator for the Middle East Peace Process Nikolay Mladenov slammed Israel during his briefing in front of the Security Council for continuing this activity.Following that briefing, the Palestinian ambassador to the UN Ryad Mansour had announced that a Security Council meeting on the issue will be held on October 14th under the informal UN mechanism known as the Arria-Formula.  The meeting, Mansour said, will focus on practical steps to be taken against Israel’s settlement building.Under this format, all of the Security Council’s 15 member states are not required to attend, but they are still expected to.During his speech in front of the UN General Assembly on Thursday, Netanyahu also addressed the settlements issue and said that it is one area that needs to be solved, they are not – and have never been – the core of the problem.The source of the conflict, rather, is “the persistent Palestinian refusal to recognize the Jewish state in any boundaries.”“The real settlements Palestinians are after are Haifa, Jaffa and Tel Aviv,” he declared. “Israel is ready, I am ready to negotiate. But one thing I will never negotiate is our right to the one and only Jewish state.”