Report: US may threaten Palestinians over DC office as leverage

US President Donald Trump may order the office shuttered within 90 days. 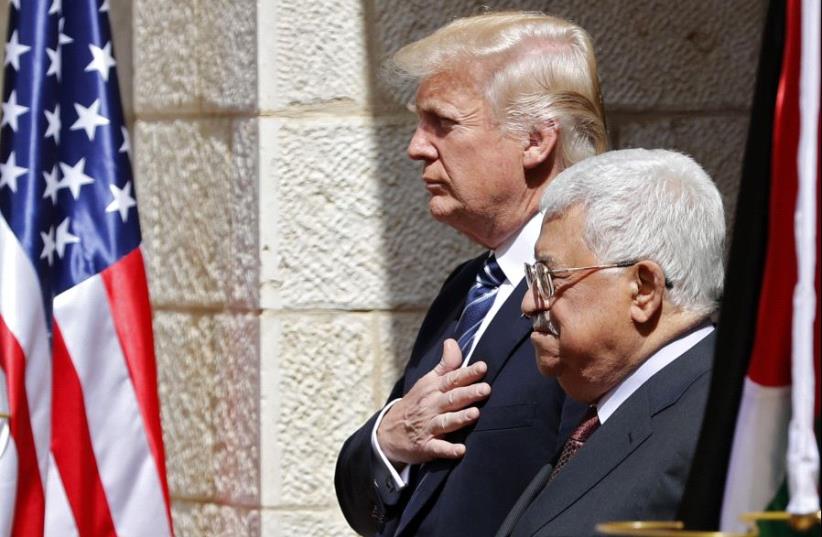 Palestinian Authority President Mahmoud Abbas (R) and US President Donald Trump listen to anthems during a welcome ceremony at the Presidential Palace in Bethlehem on May 23, 2017
(photo credit: THOMAS COEX / AFP)
Advertisement
WASHINGTON -- The Trump administration warned Palestinian Authority officials on Friday that it will shut their offices in Washington, DC, unless they enter serious negotiations with Israel, according to an exclusive report published by the Associated Press.The AP wrote that Trump's secretary of state, Rex Tillerson, put the PA "on notice" after discovering that it may have violated a law penalizing their referral of Israelis to the International Criminal Court. Palestinian Authority President Mahmoud Abbas in September told the UN General Assembly that the ICC should "open an investigation and to prosecute Israeli officials for their involvement in settlement activities and aggressions against our people."If the administration chooses to interpret the US law this way, President Donald Trump may order the office shuttered within 90 days– or else unless determine that the Palestinians have entered "direct and meaningful negotiations with Israel," which would keep the office open.
Trump-Abbas meeting in Washington. (Reuters)
A State Department official confirmed the report to The Jerusalem Post on Saturday."Under US law, to waive statutory restrictions on the PLO and its Washington office, the secretary must certify the PLO has complied with conditions imposed by Congress," the official said. "In December 2015, Congress introduced a new condition concerning certain Palestinian actions related to the International Criminal Court (ICC). The most recent certification period ended in November.""We were unable to make a new certification, and have notified the PLO accordingly," the official continued. "The secretary concluded that the factual record, in particular certain statements made by Palestinian leaders about the ICC, did not permit him to make the factual certification required by the statute."A second administration official said the secretary felt compelled to issue the warning to PA officials based on the letter of the law and on current Palestinian actions– and separate from ongoing efforts to restart peace talks.Their threat might provide leverage to the administration as it seeks to convince both parties to enter meaningful peace talks, the AP report mused, noting that the Trump administration would continue relations with the PA even if the office is closed.Prime Minister Benjamin Netanyahu said on Saturday night, "This is a matter of US law. We respect the decision and look forward to continuing to work with the US to advance peace and security in the region."The Palestine Liberation Organization has neither an embassy nor an ambassador in Washington, as the US does not recognize "Palestine" as a sovereign state. Instead it has a delegation situated at offices in Georgetown, headed by Husam Zomlot, to whom the PA refers to as ambassador.Tillerson is playing a backbench role in the administration's Mideast peace effort, which is led out of the White House by Jared Kushner, the president's son-in-law and senior adviser, and Jason Greenblatt, his special representative for international negotiations. Neither have signaled any plans or interest to twist Israeli or Palestinian arms to the negotiating table as they quietly develop a framework for a formal initiative.And the president himself has suggested that both sides are serious about his effort: "I actually think with the capability of Bibi and, frankly, the other side, I really think we have a chance," Trump said after meeting Israel's Prime Minister Benjamin Netanyahu in New York in September. I think Israel would like to see it, and I think the Palestinians would like to see it."