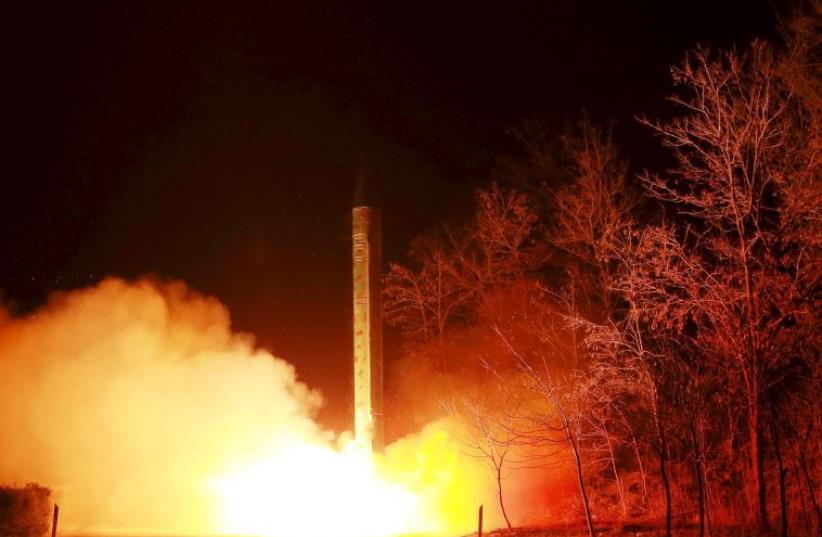 A ballistic rocket launch drill of the Strategic Force of the Korean People's Army (KPA) is seen at an unknown location, in this undated photo released by North Korea's Korean Central News Agency (KCNA) in Pyongyang on March 11, 2016.
(photo credit: KNCA KNCA)
Advertisement
Hamas’s attack tunnels in Gaza, Hezbollah’s Scud D missile stockpiles in southern Lebanon, and the Fordow Iranian nuclear facility, dug into a mountain, all have one thing in common. None of them would exist in their current form without North Korea’s assistance and worldwide weapons proliferation network.That fact may surprise some, but it certainly does not surprise Dr. Bruce E. Bechtol, an American-Jewish expert on the rogue state’s military proliferation to the Middle East.Bechtol is in Israel – his first time here – on a book research visit, and he described in detail to The Jerusalem Post Pyongyang’s heavy involvement in the force buildup process of state and substate actors that form the ranks of Israel’s enemies.Bechtol dropped out of high school at age 17 to join the US Marine Corps.Today he is a professor of political science at Angelo State University in Texas. Before entering academic life, Bechtol worked for many years in the heart of the classified American intelligence world.In the Marine Corps, he served for 20 years in signals intelligence. Then, he worked for the Defense Intelligence Agency, from 1997 to 2003, as an intelligence officer, eventually becoming a senior analyst for Northeast Asia in the Joint Staff’s Directorate for Intelligence in the Pentagon.Bechtol is the president of the International Council on Korean Studies, and has authored four books on the country, including Defiant Failed State: The North Korean Threat to International Security, and Red Rogue: The Persistent Challenge of North Korea.Transitioning from the world of intelligence to academia required special precautions in the first years, he told the Post in Ramat Gan on Wednesday, at the offices of the Shurat Hadin legal rights group, which is hosting Bechtol.