Security: Keeping guns out of the hands of terrorist cells

Taking advantage of a decline in violence, the IDF is targeting weapons manufacturers in the West Bank. 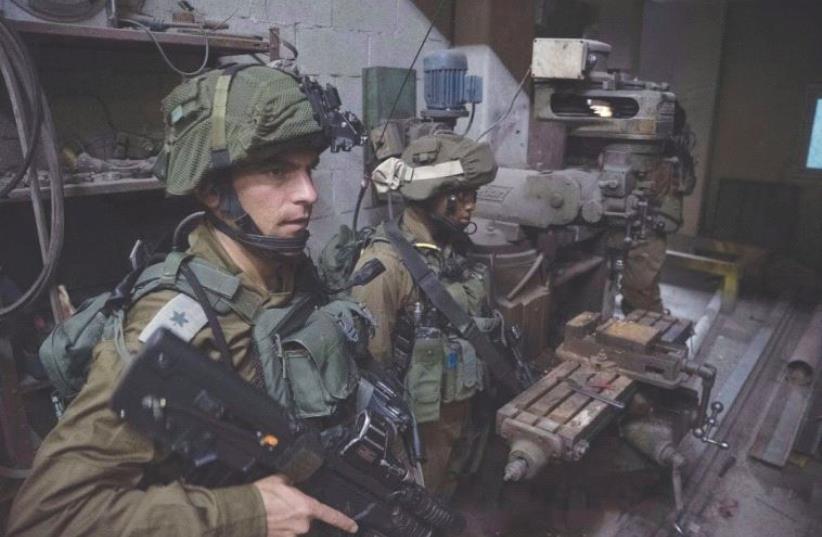 IDF TROOPS raid a West Bank weapons workshop this week.
(photo credit: IDF SPOKESPERSON'S UNIT)
Advertisement
Following a sharp drop in Palestinian terrorism and acts of violence across the West Bank, the IDF’s Judea and Samaria Division has recently gained breathing space, enabling it to shift its focus to a new goal: keeping guns out of the hands of terrorist cells that have sporadically targeted Israelis over the past year with deadly gun attacks, on both sides of the Green Line.This goal could be especially important now, ahead of the High Holy Days season, when terrorists might try to target Jewish festivities.Many recently formed shooting cells have not been created by established terrorist organizations, but instead, crystallized when a few Palestinian men, under the influence of online or media outlet incitement, get together, buy locally produced machine guns, and set out on attacks. In other cases, Hamas in Gaza has attempted to remotely create terrorist cells in the West Bank, recruit members and sought to transfer them funds.“We have begun dealing with firearms, uprooting the infrastructure that produces them,” a senior IDF source told The Jerusalem Post on Thursday. “We do not wish to merely respond to incident, but rather, to prevent them through surgical steps,” the source said.The source, who is familiar with the Binyamin Brigade’s activities in the central West Bank, said the army will take steps to ensure that the holiday period passes off quietly in September. “There is always the potential [for an increase in violence],” the source said. According to IDF figures seen by The Jerusalem Post, between April and July, the number of Palestinian attacks – of all forms – from shootings, to bombings, to stabbings, to car ramming attacks – have all dropped and remained steadily low. In July, for example, there was a total of nine attacks, of which three were shootings, four were stabbings, and two were vehicle ramming incidents.“We don’t know what will happen [during the holiday period],” the source said. “Terrorists could try to cause harm during an important period for us. We in the brigade are preparing for that. Our intention is to allow everyone – Palestinians and Jews – to live their lives regularly. We will place forces in areas that are prone to friction, and secure areas where visitors arrive during holiday, like [natural] springs. Last [Passover], we had double the number of visitors in Binyamin compared to the previous year.”A central aspect of these efforts is the IDF’s war on illicit West Bank guns. In cases where a terrorist cell forms without the intervention of large organizations, this can be difficult for the Shin Bet intelligence agency to pick up ahead of time. One way of counter-acting the problem is to make is hard for such cells to arm themselves.In the second half of August, the Judea and Samaria Division held its largest operation to date, targeting weapons manufacturers and gun traffickers in the West Bank. Units moved in to weapons workshops in Bethlehem and Hebron, shutting down gun-making centers that housed 22 machines that can be used to make firearms.Dozens of firearms and ammunition clips were seized and two suspects were arrested.Since the start of 2016, the IDF and Shin Bet have shut down some 30 gun-making workshops and seized over 300 firearms.Some 140 Palestinian suspects have been taken into Israeli custody for manufacturing and dealing in firearms. This comes as more than 30 terrorist attacks using firearms took place this year.“On the ground, we have seen a real decrease in lone attackers,” the military source stated. “The cells we see forming are under the influence of incitement by social and established media,” he said. On the other hand, the source stressed, “the figures point to a decrease in all forms of terrorism in recent months. This enables us to focus on more in-depth work. Our approach is to target the basis of the gun distribution networks, to uproot it.”“Knives are available to every person in every place. Firearms take time to obtain,” the source said. “Our goal is to make it harder for them.”Weapons include a wide range of improvised firearms, machine guns dubbed Karl Gustavs, as well as 9 millimeter handguns and 6.55 millimeter rifles.The gun workshops are disguised as businesses, the source said. “We look for markers that give away the presence of gun-making machines,” he added. “We are also targeting funds that reach gun manufactures, enabling them to buy materials.”Alongside such efforts, the IDF has shut down four Palestinian radio stations in the West Bank, including one last week, seizing equipment and arresting staff accused of promoting incitement to murder.The coming weeks will reveal whether such efforts have been sufficient in ensuring a calm October holiday period.