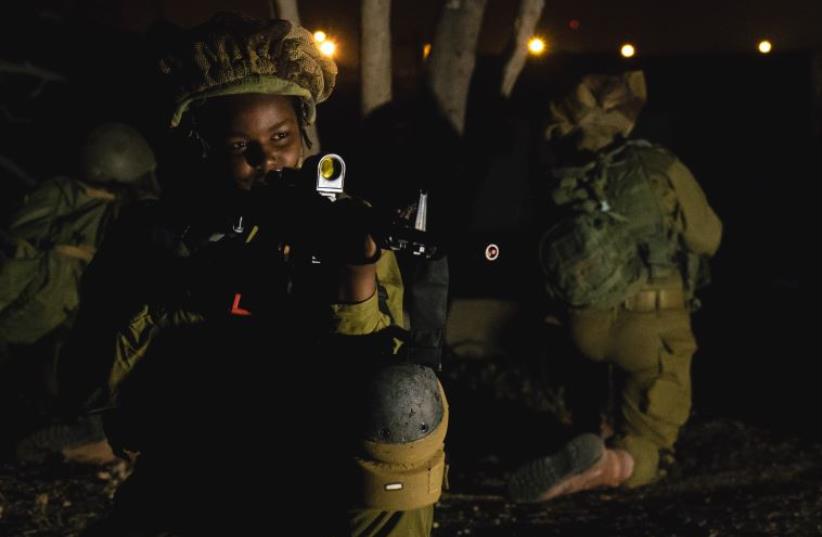 Jordan Lions female soldier during a combat drill held in recent days
(photo credit: IDF SPOKESPERSON'S UNIT)
Advertisement
In the shadow of rising regional instability, the IDF is building a growing number of specialty border battalions that remain in their designated areas of operations, enabling them to become familiar with their environment and respond to attacks by new threats such as Islamic State.One such unit is the recently established co-ed Lions of Jordan Battalion, which was set up to block jihadist intrusions from Israel’s neighbor to the east.The Jordanian border has traditionally been a peaceful and uneventful area, but military planners cannot rule out the possibility of Islamic State cross-border attacks in the future, as regional upheaval continues.Lt.-Col. Yosef Penso commands the battalion, which also conducts counter- terrorism operations in the eastern regions of the West Bank, on the outskirts of Nablus and on the slopes of Samaria.Recently, battalion soldiers completed their first nine-week series of combat exercises as a battalion, Penso, a 35-yearold father of two, told The Jerusalem Post.Asked if he thinks the peaceful situation on the Jordanian border will hold up, Penso said: “I don’t see any reason to believe it will not continue. But a look at the Golan and Egyptian borders [where radical jihadist organizations operate] allow us to understand that we have to put a border-specialty force here. Until now, there wasn’t such a force. Battalions were rotated in and out of this area.Now, the idea is to set up battalions that will specialize in this profession [of designated territorial defense].“We mainly rely on soldiers who remain in this arena, and who know the territory and its residents well. They easily notice when something has changed,” Penso said.The new battalion has “very good ties” to similar units, such as the Caracal (Wildcat) Battalion that permanently patrols the Sinai border, and the Bardalas (Cheetah) Battalion, which operates on the Arava-Jordan border, south of the Lions of Jordan.The battalion patrols the southern end of the Jordan security fence, employing camouflage techniques to blend into the landscape, and its members must know how to operate in extreme-heat condition – the type of soaring temperatures “that begin now and last until the end of October,” Penso said. Keeping themselves hydrated around the clock is a central aspect of their daily routine.“Battalion soldiers have to be in a dual mode – defending the border fence, which is one type of combat, and defending the areas around the villages of Samaria, which is different type of threat,” Penso said.Since its formation last summer, the battalion has dealt with two armed attacks, killing one Palestinian assailant and arresting another. There were no injuries among soldiers in either incident.It has since held its first combat drill, which was divided into two parts. The first was based on emergency scenarios such as a terrorist intrusion incident originating from Jordan, and the second involved Palestinian attacks in Samaria.As part of the drill, units conducted mock counter-terrorism raids and combat in a village setting.“In this exercise, we set up two fully operational companies with reconnaissance platoons and snipers in each company.We launched a drill that started with individual soldiers and gradually expanded to include the entire company.Each company spent a week in the field. Today, the soldiers are much better trained to meet their mission,” Penso argued.“We are still in the process of reaching our full order of battle. We are waiting to receive two additional companies, that are still being trained. We expect them to join us by March next year, and then our structure as a full battalion will be complete,” he said.The battalion has specialized lookout reconnaissance companies that specialize in visual intelligence-gathering techniques.In 2014, the IDF first announced the creation of the battalion at which time, a senior military officer had speculated while the Jordanian border is quiet and stable, this might change in the future.“We can’t hide the complexities that the Kingdom of Jordan is facing with threats to its north and south. The IDF has to be ready,” said Col. Ofir Livius, commander of the Jordan Valley Brigade.Additionally, he said, criminal and terrorist infiltrations aimed at smuggling narcotics and weapons were a potential hazard that required robust defenses and cooperation with Jordan.