Israeli expert to “Post”: rebuilding mosques in Gaza is not only championing the Palestinian issue but also an integral part of the self-perception of the ruling party, AKP, as defender of Islam. 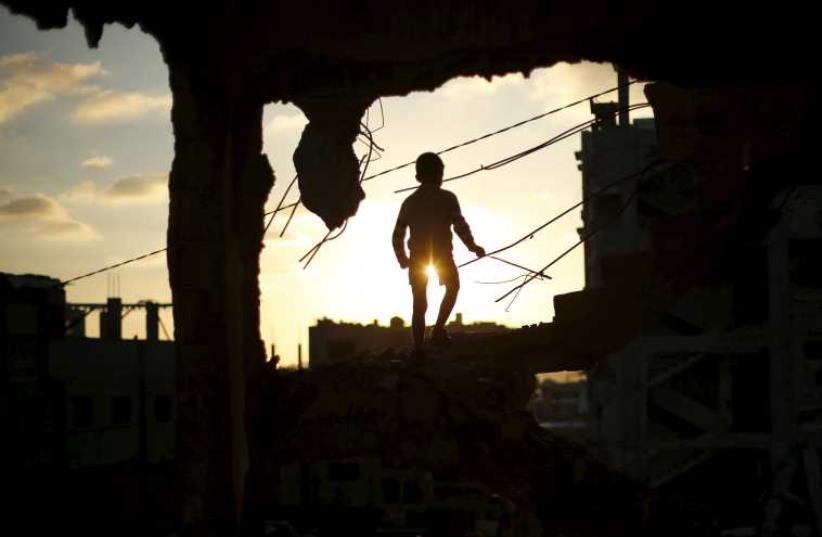 A Palestinian boy plays at a house that witnesses said was destroyed during Operation Protective Edge in the east of Gaza City
(photo credit: REUTERS)
Advertisement
The Turkish government has its hands full with the ongoing war next door in Syria and with its domestic Kurdish insurgency, yet it continues to maintain a foot in the Palestinian pie.The Turkish government will begin rebuilding nine mosques that were damaged during fighting in the 2014 war in Gaza, the Hurriyet Daily News reported on Monday.Israeli officials told the Turkish paper that the confirmation of the procedure for carrying out the projects was carried out by the Diyanet, the Directorate of Religious Affairs.The Diyanet is going to supervise the rebuilding in Gaza under the auspices of the Gaza Reconstruction Mechanism, an agreement reached between the Palestinian Authority and Israel that facilitates the importation of construction materials, according to the report.Efraim Inbar, the director of the Begin-Sadat Center for Strategic Studies at Bar-Ilan University, told The Jerusalem Post that “rebuilding mosques in Gaza is not only championing the Palestinian issue but also an integral part of the self-perception of the ruling party, AKP, as defender of Islam.”Another project to build a slaughterhouse in Gaza is also planned, the Turkish newspaper reported.Last week, a Turkish delegation met in Tel Aviv with Deputy Regional Cooperation Minister Ayoub Kara (Likud), to promote a proposal to build an industrial zone near Jenin in the West Bank.The Turkish delegation included Prof. Guven Sak, the managing director of an economic policy think tank based in Ankara.The proposed industrial zone would initially cover an area of 1,300 acres, and would likely expand later on.The project, backed by Israel, the US and the EU, would allow for duty-free export of goods to the US.Turkey has expressed interest in transferring to the industrial center large businesses, including textile and food factories as well a Volkswagen car factory, in order to support the Palestinian economy.