In October 2015, some 20,000 Israelis sued in a New York State court seeking an injunction to compel Facebook to affirmatively combat incitement. 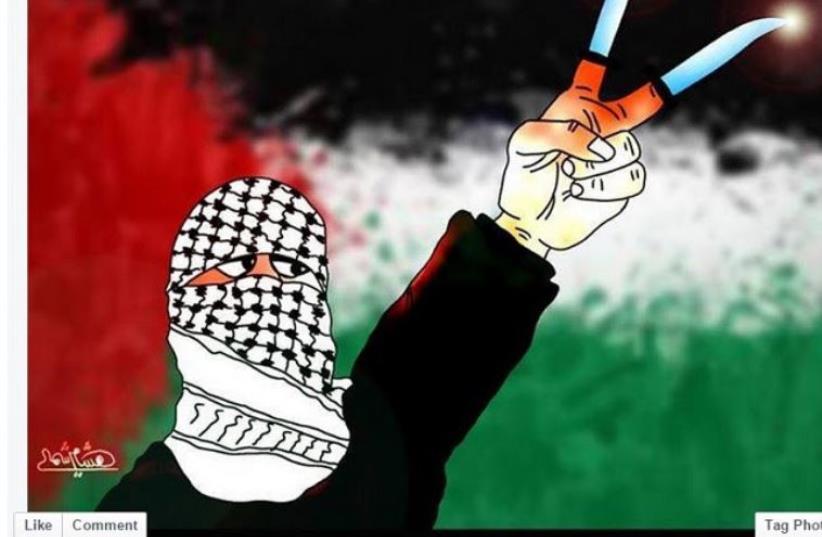 Cartoon on Facebook page of news portal "Palestine Now" shows Palestinian making victory sign with his fingers, drawn as two knives.
(photo credit: MEMRI)
Advertisement
Facebook is hooking up terrorists and has a social responsibility to block those connections, the United States Federal Court in Brooklyn has told the social-media giant.The comments came from Judge Nicholas Garaufis of the US District Court for the Eastern District of New York during a Friday hearing in a civil lawsuit filed by Shurat Hadin (the Israel Law Center). The suit was brought on behalf of 20,000 Israelis against Facebook for facilitating incitement and for damages in the wrongful deaths of several American citizens killed by terrorists while in Israel.Garaufis told Facebook’s lawyer: “Let us put the law aside a minute and talk about reality here. Reality is that people are communicating through the social media (which) has the potential of hooking people up to do very, very dangerous, bad and harmful things to other people in terms of international and domestic terrorism.”He added that Facebook was “basically putting together… people who would like to be involved in terrorism with people who are terrorists.” In that light, he asked, “Doesn’t Facebook have some moral obligation” to help contain those kinds of communications which lead to terror attacks? The court admitted that the judicial branch of US government has limited power to deal with such issues. The judge questioned Hadin’s local counsel Robert Tolchin as to whether the Communications Decency Act (CDA) would block all claims, as it essentially has in all past similar claims against Facebook and Twitter.Tolchin explained that Facebook was not the intended target of the CDA, which is focused on publishing.But he said that the social media platform has powerful algorithms it could use to catch and take down incitement and terrorist communications.Garaufis also – rather comically – slammed Aulden Burcher and his giant law firm Kirkland Ellis which represented Facebook for not taking the case seriously.Burcher, when questioned, revealed that he was only a second-year lawyer. The judge then angrily and caustically demanded that the firm send a senior partner to the next hearing, one who speaks directly with senior Facebook management “to come to see a lowly United States District Judge.” The next hearing was scheduled to take place today.In October 2015, some 20,000 Israelis sued in a New York State court seeking an injunction to compel Facebook to affirmatively combat incitement. But Facebook and Shurat Hadin moved their case into federal court, along with a separate July wrongful death damages case for the killing of several American-Israelis.Despite an announcement by Justice Minister Ayelet Shaked two weeks ago that Facebook had removed 95% of 158 offending terrorist pages and posts, Shurat Hadin director Nitsana Darshan- Leitner said on Sunday that “Facebook needs to take it upon themselves to affirmatively remove” problematic content.Darshan-Leitner called the removal of 158 pages and posts a good start, even if very belated, but said it was still only a tiny drop in an ocean of problematic content.She explained that as long as Facebook was merely reactive, and only removed content when informed by third parties like the Israeli government, terrorists would quickly replace old, removed pages with new ones.Only by Facebook taking an active role can terrorism be blotted out from social media, Darshan-Leitner said.The plaintiffs allege that social media, particularly in postings by Palestinians on Facebook, “is spurring on the terrorist attacks against Israelis,” during the year-old series of terrorist knife attacks.The lawsuits state that the plaintiffs “have been living in the cross-hairs of a murderous terrorist rampage carried out by killers who attack people with knives, axes, screwdrivers, cars and Molotov cocktails for no reason other than that the attacker perceives the victims to be Jewish.”