Thieves steal gold coins worth over $1.6 million from German museum

The coins, dated back to 100 BCE and worth over $1.6 million, were stolen from a museum in Bavaria, Germany, in the span of nine minutes.

Hundreds of rare gold coins worth over $1.6 million were stolen from a Bavarian museum in a span of just nine minutes, Bavaria’s State Police announced on Wednesday.

The coins, unearthed during a 1999 archaeological dig near Manching, Bavaria, Germany, from what is considered the largest discovery of Celtic gold in the 20th century, were stolen from the Celtic and Roman Museum in Manching. The coins stolen were worth $1.6 million, said Rupert Gebhard, who heads the Bavarian State Archaeological Collection in Munich.

Dating back to 100 BCE, they showcase how the Celtic settlement at Manching had links across Europe, Gebhard said. Experts fear that, because stolen items are hard to sell in the public market, the coins will likely be melted down and sold for gold value – approximately 250,000 Euros, Gebhard added.

“(It) would be a total loss for us,” Gebhart added. Markus Blume, who serves as Bavaria's Minister for Science and Art, said the coins provided a glimpse into the daily lives of Bavarian residents over 2,000 years ago. 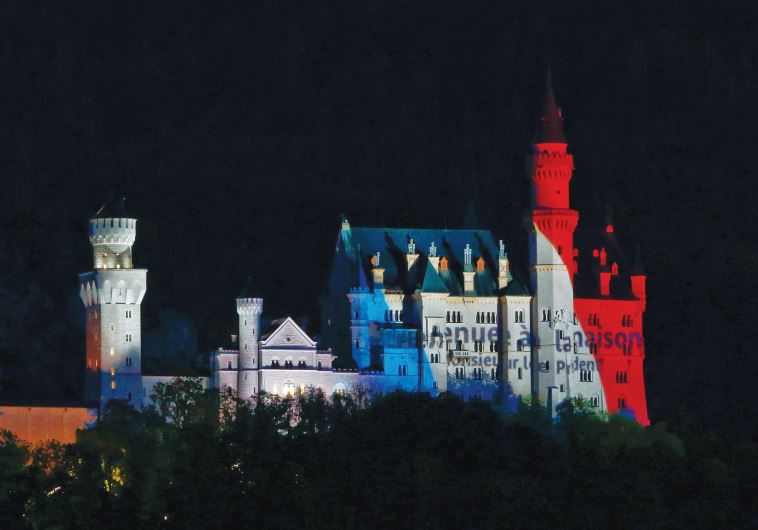 A CASTLE in Bavaria is illuminated in the tri-color. The author argues that terrorism seeks to bring the world back to the dark ages, when castles and human existence was brutish and religious zeal dictated the pattern of violence and life. (credit: REUTERS)

Deputy head of Bavaria’s State Criminal Police Guido Limmer said thieves cut the wires at a telecommunications hub about 1 km. from the museum, which disabled power in the area. In a nine-minute span, the thieves smashed display showcases and stole the entirety of Manching’s 1999 excavation.

“It’s clear that you don’t simply march into a museum and take this treasure with you. It’s highly secured and as such there’s a suspicion that we’re rather dealing with a case of organized crime.”

“It’s clear that you don’t simply march into a museum and take this treasure with you,” Blume told public broadcaster BR. “It’s highly secured and as such there’s a suspicion that we’re rather dealing with a case of organized crime.”

Further, Limmer linked the robbery to prominent museum robberies from the past few years such as the 2019 robbery of Dresden’s Green Vault Museum, where up to $1 billion worth of diamonds, art and jewels was stolen.

“Whether there’s a link, we can’t say… We are in touch with colleagues to investigate all possible angles,” Limmer declared.