While filming the bar-mitzva episode of his new sitcom, 'Crazy Ones,' America's favorite funnyman live-tweets his Jewish fun. 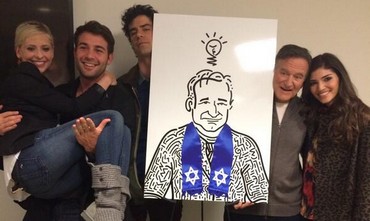 Disney's favorite genie in a bottle, Robin Williams, who is known for many roles  including playing a magical sidekick to Aladdin, is thinking about a new career path: rabbi!

Well, not really. While filming the latest episode for his new CBS series Crazy Ones, Williams, along with other cast members including Sarah Michelle Geller, live-tweeted while they filmed the 'bar-mitzva' episode. In the episode, Williams throws a coming-of-age party for a client's son.The cast and crew were so excited about filming the Bar-Mitzvah party, Williams even Tweeted in Yiddish, saying "I feel such a shpilkis for this episode.  #crazyones #zachmitzvah." Shpilkis is the Yiddish word for uncontrolled excitement.The Jewish partying brought Mr. Doubtfire back to his youth, when he was quite the party animal. How many bar-mitzvahs did Williams get invited to when he was a teenager?

When I was in 8th grade in Detroit, I went to 13 Bar Mitzvahs in one year. #crazyones #zachmitzvah

He also got excited about dancing the Hora, Tweeting simply, "Hora!" while dreaming about what his life would be like if he had gone a different professional route. Here is a sneak peak at Rabbi Williams, brought to you by the cast of Crazy Ones.