Gantz: Lehava, La Familia should be defined as terrorist organizations

Both Lehava and La Familia members have been involved in incitement and acts of violence against Arabs. 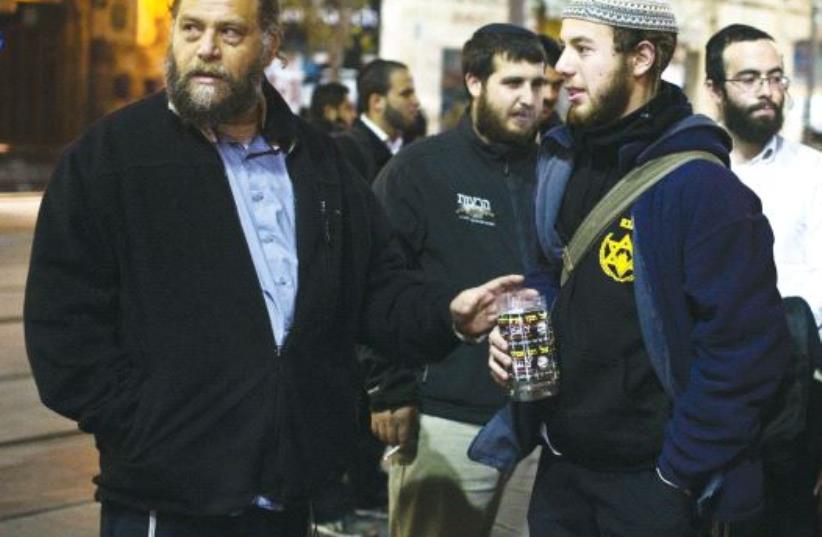 Ben-Zion Gopstein (left), leader of the group Lehava, gathers with some of his young followers in Jerusalem in 2014
(photo credit: REUTERS)
Advertisement

Israeli politicians on Monday called for the far-right Lehava and La Familia organizations to be declared terrorist organizations after right-wing activists chanted violent anti-Arab slogans during the Jerusalem Day flag march on Sunday.

Video from Damascus Gate showed groups of participants in the march chanting anti-Arab slogans including “Shuafat is on fire,” “Death to Arabs,” “Muhammad is dead” and “The village is burning.” Violent clashes between Jews and Arabs also broke out in multiple locations around east Jerusalem.

Defense Minister Benny Gantz stated during a faction meeting that Israel would continue to pursue “the instigators and perpetrators of violence everywhere.”

“As defense minister, I believe that the time has come to consider defining organizations such as La Familia and Lehava as terrorist organizations, and I know that the issue is at the doorstep of the defense organizations and trust that the heads of the organizations will do the examination in the cleanest and best way,” said Gantz.

Public Security Minister Omer Bar Lev also called for the organizations to be declared terrorist organizations, saying, “Even before I became a minister, I turned to the attorney-general with the aim of examining the possibility of outlawing La Familia and Lehava.

Members of La Familia group protest against the intention of Beitar owner Moshe Hogeg to sell a percentage of the group to a member of the United Arab Emirates royalty, at Beitar Jerusalem training ground in Jerusalem on December 4, 2020. (credit: FLASH90)

“The government of change is the one that permitted the ‘death to Arabs’ march of Lehava and La Familia,” tweeted Odeh. “If Lapid and Gantz really are against Kahanists, they should declare Lehava and La Familia as terrorist organizations. Less condemnations and more action.”

Lehava is headed by Bentzi Gopstein, a far-right activist who was indicted for incitement to violence in 2019 over comments he made from 2012 to 2017. The group is against personal relations between Jews and non-Jews and also loudly opposes lesbian, gay, bisexual and transgender people.

La Familia is a far-right group that supports the Beitar Jerusalem soccer club, although the club has distanced itself from the group.

Both Lehava and La Familia members have been involved in incitement and acts of violence against Arabs.

The United Arab Emirates on Monday condemned the actions of right-wing Israeli activists on the Temple Mount in advance of the Jerusalem Day festivities, in which they flew Israeli flags, chanted slogans and prayed.

“The UAE strongly condemned the storming of extremist settlers into the courtyard of the blessed al-Aqsa Mosque under the protection of the Israeli forces,” the UAE Foreign Ministry stated on Monday, a day after the event.

The Turkish statement mentioned MK Itamar Ben-Gvir (Religious Zionist Party) who also visited the Temple Mount on Sunday to protest the status quo that forbids Jewish prayer at the site. He also wanted to push back against Hamas, which had promised to launch rockets against Israel for holding a Flag Day parade in the old city to mark its reunification during the Six Day War, 55 years ago.

‘The raids on al-Aqsa Mosque by the Israeli member of parliament, Itamar Ben-Gvir, and by radical Jewish groups under the protection of the Israeli police, as well as the attempts of these groups to worship in this area, are a clear violation of the status quo of al-Haram al-Sharif and al-Aqsa Mosque,” Turkey said.

“We call on the Israeli government to take the necessary measures to preserve the status quo of these holy places, and reiterate our call not to allow provocative actions that will escalate the tension in the region.”