State assemblyman: We’re going "to do business with the State of Israel." 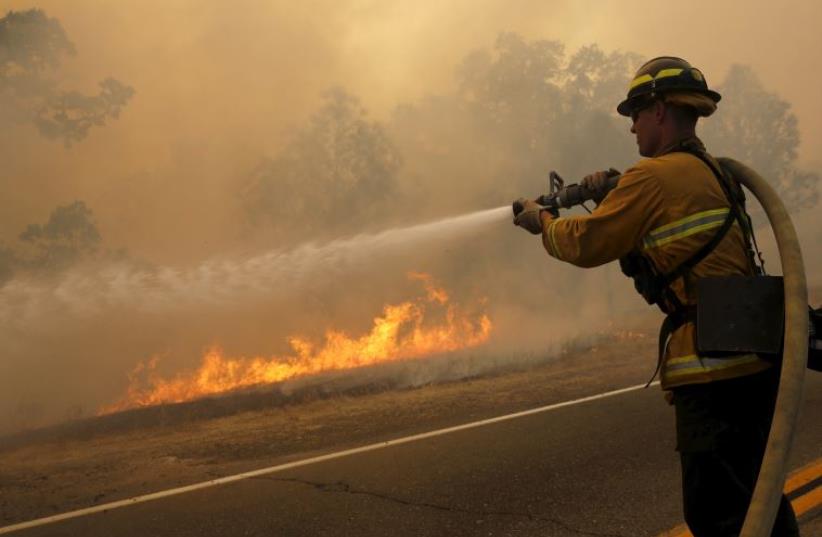 A firefighter uses a hose to extinguish flames.
(photo credit: REUTERS)
Advertisement
Aiming to help combat the ongoing drought crisis plaguing the state of California, an initiative launched on Wednesday night hopes to unite the brainpower of Israeli and Silicon Valley entrepreneurs.More than 100 business executives, investors and policy- makers gathered for the kickoff of the Israel-California Green-Tech Partnership at Google’s Israeli headquarters in Tel Aviv.The partnership co-founded by recent Californian immigrant to Israel Ashleigh Talberth and her Californian colleagues Mark Donig aims to create a bridge between the two start-up capitals for private and public sector initiatives in the water industry. Other founding steering committee members include 10 Californian and Israeli entrepreneurs and corporate leaders. The launch took place concurrently with the biennial Tel Aviv WATEC event, the 8th International Exhibition and the 5th International Conference on Water Technologies and Environmental Control.Among visitors attending the convention from around the world was a sizable group from California, who took part in a session devoted to California and Israel’s cooperation in both the water and energy sectors.“I came to Israel and I really saw a divide between Silicon Valley and Israel on cleantech,” Talberth told The Jerusalem Post, on the sidelines of the WATEC events.“There wasn’t really a hub at the intersection of both.”Talberth, with a background in economics and cleantech, said she began getting together with entrepreneurs in the Israeli sector with the hope of strengthening ties among them and their Californian counterparts.“There’s a huge drought crisis in California,” she said. “I came out here and saw that Israel is the No.1 leader on this issue and this seemed like a great first step for the group.”While Google is not involved with the Israel-California Green-Tech Partnership in an official capacity beyond hosting the Wednesday night event, Google’s California- based [e]Team design and construction integrator Andreas Gyr sits on the group’s steering committee, alongside other Californian and Israeli entrepreneurs and corporate leaders.“At a high level, we are looking to convene and engage on both public private sector initiatives and potentially on the private innovation side of things, to take aggressive steps on the drought by leveraging Israeli successes on this issue,” Talberth said.Gov. Jerry Brown and Prime Minister Benjamin Netanyahu signed a memorandum of understanding some 18 months ago to foster economic collaboration and industrial research addressing water scarcity and conservation, among other issues.California state assembly member Richard Bloom, chairman of the Assembly Budget Subcommittee on Resources and Transportation, spoke at the WATEC session about the drought in his state, and importance of the memorandum of understanding signed with Israel.Bloom told the Post that discussions were under way about how to implement the memorandum.At a time when California urgently needs to develop climate adaptation strategies and implement mitigation tools, the understanding signed with Israel could lead to critical partnerships with a country that Bloom described as “a world leader in desalination, water purification, water recycling, and irrigation technologies.“Given the role that I play in the legislature, and in particular being a Jewish member of the legislature and having a long standing relationship with Israel, [I am making] it my mission to make sure that the memorandum of understanding is successful,” Bloom said. “Many times we have agreements that look nice on paper, and then nothing happens. That’s simply not acceptable in this instance.”Bloom stressed the importance of moving forward with Californian-Israeli partnerships in the water sector as the Boycott, Divestment and Sanctions movement increasingly takes a foothold on college campuses across the state.“Moving forward sends a strong message that the state of California is going to do business with the State of Israel,” he said.Bloom said that California was also “a very arid Mediterranean climate, but we haven’t believed that as a state.We’ve treated ourselves like we’re in a place where there’s plenty of water. That’s been the tradition in California.”Due to persistent drought many farmers in California have had to leave land fallow, reduce grazing areas for their animals and face exorbitant prices for animal feed, Bloom said.In one county residents were left without piped water when the water wells ran dry, he said.The state has provided $2 billion worth of emergency drinking water in 2014 to communities in need, and recently budgeted $1.7b. to combat the drought – as well as $7.5b.in bond funding. But Bloom warned that despite this financing, California is by no means prepared for the future.“Israel has been in a drought since the day it became a state, but has dealt responsibly with it,” Bloom said. “There’s an environment here and a product base and technical knowhow that we can benefit from in California.”