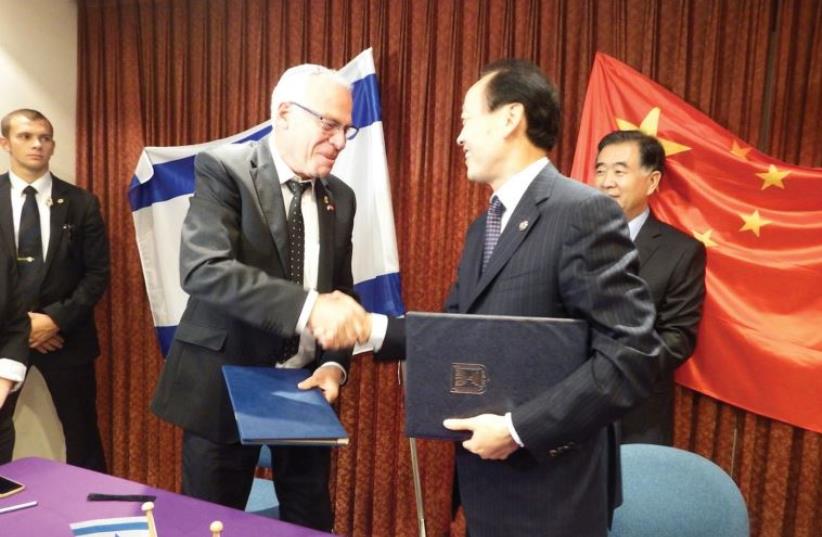 AGRICULTURE MINISTER Uri Ariel and Chinese Deputy Agriculture Minister Yu Xinrong shake hands after signing an agricultural development plan on Thursday.
(photo credit: NAAMA ROSENBERG)
Advertisement
Aiming to expand existing agricultural trade and research opportunities between the two countries, Agriculture Minister Uri Ariel and China’s Deputy Agriculture Minister Yu Xinrong have signed a joint action plan for future collaborations with the hopes of doubling agricultural trade volume between the two nations over the next five years.The signing, which took place on Thursday at the Israeli Agriculture Ministry in the presence of China’s Vice Prime Minister Wang Yang, was a follow-up to an August meeting between the Israeli and Chinese agriculture ministers in Beijing. The joint action plan aims to promote cooperation between the two nations in the sector, specifically focusing on bilateral trade, knowledge exchanges and collaborative research projects, the Agriculture Ministry explained.“We are excited about the economic and trade cooperation between Israel and China,” Ariel said. “There are many successes, but it is not enough. There is more to do to broaden the bilateral ties, and the purpose of this meeting was to advance further achievements. Let us increase our exports to Asia and, thereby, help farmers, as well as limit the European boycott.”By continually strengthening cooperation, the action plan aims to speed up agricultural trade volume between China and Israel to $450 million by 2020.Such a goal is reasonable because the number is approximately double the agricultural trade volume between the two countries now, the Agriculture Ministry’s deputy director-general for foreign trade and international relations, Itzik Ben-David, told The Jerusalem Post on Sunday, since China in the past has not been a typical target for food imports and exports in Israel due to the long distance involved and various other aspects of the Chinese market.Israel currently is exporting about $60m. of food products to China and about $2.5 billion of food products globally, while importing about $180m. of food products from China, and about $5.5b. of food products from the rest of the world, according to Ben-David.Trade likely will grow in more significant volumes in the agricultural technology market, Ben-David said, so the two countries are aiming to mutually promote agricultural trade and encourage entrepreneurs to engage in collaborative work on issues such as food quality and crop protection systems.Also key to the plan is promoting cooperation in and establishing joint research centers and laboratories that focus on areas such as genetics, desert agriculture, plant and animal cultivation and food safety, the ministry said.The two countries also will promote other collaborative projects, such as the future Ningxia-Israel Training and Demonstration Farm, the Agriculture Ministry added.The fruits of an agreement signed between MASHAV – Israel’s Agency for International Development Cooperation – and the local Ningxia government at the end of October, the demonstration facility is slated to showcase Israeli agricultural and irrigation technologies, the Foreign Ministry said at the time.Another existing place where the action plan calls for expanded cooperation is MASHAV’s Chinese-Israeli International Center for Training in Agriculture, at the Agricultural University of China, established in 1993 by then-foreign minister Shimon Peres, which began operations in 1998.A central motivator behind the joint action plan is the insufficient amount of cooperation on a scientific level in the Chinese and Israeli agricultural sectors, explained Prof. Sheenan Harpaz, deputy director for research and development at the Agricultural Research Organization’s Volcani Center – the research arm of the Agriculture Ministry.“There’s a lot of activity that MASHAV does that is giving on-the-ground instruction, but from a scientific point of view, [Israel and China] would like to see more mutual scientific work,” Harpaz told the Post on Sunday. “For that, they are prepared to consider establishing a center for scientific cooperation.”One crucial area that scientists from both countries are likely to work on together is that of post-harvest, he said.Research collaborations with their Chinese colleagues would have great benefits for Israeli agricultural scientists since the collaborators would be able to receive input from each other and funds from both governments, Harpaz explained.“We tend to look at it as one and one yields three,” he said. “There’s a synergistic effect here.”Regarding the demonstration farm planned for Ningxia, Harpaz said the Chinese government is eager to invest in Ningxia, as the country works on promoting its autonomous regions. There, the government would like to bring in technologies that help farm the desert, he added.Being involved in such demonstration facilities around the world benefits Israel as the people on the ground begin to become familiar with innovation developed by Israeli companies, Harpaz said.“It enhances the Israeli industry here,” he continued.Moving forward, Harpaz said he had a positive feeling about the future of Israeli and Chinese collaborations in the agricultural sector, acknowledging that the growth would be gradual. Doing business in China is still not easy, he explained, citing his own experience of the past two years trying to bring the Kora aquaculture firm there.“It seems like it’s getting better now,” he said. “In the area of agriculture, it’s been difficult to get business going with the Chinese. But hopefully once it gets going, it will have it’s own momentum.”“My overall outlook is optimistic,” Harpaz added.“I think the time that has passed over the past few years and the realization that they need to feed their people has prompted them to seek our innovative technologies.”