Hoverboards pose a true danger to children, who often opt to not wear helmets when riding them. 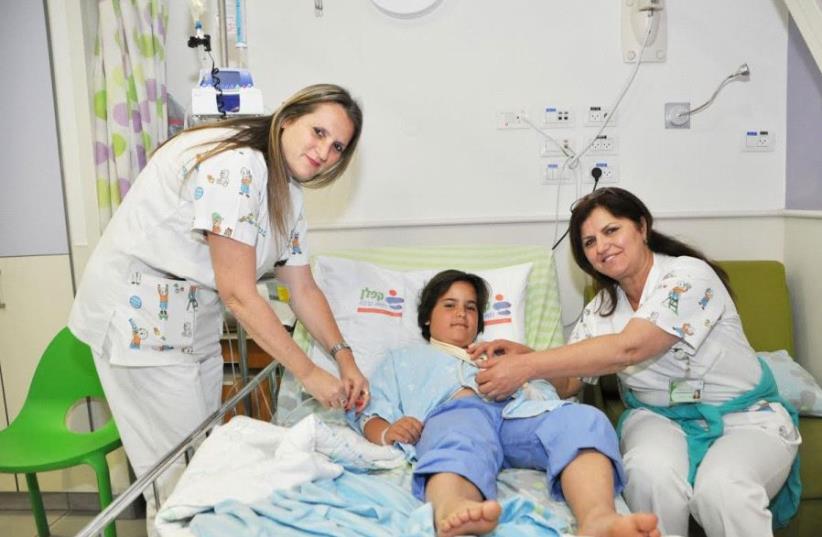 Alon Sarig, after operation for broken hand from hoverboard incident
(photo credit: KAPLAN MEDICAL CENTER)
Advertisement
Parents should not buy hoverboards – rechargeable, self-balancing, electricpowered, wheeled objects – for children who are under the age of 16, use them in the streets and don’t wear suitable helmets when riding. So say doctors at Kaplan Medical Center in Rehovot, who have in recent months treated many youngsters who have been hurt while riding them.Some of the victims have had to undergo surgery to repair injuries caused when they fall or collide with another object, said Dr. Shai Mendler, a senior orthopedist at the hospital.During Passover especially there were numerous hoverboard accidents, but many more are expected during the upcoming school vacation. Five children and teens in the Rehovot area alone fell and suffered fractured bones, and several needed surgery.Nine-year-old Alon Sarig of Kibbutz Brenner was one of the children who took a bad fall during the festival.He rode over a small bump, fell and broke his hand.His parents had just bought him an expensive hoverboard (they cost around NIS 1,500 each). During the surgery, metal rods had to be inserted to strengthen the bone at the base of the hand. Alon was required to wear a plaster cast for four weeks following removal of the rods after 14 days.Mendler said a growing number of youngsters and adults are turning up in the emergency room with hoverboard injuries, especially to the upper limbs.Such devices can even be deadly especially if ridden in traffic.According to the law, one may use a hoverboard only from age 16 and up, at a maximum speed of 13 miles per hour and wearing a helmet and remaining on sidewalks. For many reasons, it is healthier to walk.Liran Sarig, Alon’s father, said hoverboards look “innocent and user friendly,” but that they must be ridden carefully and properly. Teens need training in a safe place and have to wear protective gear, he added.COULD GENETICS INFLUENCE WHAT WE LIKE TO EAT? Have you ever wondered why you keep eating certain foods, even if you know they are not good for you? Gene variants that affect the way our brains work may be the reason, according to a new Spanish study.Silvia Berciano, a predoctoral fellow at the Universidad Autonoma de Madrid who led the study, suggested that understanding the roles of genes in eating behaviors and food preferences could lead to personalized diets that are easier to follow. She presented her findings at the annual meeting recently of the American Society for Nutrition in Chicago.“Most people have a hard time modifying their dietary habits, even if they know it is in their best interest,” said Berciano. “This is because our food preferences and ability to work toward goals or follow plans affect what we eat and our ability to stick with diet changes. Ours is the first study describing how brain genes affect food intake and dietary preferences in a group of healthy people.”Although previous research has identified genes involved with behaviors seen in eating disorders such as anorexia or bulimia, little is known about how natural variation in these genes could affect eating behaviors in healthy people. Gene variation is a result of subtle DNA differences among individuals that make each person unique.For the new study, the researchers analyzed the genetics of 818 men and women of European ancestry and asked them about their diet; they found that the genes they studied did play a significant role in a person’s food choices and dietary habits. For example, higher chocolate intake and a larger waist size was associated with certain forms of the oxytocin receptor gene, and an obesity-associated gene played a role in vegetable and fiber intake. They also observed that certain genes were involved in salt and fat intake.The new findings could be used help minimize the risk for common diseases, such as diabetes, cardiovascular disease and cancer by tailoring diet-based prevention and therapy to the specific needs of the individual.“The knowledge gained through our study will pave the way to better understanding of eating behavior and facilitate the design of personalized dietary advice that will be more amenable to the individual, resulting in better compliance and more successful outcomes,” said Berciano.The researchers plan to perform similar investigations in other groups of people with different characteristics and ethnicities to better understand the applicability and potential impact of these findings.They also want to investigate whether the identified genetic variants associated with food intake are linked to increased risks for disease or health problems.SALIVARY GLAND TREATMENT AT PORIYA More than 25 complicated operations for the removal of salivary glands have been prevented by activity at the center for treatment of salivary glands at Poriya Medical Center in Tiberias. The center was opened a year ago by Dr. Yehonatan Gottlieb in the maxillofacial surgery department headed by Dr. Imad Abu El Na’aj.Most of the procedures are carried out in the outpatient clinic with only local anesthesia and no need to remain overnight, thus complications are minimized.Over 100 patients have been treated there, the youngest three years old and the oldest 87, said Gottlieb.The most common problem is blockage of the salivary glands, which is treated with sialoendoscopy, a minimally invasive technique that facilitates for salivary gland surgery. A small endoscope is placed into the salivary glands through the salivary ducts that empty into the mouth.“We have managed to prevent more than 25 operations for removal of the gland. Patients are sent home after 30 minutes of supervision and most proceed to have a normal day,” Gottlieb said.
Sign up for the Health & Wellness newsletter >>