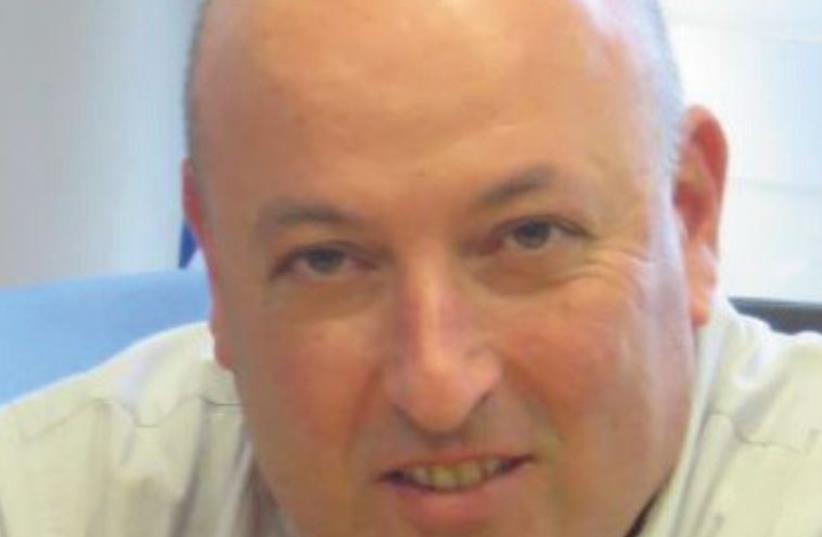 ITAMAR GROTTO
(photo credit: JUDY SIEGEL-ITZKOVICH)
Advertisement
Prof. Itamar Grotto, the Health Ministry’s chief of public health, denied on Wednesday that due to “pressure from the Israel Dairy Board” the ministry canceled plans to downgrade recommendations to drink “two or three” servings of dairy products daily to only two per day.The claim, on page one of Haaretz that day, said that “too much milk” was harmful and that dairy board representatives who “regularly make their presence known through the ministry” stymied ministry plans to change its recommendation downward.Grotto told The Jerusalem Post that dairy products, especially low-fat milk, yogurt and cheese, are beneficial to health of children, teens and adults (except for those who lack lactase, the enzyme that digests milk, and thus should not drink it or should add lactase drops to it). He singled out a “Harvard study” that recommended only two daily servings of dairy products because of the hormones.He himself does not drink milk, because it “doesn’t agree with his stomach,” but he eats two or three servings of yogurt and cheese daily. Asked why some are pressing for a changed recommendation to fewer daily servings, he said there “have been studies in various part of the world” that found “natural hormones in cows’ milk – which cannot be removed or destroyed by pasteurization” – could increase the rate of prostate cancer in men. “Women are not especially bothered by the cows’ hormones in milk,” he said.At a recent conference, one of the ministry’s staffers recommended only two portions daily, but this was not official policy, Grotto said, insisting that the dairy board has “no influence” on ministry policy, even though it gave some money to the ministry’s chief scientists for “objective” studies on milk, some of which were positive about dairy products and others that were not.But Prof. Naama Constantini, one of the country’s leading sports medicine specialists and chairwoman of the ministry’s National Council for Women’s Health, told the Post that the American Dietetic Association comes out every five years with recommendations for American consumption of food. In the last statement in December 2015, it repeated its previous recommendation that children and adults consume three portions of preferably low- or no-fat dairy products per day.“Official Israeli recommendations have not changed, and these guidelines are what are taught to medical students, doctors and clinical dietitians,” said Constantini, who is an unpaid member of the Dairy Board’s scientific council, which is headed by respected internal medicine specialist Prof. Yehuda Shonfeld.She said she joined as a volunteer because she was very worried about low calcium levels in Israelis.“There are many opponents to milk consumption who have a wrong ideological position or have vested interests to market competing products to raise calcium levels at much higher prices,” Constantini said.Constantini, who works in the orthopedics department of Hadassah-University Medical Center, said she treats many teenagers who are found to have very low calcium levels because they don’t drink milk due to “warnings” they have heard against it.Israeli and foreign studies have shown that youths who are allergic to milk or lack lactase have serious shortages of calcium and thus are at high risk to suffer from osteoporosis (bones with low density and a resulting risk of fracture and even fatal complications) when they are older.The sports medicine expert said that the Harvard statement was “only a personal opinion” expressed by a Harvard staffer at a conference and that the university has not changed its recommendations for higher consumption of dairy products. The highly fit Constantini, who has seven fit grown children who regularly perform sports, has a refrigerator full of milk and other dairy products.The US recommendation is to consume 1,300 milligrams of calcium daily, but it is almost impossible to eat enough cabbage, almonds and sardines with bones to fill that requirement without consuming dairy products, she added.
Sign up for the Health & Wellness newsletter >>