The past two months have seen five children die after being forgotten in the car in the intense summer heat. 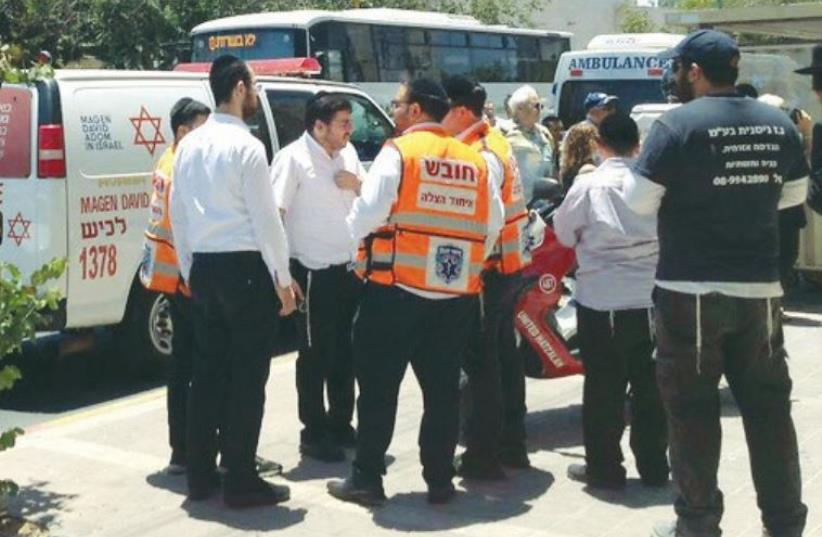 AMBULANCE STAFF in Ashdod attend the scene on May 30 where an infant left in a car died.
(photo credit: UNITED HATZALAH‏)
Advertisement
The Knesset Special Committee for the Rights of the Child convened for an emergency meeting on Monday to discuss prevention of parents forgetting children in the car.The past two months have seen five children die after being forgotten in the car in the intense summer heat. Committee chairwoman MK Yifat Shasha Biton (Kulanu) opened the discussion by reading the names of the children.According to NGO Beterm – Safe Kids Israel since 2008 there have been 400 incidents involving 449 children in which parents forgot or left their kids alone in the car. Of these, 23 were fatal.Health Minister Yaakov Litzman (United Torah Judaism) said at the opening of the discussion that his office would take responsibility to enlist the cooperation of the relevant ministries to find solutions to combat the phenomenon."The things that have happened have caused an awakening, it is possible to prevent it and we need to reach a solution,” Litzman said.“The health ministry will coordinate the issue, within a week we will hold an additional meeting, we will convene all the relevant ministries in the coming days,” he said.He called on all the relevant ministries to mobilize towards reaching a solution.MKs Karin ElHarar and Uri Malkeb said that to date no ministry has taken responsibility for addressing the phenomenon despite the availability of numerous solutions - ranging from dozens of technical devices that alert parents when children are left in the car to legislation proposals.The discussion focused mainly on a proposal submitted by MK Shasha-Biton, which was approved by the Ministerial Committee for Legislation on Sunday, and that would require educators to call the parents of young children who did not arrive at day care center or school and inquire as to their whereabouts within an hour after the start of the school day.The debate escalated when Lily Pokmonsky, head of the caregivers department at the education ministry, voiced her opposition to the bill stating that it would place the responsibility on the caregivers and lead to criminal liability.“Once this becomes a law it becomes a requirement, and the moment that she [teacher] does not do it, she will be charged criminally. You cannot harm 18,000 caregivers," she said.MK Shasha-Biton emphasized that the bill would not constitute criminal liability or any sort of sanctions.“How did a process of saving children turn into a scary propaganda that will put caregivers in jail? We did not aim for this, we are losing too many children and we cannot remain apathetic,” she said.“At no point did we talk about criminal liability or punishment or taking away the responsibility from parents," she said. "Because I know that educators work from the soul I ask them to take part in the effort.”MK Shasha-Biton said she would be willing to discuss additional options that were not legislation to enlist the support of the caregivers.Head of Beterem Orly Silvinger said that this has been a “lethal summer.”She called for a multi-layered approach to preventing hot car deaths, “if one layer fails, there should be another to protect the children,” she said.She added that one of the best tools at their disposal was to raise public awareness of the issue and launch a campaign as soon as possible “unless we want to end the summer with more child deaths.”MK Shasha-Biton concluded the discussion and said that in a week's time all the relevant ministries would convene to finalize solutions to address the phenomenon.
Sign up for the Health & Wellness newsletter >>