NASA’s New Horizons unmanned spacecraft, which was launched nine-and-a-half years ago, will fly past the “dwarf planet” that it is called now at the closest-possible distance. 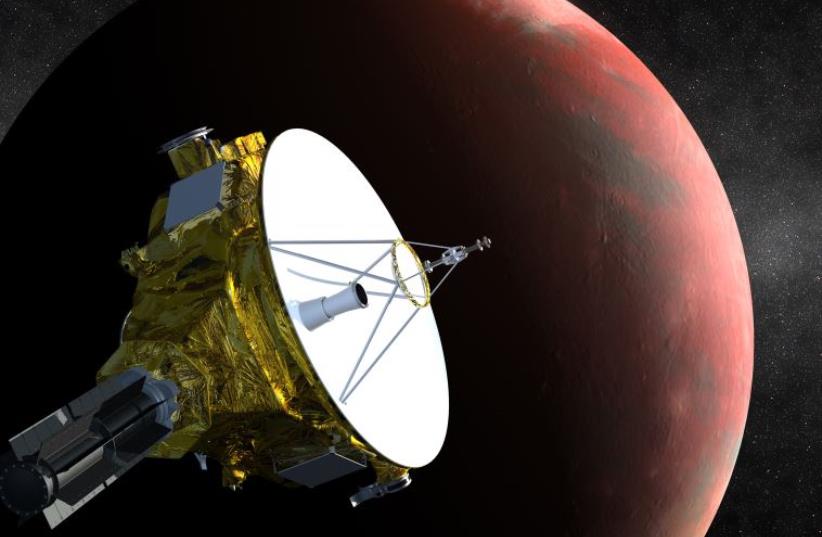 An artist's impression of NASA's New Horizons spacecraft
(photo credit: REUTERS)
Advertisement
Tuesday is the day that the US National Aeronautics and Space Administration and countless space enthusiasts have waited for – NASA’s New Horizons unmanned spacecraft, launched nineand- a-half years ago, is set to fly past Pluto at the closest-possible distance.Pluto, formerly the ninth planet in the solar system, was discovered 85 years ago, but was downgraded to the status of “dwarf planet” in 1992 following the discovery of the Kuiper belt – a ring of objects beyond Neptune.The outer-space mission has only one chance, as the spacecraft is traveling very fast and will not return to the area, but NASA engineers are not worried, as they are sure that New Horizons is in excellent shape.Having already collected some fuzzy images from farther away, New Horizons is set to gather on Tuesday detailed photographs of Pluto – which lent its name to Mickey Mouse’s animated dog – as well as other important data about the birth of the solar system.In the past few days, the spacecraft has sent images of Charon, the dwarf planet’s largest moon. These surprised NASA because they showed the moon looked very different from what Pluto is expected to resemble. Pluto also has smaller moons named Styx, Nix, Kerberos and Hydra.Prof. Yitzhak Ben-Yisrael, the chairman of the Israel Space Agency of the Science, Technology and Space Ministry, told The Jerusalem Post that he was very excited about the historic event.“Pluto was once thought to be a moon of Neptune, but then it was ruled out. It may be a pair with that planet, each circling the other, each one sometimes closer to us,” he said.Ben-Yisrael is keeping his eye on Pluto’s expected high-resolution photos, but it could take as long as a year to assess the data sent by New Horizons.The spacecraft will not land on Pluto as it is very complicated.“Spacecraft have in the past have landed on comets, which are made completely from ice. In fact, a NASA unmanned vehicle landed on a comet about six months ago,” he said.Pluto’s surface is believed to be composed of more than 98 percent nitrogen ice, with traces of methane and carbon monoxide.With comets, scientific information is frozen way below the surface, so you have to send a space vehicle there to get data. Pluto is composed mostly of ice, and information can be obtained by passing it, he added.“It used to be thought that Pluto too is a comet, but its density is twice as much as in a comet. From this mission, we will learn basic scientific knowledge about the solar system,” said Ben-Yisrael.“It will not immediately or directly benefit mankind – it won’t cure the common cold or reduce the number of pupils in our classrooms, but we will learn more, and in 20 or 30 years, the information could have implications on our lives and lead to the development of new technologies.”The Israeli space agency head would “love to land on Mars,” which is the next challenge.“I am an advocate of returning to the Moon, because to reach Mars, the only way would be to build a base station on it and then ‘jump’ to the Red Planet.We can’t reach Mars directly.”Pluto, the former planet, is the last planet in our solar system to be visited by unmanned spacecraft.
Sign up for the Health & Wellness newsletter >>