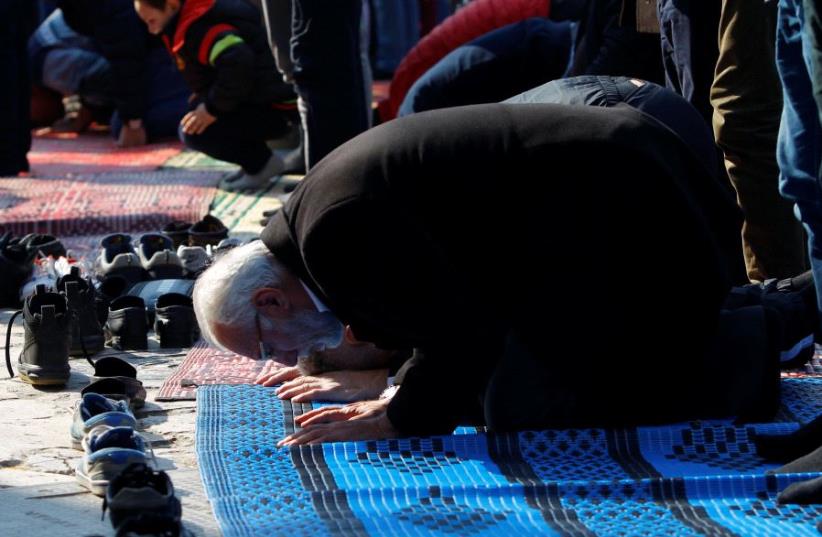 Muslims pray during Friday prayers on the street near the Murat Pasha Mosque in the old town of Skopje, Macedoni
(photo credit: REUTERS)
Advertisement
Observant Muslims who perform their traditional prayer ritual – called salat – may benefit not only spiritually but also physically. Scientists at Binghamton University in New York have determined that when done properly, it can reduce low-back pain.Some 1.6 billion Muslims around the world bow, kneel and place their foreheads on the ground during prayer five times a day, facing the direction of their holy city of Mecca in Saudi Arabia. The ritual is one of the five obligatory pillars of Islam, as described in the Koran.According to industrial engineering Prof. Muhammad Khasawneh, the complex physical movements of the ritual can reduce lower-back pain if performed regularly and properly. He and his interfaith team published their findings in the latest issue of the International Journal of Industrial and Systems Engineering.“One way to think about the movements is that they are similar to those of yoga,” he said. While the research focused specifically on Islamic prayer practices, similar movements are also found in Christian and Jewish prayer rituals, as well as in yoga and physical therapy.
Adhan , Muslim call to prayer , sung by a Muezzin in Mecca , Saudi Arabia at a central mosque during the Hajj , or pilgrimage [credit: INTERNET ARCHIVE , archive.org]
Jewish ritual does not allow reaching the floor during prayer except on Yom Kippur, but many Orthodox Jews move the top parts of their bodies vigorously while praying.“Physical health is influenced by socioeconomic, lifestyle and religious factors. Moreover, studies indicate that there is a strong association between prayer and vigilance about maintaining a physically healthy lifestyle,” Khasawneh said. “Prayer can eliminate physical stress and anxiety, but there is also research that indicates prayer rituals can be considered an effective clinical treatment of neuro-musculoskeletal dysfunction.”The team analyzed statistics based on the movements of computer-generated models of healthy Indian, Asian and American men and women and models with lower-back pain. They found that the bowing portion is the most stressful on the lower back, but for individuals with lower-back pain, using proper knee and back angles during the ritual can reduce pain.The maximum compression forces created during prayer postures are much lower than the safety limits set by the US National Institute for Occupational Safety and Health, and the movements can be safely considered a clinical treatment for lower-back pain, according to Khasawneh. “Based on the pain level, a combination of back and knee angles can be identified,” he added.For those with back pain, maintaining exact prayer postures may not be possible. According to Islamic traditions and practices, if individuals cannot stand, they are allowed to pray in a seated position or while lying down. If they are able to stand, they should attempt to maintain the correct postures.“The kneeling posture, sujud, increases the elasticity of joints. It is recommended for these individuals to spend more time in the kneeling posture,” Khasawneh said.According to the research team, using incorrect angles and movements can increase pain. The team also suggested that further study is needed for physically handicapped individuals, those with more extreme body types and women – especially pregnant ones – to find the best movements for these groups. The group plans to further validate the findings with experiments, using sensors and cameras to track the stress on individual body parts during the prayer ritual.
Sign up for the Health & Wellness newsletter >>