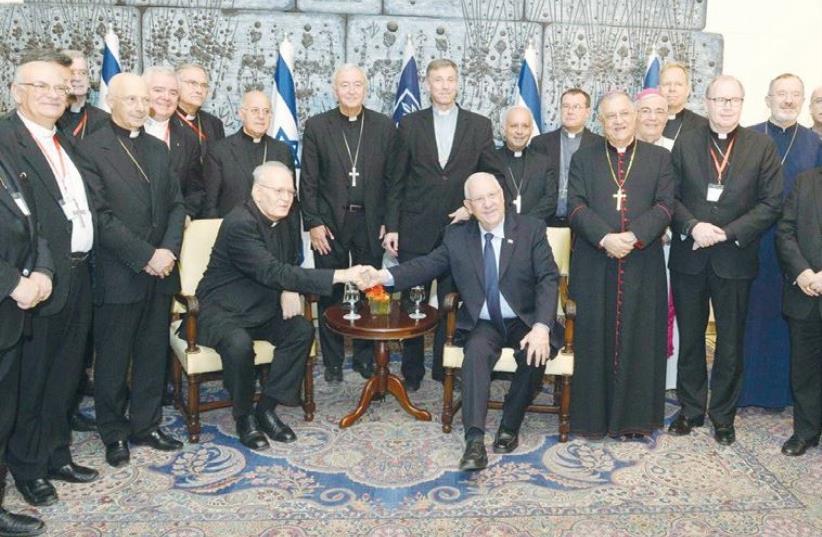 PRESIDENT REUVEN RIVLIN hosts the Council of the Bishops’ Conferences of Europe at his residence in Jerusalem
(photo credit: MARK NEYMAN / GPO)
Advertisement
The hope that solutions will soon be found to Christian issues in the Holy Land, “especially in the field of education,” was voiced Wednesday by Cardinal Peter Erdo, president of the Council of the Bishops’ Conferences of Europe at a reception hosted at his official residence by President Reuven Rivlin.Speaking on behalf of the European Episcopal Conference, Erdo said it was very special for conference participants to meet in Jerusalem, as the gathering was also by way of a religious pilgrimage.Erdo, who is the archbishop of Esztergom-Budapest and Primate of Hungary, in referencing the main topics of the conference, said there was closeness to the Christians of the Holy Land, and that participants who came from as far afield as Ireland, Russia, Turkey and Norway, as well as many other parts of the world, expressed their solidarity with Christians who are being persecuted, as well as those in need.He emphasized the importance of Christians becoming partners and integrating with the aspirations of their countries of domicile.The conference was held in advance of the 50th anniversary next month of the Nostra aetate – the Second Vatican Council’s Declaration on the Relation of the Church with Non-Christian Religions.Erdo was pleased that Rivlin had been to Rome two weeks earlier, to speak with Pope Francis, and in this context spoke of Judeo-Christian ideals and the importance of inter-religious dialogue.As for the State of Israel, Erdo said that conference participants admired the dynamism and the vitality of the state and its people, adding that it is important that Christians and society, in general, form a realistic and empathetic view of the history of the Jewish People and of Israel.Rivlin, who met with Christian clergy and visited several Christian holy sites before going to Rome, said that in the last few years, Christian communities in the Middle East have paid for their faith and that Israel, as a Jewish and democratic state was proud that Christians in Israel enjoy freedom of worship and do not fear for their lives.Rivlin made the point that Jews also know what it means to hide one’s faith for fear of losing one’s life. Even today, he remarked, there are many places in which Jews do not wear kippot in the street.“When there has been vandalism at holy sites, we stood together and continue to stand together with the Christian community to condemn these terrible acts,” he said. “An attack on any place of worship is an attack on all of us.”Rivlin stressed it was not enough for Israel to be only a safe haven for the Christian community. “We want the community to flourish, to play a part in the Israeli experience and to be part of Israeli society,” he said.Adding that he knew that there were issues of concern in the Christian community, Rivlin refrained from mentioning the matter of funding for Christian schools. Rabbi Davis Rosen, the international director of interreligious affairs of the American Jewish Committee and honorary advisor on interfaith relations to the Chief Rabbinate of Israel, was the only Jewish clergyman present.When asked by The Jerusalem Post about funding for Christian schools, Rosen replied: “The Christians are victims of internal Israeli politics. The loss of their funding is not directed at Christians, but is a by-product of the horse trading by different Israeli political interests.”Rosen advocated that the status quo be restored as soon as possible.Rivlin, in the opening of his address, spoke of the death of Jerusalemite Alexander Levlovitz, who had lost his life on the evening of Rosh Hashana when his car went off the road after terrorists had allegedly thrown rocks at it. “This bloody attack shows us once again that terrorism is terrorism whether with rocks, guns or other weapons,” he said, “and it shows that we must act firmly against all terrorism.
sign up to our newsletter