Evangelicals' role is to be an ‘articulate advocate’ for Israel, Eagles’ Wings founder says

Rev. Robert Stearns says he sees an even stronger relationship between Jews and Christians in near future. 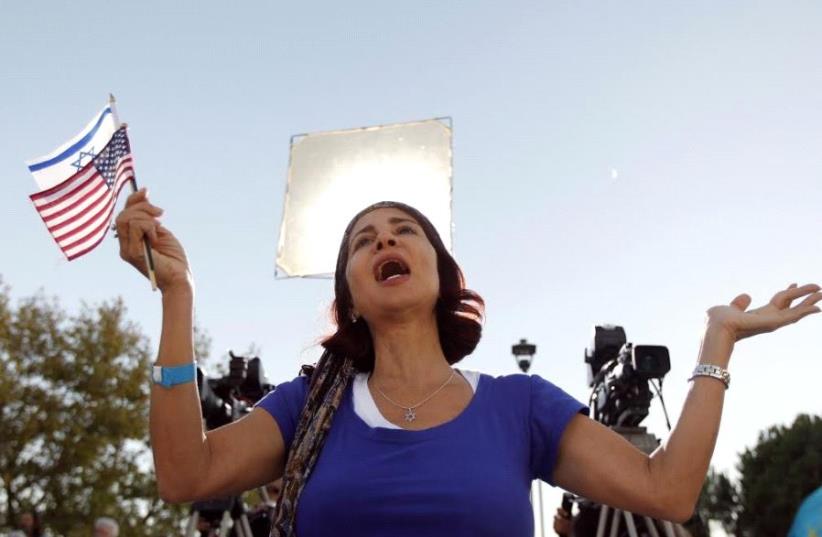 A worshiper, holding an American and an Israeli flag, prays during The Day of Prayer for the Peace of Jerusalem, on Jerusalem’s promenade, in 2011.
(photo credit: BAZ RATNER/REUTERS)
Advertisement
Evangelical Christians can be a major player on the world stage, and especially for Israel, the founder and executive director of a global movement of churches, ministries, and leaders said. “The evangelical Christian community has a distinct place of influence with regards to Israel, because as a non-Jewish group we now represent millions of people who support Israel and the Jewish people. What takes place in Israel affects the Christian community, as well as all Americans who believe in the principles of the Bible,” Rev. Robert Stearns of Eagles’ Wings told CAMERA Christian media analyst Tricia Miller, ahead of CAMERA’s “Should Christians Stand with Israel?” event on March 19 and 20, which is being hosted by Stearns. “To support Israel and become an articulate advocate in her defense is one of the most vital things we can do today, to make an impact not only in Israel but in the whole world.”Stearns, whose articles have appeared in The Jerusalem Post and The Jerusalem Post - Christian Edition monthly magazine, is also the founder of the worldwide prayer initiative The Day of Prayer for the Peace of Jerusalem, which is observed every year on the first Sunday in October.CAMERA’s Partnership of Christians and Jews counters the bias and error that forms the foundation of the current assault on Evangelical support for Israel by providing educational resources through articles, speakers and conferences.Stearns told Miller that after having lived in Jerusalem, he realized how important Israel was to his faith.“I was confronted by the reality that the Jewish men at the Western Wall were praying to the same God that I was – the God of Abraham, Isaac and Jacob,” he said. “This drove me to search the Scriptures further, where I discovered God’s everlasting covenant with the Jewish people – a covenant that has remained throughout centuries of human history. From that moment, a turning point took place in my life in which I began to realize the vital importance of this people and this land, not only to my own life but to my entire faith community and to the defense of truth everywhere.”Asked about any underlying agenda to the support for the Jewish people and Israel, Stearns said the narrative is not about the apocalyptic end-of-times scenario anymore.“There is a new desire in the Christian community to deeply internalize the Jewish roots of our faith and to support Israel without conditions, simply to let her know that we are committed to standing together,” he said. “Over the years I have brought thousands of Christians to Israel, both pastors and lay people, and there is an unparalleled depth of connection that is being created between our two faith communities. I believe we will see in the future an even stronger relationship between Jews and Christians, as we focus together on the much greater scope of what unites us than what divides us.”Topics and discussions for this event include: Why Should Christians be Zionists? by Rev. Gerald McDermott; The Jewish Roots of Christianity by Prof. of Biblical Literature Brad Young; The New Church Struggle by CAMERA Christian media analyst Dexter Van Zile; The Future of Evangelical Support for Israel by Miller; and Implications of the Growing Jewish Christian Alliance, by Stearns. The event will take place March 19-20 at the Tabernacle in Orchard Park, New York, outside Buffalo.Other than sharing many of the Judeo-Christian values, Jews and Christians around the world also share the same enemy in radical Islam, Stearns said. And in a message to the Jewish people, Stearns said the Christianity that was able to commit so many acts of hatred against the Jews over the last two millennia is not an accurate representation of the religion that he believes in today.“In this hour, there is a new opportunity to come together as those who serve the God of Abraham, Isaac and Jacob,” Stearns said. “I want to say to the Jewish people that we are with you, that we honor you, and that we look forward to growing in this vital relationship together in the days to come.”
sign up to our newsletter