Hagee: Israel will always be the victor 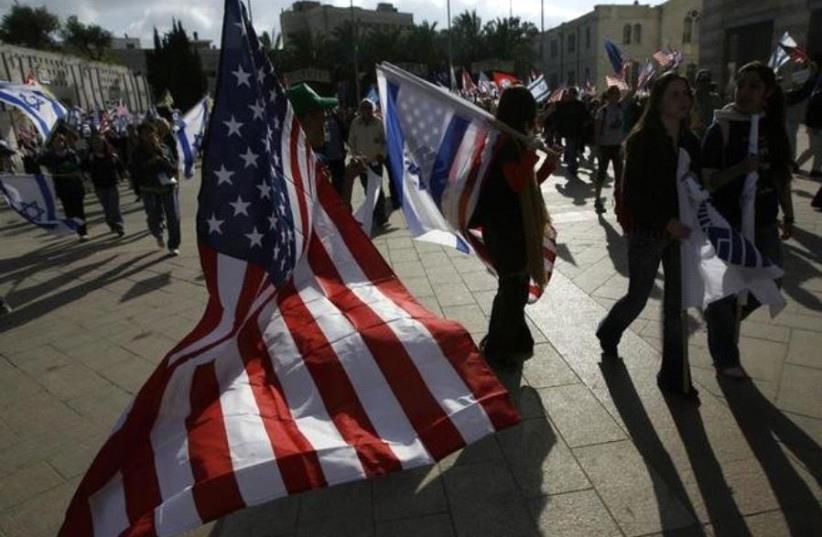 Members of Christians United for Israel march to show solidarity with Israel, in Jerusalem, in 2008.
(photo credit: ELIANA APONTE/REUTERS)
Advertisement
For almost 70 years, the State of Israel has seen its enemies attempt numerous wars and many different methods of attack. But for all that they try, they will never have the advantage, Pastor John Hagee said. “Israel’s enemies may continue to adapt but they will never be able to outmaneuver the hand of almighty God,” he said at the 12th annual Christians United for Israel Summit in Washington on Monday to thundering applause. Celebrating 50 years of Jerusalem’s reunification, the San Antonio pastor and founder of the CUFI organization told the audience how Israel’s enemies constantly changed tactics, going from conventional war, to guerrilla fighting, to terrorists planting bombs in buses, to suicide bombers blowing themselves up in cafes, to firing rockets and trying to infiltrate Israel via terrorist tunnels. Mentioning the newest front – the boycott, divest and sanctions movement – Hagee said that the threats will continue. “BDS is a manifesto void of any ideology, other than hatred with the sole mission of total and complete destruction of the economy of the State Israel,” he said. God will always be there, but that doesn’t mean that the role Christians, including the 3.5 million grassroots members of the organization, must play has diminished. “[The war on BDS] will yield less bloodshed, but the same result [as a conventional war is what the enemy is trying to achieve]: the destruction of Israel,” he said. “BDS is economic antisemitism, and it must be stopped in every state of the United States of America.” Hagee said that 22 states already passed legislation to sanction companies that sanction Israeli companies, “shutting them off at the gate,” and he previously mentioned that by the end of the year, CUFI expects more than half the states in the Union to have advanced anti-BDS measures.“If you think you are going to punish Israel, we are going to punish you,” he said. “Victory is going to be ours.”
In his opening remarks, Hagee said that the organization held its first summit just as Israel was beginning the 2006 Second Lebanon War, and it has been supporting the Jewish state at its summit in other difficult times, such as 2014’s Operation Protective Edge and in 2015 when the Obama administration reached a deal regarding Iran’s nuclear power, which was “an absolute betrayal of Israel and the Jewish people.”Things are different in 2017, however. Mentioning how “God provided friends” like US President Donald Trump and Vice President Pence who are determined to help Israel, the audience gave a standing ovation. Recalling the events of the 1967 Six Day War, Hagee said UN peacekeepers just ran away from protecting Israel before the war when the Egyptian president asked them to because he wanted to attack Israel. “The UN seems to never change.”Yaki (Jacob) Hetz, a 55th Brigade reservist paratrooper who fought in the battle to liberate Jerusalem, received an award from CUFI. Fighting in the trenches in Ammunition Hill, Hetz took over command, being wounded by shrapnel, and eventually led his men to victory, receiving Israel’s highest military decoration. “I am receiving the [CUFI] award, but I am the representative of hundreds of thousands of Israeli fighters,” he said.
A grandson of a Holocaust martyr, Hetz said that he prayed for the Isaiah 2:4 prophecy to be fulfilled, “but in the Middle East, Israel must remain strong.”David Brog, the director of CUFI, said that the anti-Israel propaganda on university campuses must be stopped.
“50 years ago the Jews dared to fight back and dared to survive. That’s not a tragedy. That’s a miracle!” sign up to our newsletter