"No church or humanitarian organization should send a single cent to Gaza as long as it is run by a band of murderous terrorist bandits." 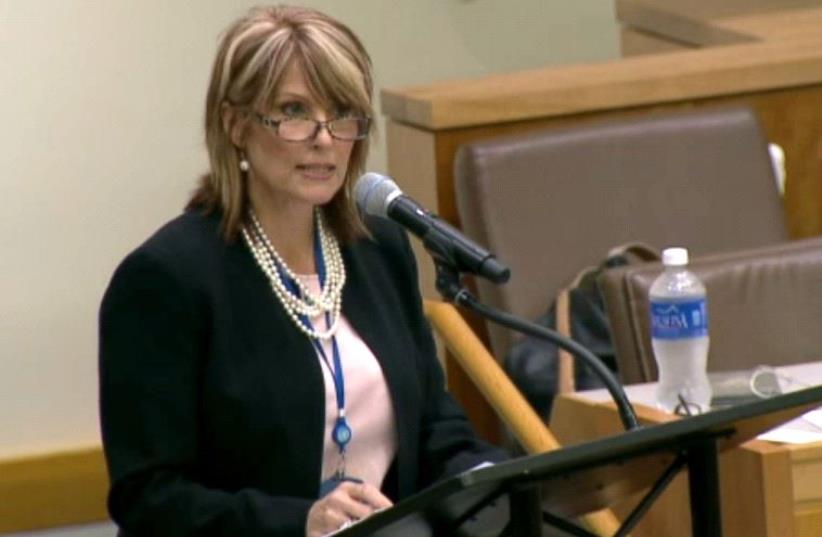 Laurie Cardoza-Moore speaking at the United Nations.
(photo credit: PJTN)
Advertisement
All international humanitarian organizations need to immediately halt all aid money to Gaza until it can be proven that the money isn’t being squandered by Hamas, a leading Christian-Zionist said Wednesday.“The enemy of the people of Gaza is Hamas, not Israel. Hamas has hijacked the coastal strip and rules over its people with an iron fist. For decades, the leadership of Hamas has robbed its people of aid money,” said Special Envoy to the United Nations Laurie Cardoza-Moore. “The time has come to halt all aid money into the Gaza Strip as long as Hamas is in control.” Her position comes hours after a UN employee in Gaza was indicted for funneling charity donations to fund Hamas naval units and days after a representative of the Evangelical World Vision organization was accused of channeling up to $50 million in charitable donations to the Islamist group.Cardoza-Moore represents the World Council of Independent Christian Churches at the UN and is president of the Evangelical Christian organization Proclaiming Justice to the Nations.“If the international community wants to help the impoverished people of Gaza, they must work to free them from Hamas,” she said. “It is unacceptable that hundreds of millions of dollars are likely being directly transferred to the coffers of an international terrorist organization in the name of Christianity and humanity. No church or humanitarian organization should send a single cent to Gaza as long as it is run by a band of murderous terrorist bandits.”Cardoza-Moore contacted World Vision last week to clarify how an Evangelical Christian organization could hire a Hamas terrorist sympathizer to distribute aid money. She has not received a response. She has also lodged a formal complaint with the UN Development Program and demanded that they immediately stop distributing aid to Gaza.Proclaiming Justice to the Nations, a non-profit organization, was established to educate Christians about their Biblical responsibility to stand with their Jewish brethren and Israel, utilizing powerful film and video presentations, a variety of grassroots rallies, events and speaking engagements to facilitate dialogue between the Christian and Jewish communities in support of the State of Israel and against global anti-Semitism.Cardoza-Moore finished her fourth pro-Israel documentary, Hating Israel: In Search of the Truth Behind BDS, which had its global premiere in Jerusalem’s Cinematheque on June 8.
Sign up for our Christian World newsletter >>