Visiting US Evangelical pastors: We stand unconditionally with Israel

24 young American pastors came to Israel on a trip designed to educate them and, through them, their congregations about the Jewish state and the challenges it faces. 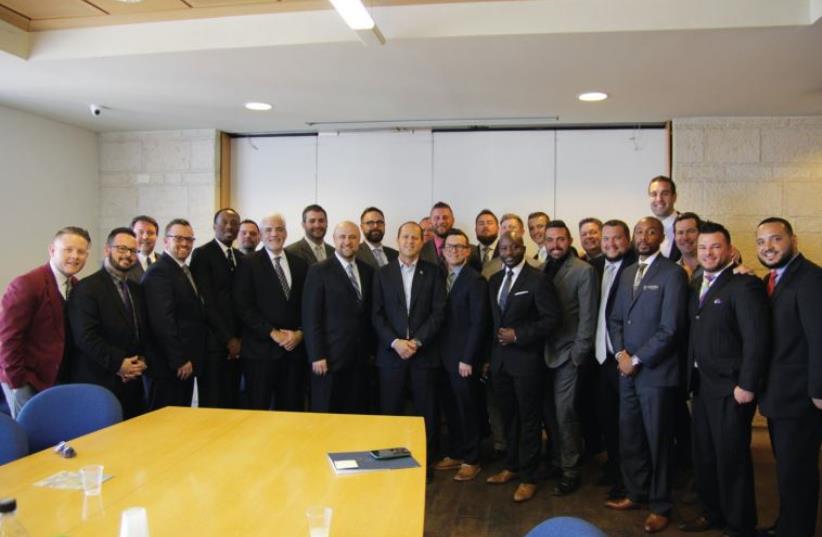 JERUSALEM MAYOR Nir Barkat (center) poses with pastors from the Eagles Wings Evangelical Group at his office on Monday.
(photo credit: EAGLES WINGS)
Advertisement
Rev. Robert Stearns, a leading Evangelical figure from the United States, says it is crucial to educate the younger generation of Evangelical Christians in the US about the movement’s strong connection to Israel.Stearns, who is co-chairman of the Eagles Wings Evangelical Christian Organization, a global group that trains Evangelical leaders, brought 24 young American pastors to Israel on a trip designed to educate them and, through them, their congregations about the Jewish state and the challenges it faces.He cited the aftermath of the Holo - caust, the birth of Israel and its early struggles as having motivated older Evangelicals, adding that current pub - lic campaigns against Israel, such as the Boycott, Divestment and Sanctions (BDS) movement, have since taken hold. While in the country, the group has met with several dignitaries, including Jerusalem Mayor Nir Barkat, Internal Security Minister Gilad Erdan and mem - bers of the Knesset Christian Allies Cau - cus. It has also visited both Jewish and Christian holy sites.Pastor Rusty Nelson, 51, who heads a congregation of 5,000 Evangelicals in Huntsville, Alabama, spoke of what he described as the natural connection of Christianity to Judaism.“We understand our heritage. We believe that we have become part of a covenant that was made with Abra - ham,” Nelson told The Jerusalem Post . “We come prayerfully, in a unified embrace that says we support you in the land that God has given you; we support you in the covenant that God has made with you.”Pastor Todd Schumacher, who heads an entire network of churches, said his and the Evangelical movement’s support for Israel was immutable.“We stand unconditionally with Israel, recognizing it as the root of our faith and what we believe, and that without it, where would we be?” Schumacher said.Dwayne Hardin, another pastor with the group and head of some 10,000 con - gregants in churches in the US and far - ther afield, was similarly unequivocal in his enthusiasm for supporting the Jewish state.“It’s difficult to disconnect from the womb that gave birth to you. We are the result of Judaism; we’re grafted in, and no matter what, we’re all connected,” he told the Post .The pastors all said they were unmoved by political issues, emphasizing the reli - gious aspect of their connection to the Jewish people.“We didn’t come to be political, we want to come and be biblical,” said Nel - son. “The biblical aspect is the link of our faith. We are very strong with the knowledge that this land does belong to the Jewish people. Politically, there will be decisions made here and in the US, and its not for us to speak.”
sign up to our newsletter