They were all his children

Holocaust hero Janusz Korczak broke down religious barriers and stood up for orphans. 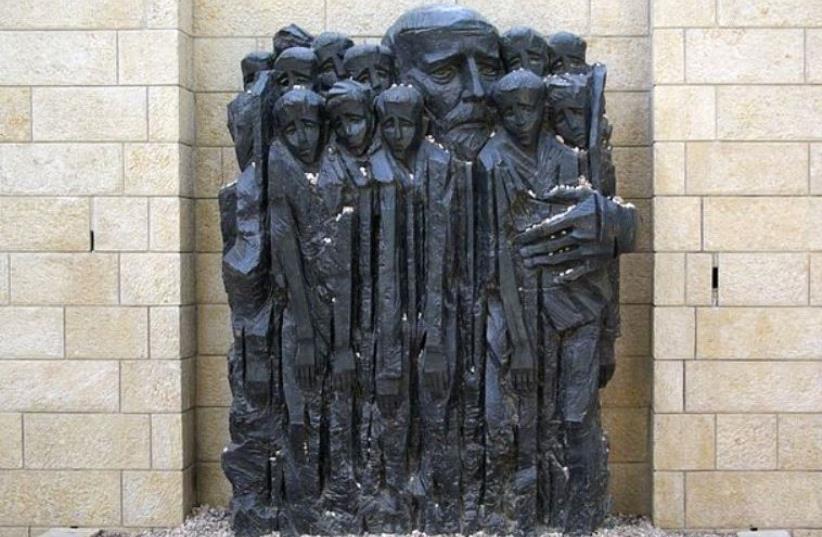 Janusz Korczak and the children, memorial at Yad Vashem.
(photo credit: Wikimedia Commons)
Advertisement
For many, the decision would have been difficult, but for Janusz Korczak it wasn’t debatable at all. When in 1942, the Nazis came to the Warsaw Ghetto to transport the Jewish Polish-born children’s educator and the almost 200 Jewish orphans under his auspices, there was no regret on Korczak’s part that he didn’t take up the offer from his Christian friends to be moved to the “Aryan side” of town.  Instead he dressed them up in their best clothes and stayed with them the entire time, making sure they would never feel alone. Korczak, the pen name used by Józef Goldszmit, was that type of person. He was born in Warsaw in the late 19th century, and early on in his life felt the need to dedicate his life to bettering the experience and rights of children, and particularly of orphans, regardless of their religion.To that extent, throughout Korczak’s life he constantly found himself in roles helping children. In “The Gate of Light” by Adir Cohen, the author writes that during his time in medical school one of his colleagues noticed that he “had an amazing ability to control the youngsters without raising his voice” during Korczak’s volunteer work at the Free Reading Halls of the Warsaw Society of Charity.Korczak had also began writing, and achieved one of his first successes with a play satirizing the way he was brought up. He continued writing, churning out his first book “Children of the Streets” in 1901, which was based on his experiences volunteering to tutor impoverished and orphaned young students.After he graduated from medical school he took up a practice as a pediatrician, receiving acclaim for his medical abilities from Jewish and Christian neighbors alike, something that was not the norm in early 20th century Poland. He continued writing children’s books, churning out classics “King Matt the First” and “Kaytek the Wizard,” and even had his own radio station where he spoke about the rights of children. On August 7, 1942, Korczak was exterminated in the Treblinka death camp. A sculpture in Jerusalem’s Yad Vashem by Boris Saktsier honors Korczak and his actions.He is remembered as someone who succeeded in breaking down religious boundaries in the name of humanity, and as someone who stood up for what he believed in, regardless of the consequences. To learn more about Jewish-Christian relations, check us out at @christian_jpost, on Facebook.com/jpostchristianworld/ and see the best of the Holy Land in The Jerusalem Post - Christian Edition monthly magazine.sign up to our newsletter