This day in history: Napoleon in the Holy Land 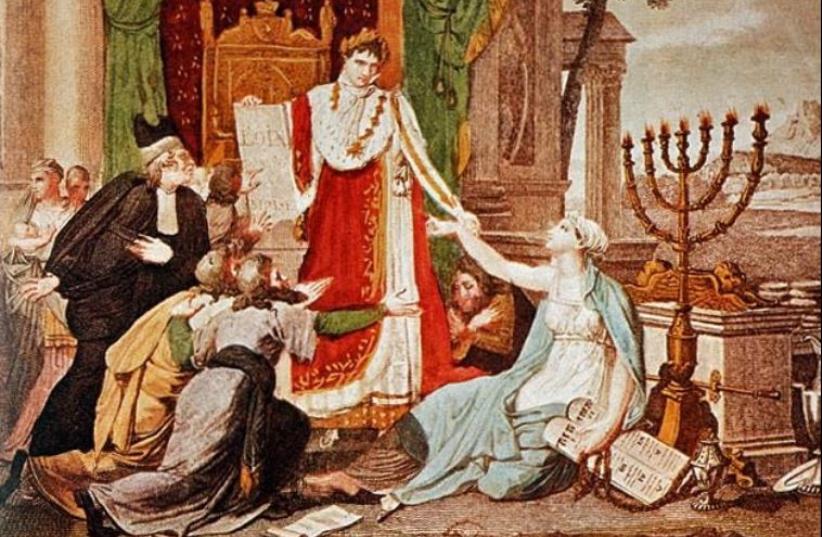 An 1806 French print depicts Napoleon Bonaparte emancipating the Jews
(photo credit: Wikimedia Commons)
Advertisement
On this day in history, February 25, 1799, French leader Napoleon Bonaparte captured Gaza, subsequently moving north along the coastal plain and defeating Ottoman governor Jazzar Pasha’s troops at Jaffa and Haifa, before retreating back to Egypt after the siege on Acre. The online Jewish Virtual Library wrote that following the campaign in the Ottoman-ruled territory, the official newspaper of the French government “Le Moniteur Universel” published a manifesto declaring that Napoleon had promised that all Jews would be able to return to their homeland, in the ancient territory of the Israelites. “Bonaparte has published a proclamation in which he invites all the Jews of Asia and Africa to gather under his flag in order to re-establish the ancient Jerusalem. He has already given arms to a great number, and their battalions threaten Aleppo,” the translation read. The online encyclopedia raises doubts however whether the French emperor actually made such a statement. With the defeat of the French in Syria, the plan could never be carried out anyway. Regardless, the military leader, who was raised a Catholic but  who never really practiced his faith, played a crucial role in improving the status of the Jews in his empire, as well as the status of other religious minorities, such as Protestants in Catholic countries and Catholics in Protestant countries. He emancipated the Jews from the ghettos and established laws granting all citizens freedom of religion and free exercise of worship, provided that it did not contradict public order.Historian Rabbi Berel Wein said the he believes that Napoleon’s actions were intended to assimilate the Jews. Canadian Napoleonic scholar Ben Weider wrote that the 18th-19th century French emperor once made a statement summing up his views on his rule and religious opportunism:“It is by making myself Catholic that I brought peace to Brittany and Vendée. It is by making myself Italian that I won minds in Italy. It is by making myself a Moslem that I established myself in Egypt. If I governed a nation of Jews, I should reestablish the Temple of Solomon.”After the last reunion of the Grand Sanhedrin in 1806, an assembly of leading Jewish figures that the French emperor had reestablished, Weider wrote that Napoleon was proclaimed the modern “Cyrus.”

To learn more about Jewish-Christian relations check us out at @christian_jpost, on Facebook.com/jpostchristianworld/ and see the best of the Holy Land in The Jerusalem Post - Christian Edition monthly magazine.sign up to our newsletter