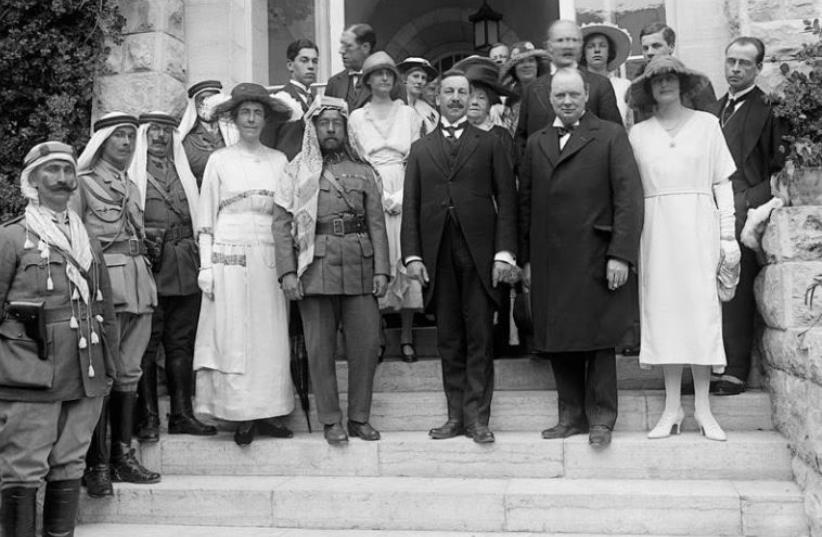 Mr. and Mrs. Winston Churchill (first and second right) in Jerusalem, with Sir Herbert Samuel (third right) and Emir Abdullah of Transjordan (fourth right)
(photo credit: Wikimedia Commons)
Advertisement
On March 29, 1921, British Prime Minister Winston Churchill spoke in front of 10,000 people on Jerusalem’s Mount Scopus, describing his support of Zionism and the founding of a future Jewish state. In the 1921 Report on Middle East Conference held in Cairo and Jerusalem, Churchill is quoted as saying that if the Jews in Israel would work diligently toward their goal of establishing a Jewish state, then the Holy Land would turn into the promised land, as prophesied in the Bible, "a land flowing with milk and honey, in which sufferers of all races and religions will find a rest from their sufferings.” At Mount Scopus, Churchill participated in a palm tree-planting ceremony at Hebrew University, and Chief Rabbis Avraham Isaac Hacohen Kook and Yaakov Meir presented the British diplomat with a Torah scroll. Churchill was on an official visit to Cairo as the United Kingdom’s colonial-secretary, and had taken up his colleague High Commissioner of Palestine Herbert Samuel’s offer to visit the Holy Land. The then-colonial-secretary said Samuel had wanted him to see the country and discuss with him some of its problems on the spot.One of those issues was the Arab desire to expel the Jews. Churchill's response to Musa Kazim el Husseini, former mayor of Jerusalem and a prominent Arab leader, became one of the highlights of the trip and emphasized Churchill's support of the Jews and a Jewish state.“You have asked me in the first place to repudiate the Balfour Declaration and to veto immigration of Jews into Palestine. It is not in my power to do so, nor, if it were in my power, would it be my wish.  "It is manifestly right that the Jews, who are scattered all over the world, should have a national center and a national home where some of them may be reunited. And where else could that be but in this land of Palestine, with which for more than 3,000 years they have been intimately and profoundly associated?“We think it will be good for the world, good for the Jews and good for the British Empire. But we also think it will be good for the Arabs who dwell in Palestine.”An alley on the Hebrew University Mount Scopus campus was later named after Churchill.To learn more about the building of the modern State of Israel as envisaged by the prophets of the Bible check us out at @christian_jpost, on Facebook.com/jpostchristianworld/ and see the best of the Holy Land in The Jerusalem Post - Christian Edition monthly magazine.
Sign up for our Christian World newsletter >>