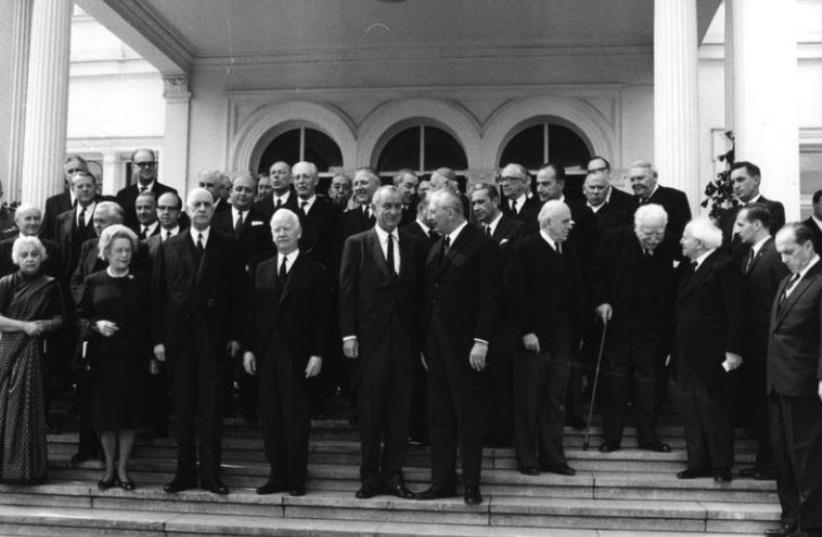 David Ben-Gurion (third right) attending Adenauer's funeral in 1967
(photo credit: Wikimedia Commons)
Advertisement
On March 14, 1960, only 15 years after the end of the Holocaust, Israeli Prime Minister David Ben-Gurion met with West Germany Chancellor Konrad Adenauer in New York to discuss mutual efforts and building a relationship.This wasn’t the first time German and Israeli officials met since the end of the Nazi atrocities in World War II, but it was the first time the two countries pledged to work together for a better future. In the first contact the countries had after the war, in 1951, Adenauer told his parliament that he had received calls from the State of Israel and Jewish organizations regarding reparations for Nazi atrocities. In his speech he said West Germany was ready and willing “to bring about a solution of the material indemnity problem, thus easing the way to the spiritual settlement of infinite suffering.”The reparations weren’t taken lightly in Israel. Even as the country struggled with a high unemployment rate and had few foreign currency reserves – which led to a policy of austerity in the 1950s – there were substantial protests against the move. Leading the movement against the reparations was future-prime minister and right-wing leader Menachem Begin, who said that Jewish honor shall not be sold for money and Jewish blood shall not be atoned by goods.Prime Minister Ben-Gurion’s pragmatism won, however, and Foreign Minister Moshe Sharett and Adenauer negotiated the reparations settlement, which came into effect in March 1953. Despite the German payments, the two countries did not have official diplomatic relations – which would only be established in 1965, five years after Ben-Gurion met with Adenauer – and there was no desire in Israel to begin a budding friendship with the country that had exterminated six million Jews less than two decades ago. But by choosing to meet in 1960, the two leaders made a bold decision to put the past aside and focus on the future.There was no official protocol of the two-hour meeting at the Waldorf Astoria Hotel, but those present said the two discussed German loan funds for helping to develop the Negev and other ways to help in create creative enterprises in the Jewish State. At the end of the talks, both leaders gave statements to the press, with Adenauer saying he was deeply moved by the meeting, and that he admired the statesmanship and steadfastness of the chief architect of modern Israel and its remarkable development.Ben-Gurion spoke of the importance to recognize that Germany had repented for its sins. “My people cannot forget its past – but we remember the past not in order to brood upon it, but in order that it shall never recur,” Ben-Gurion said. “I said in the Knesset, the parliament of Israel, last summer, that the Germany of today is not the Germany of yesterday. After having met the chancellor, I am sure that judgment was correct.”Ties between the two countries grew gradually, and today, Germany is one of Israel’s best friends, with the two states enjoying flourishing ties in military cooperation, trade, cultural programs and many other fields.