Today in History: Teddy Roosevelt and the Jews

TR believed that it is "entirely proper to start a Zionist state around Jerusalem." 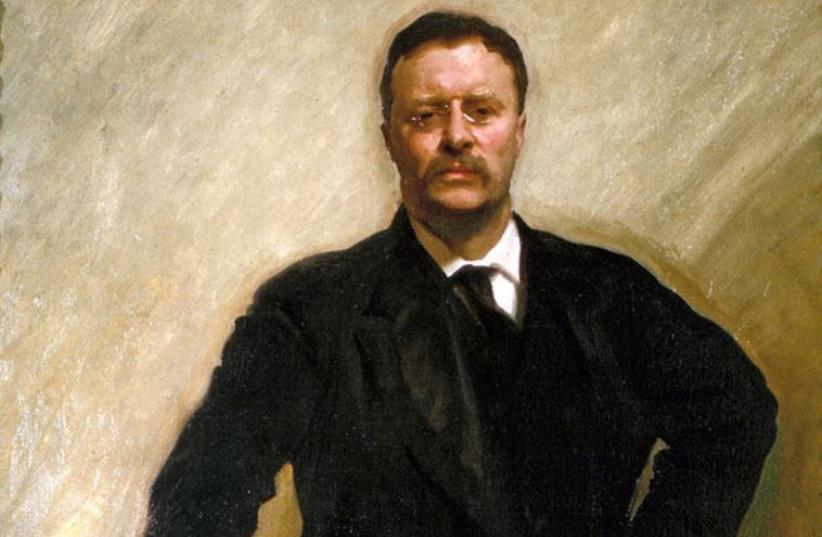 Official White House portrait by John Singer Sargent
(photo credit: Wikimedia Commons)
Advertisement
Prior to his presidency, Theodore Roosevelt had developed a special relationship with Jews from his time as police inspector in New York, encouraging them to serve and praising them for their dedicated efforts to keep the city safe. Roosevelt recounts in his autobiography that a German preacher, rector Hermann Ahlwardt, had decided to go on anti-Semitic crusade in New York to antagonize The Chosen People. Roosevelt assigned Jewish police officers to protect him, writing that the “proper thing to do was to make him ridiculous.”In 1899, his support was so high amongst Jewish Republican supporters that they printed Yiddish flyers for Roosevelt’s gubernatorial campaign alluding to his and the Rough Riders’ (which included many Jewish soldiers) victory over Spain in the Spanish-American War as revenge for the 1492 expulsion of Jews from Spain. As 26th president of the United States, “Teddy” Roosevelt again made it clear that he wasn’t going to let anyone be bullied around. He would not tolerate racism and discrimination, and indeed, Roosevelt was the first president to appoint a Jewish cabinet member – Secretary of Commerce and Labor Oscar Solomon Straus, who served from 1906 to 1909. He also intervened with the governments of Rumania and Russia on behalf of their Jewish populations and protected the Jews of North Africa from oppression and from unfair restrictions and fees. An unpopular notion at the time, TR stood out in his later years as an ardent Zionist. He had visited the Jews in Ottoman Palestine as a teenager in 1873 with his family, and Roosevelt wrote a diary of his trip, which included his observations of the Jews’ prayer at the Western Wall.Former Israeli Ambassador to the US and now Member of the Israeli Knesset Michael B. Oren wrote in his book “Islam and America: Building a Future Without Prejudice” that in 1918, shortly after the Balfour Declaration, which favored establishing a national home for the Jewish people in the Land of Israel, Roosevelt said that “‘It seems to me that it is entirely proper to start a Zionist state around Jerusalem,’ for peace would only happen if Jews were given Palestine.”On this day 97 years ago, January 6, 1919, Theodore Roosevelt passed away at the age of 60.To learn more about the establishment of the State of Israel as envisaged by the prophets of the Bible, as well as the Jewish roots of Jesus, check us out at @christian_jpost, on Facebook.com/jpostchristianworld/ and see the best of the Holy Land in The Jerusalem Post - Christian Edition monthly magazine.
Sign up for our Christian World newsletter >>