Today in History: The priest who saved 4,000 Jews

Pere Marie-Benoit made a commitment to do all that he could to protect refugees. 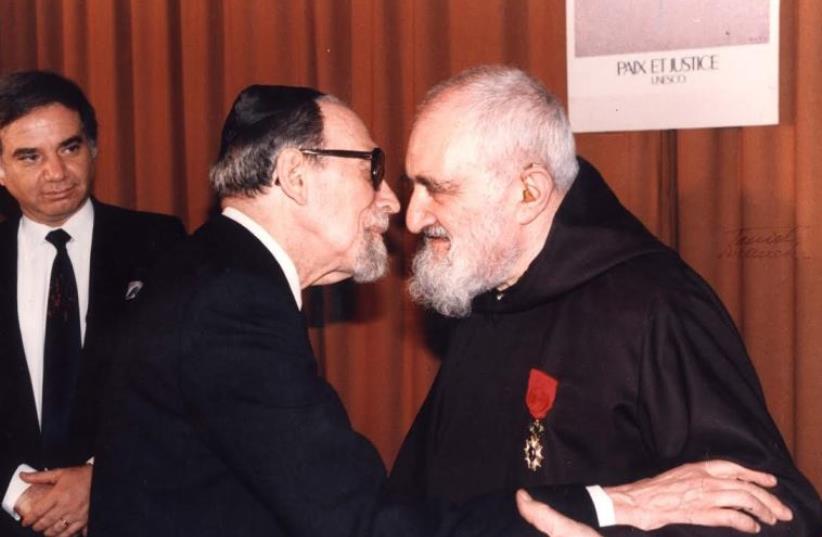 Father Benoit (right) with former French chief rabbi Jacob Kaplan in 1984
(photo credit: YAD VASHEM)
Advertisement
On March 30, 1895, priest Pierre-Marie Benoit was born in Bourg d'Iré, in western France. Born Pierre Peteul, the Capuchin Franciscan friar made a name for himself and his Creator, by saving more than 4,000 Jews during the Second World War.After serving in the French army as a stretcher-bearer during World War I, Benoit took up his religious role as a priest, moving to the Capuchin monastery in Rome.Benoit lived a simple and poor life in the Italian capital, but when the Second World War broke out Benoit returned home to France.In his home state, he experienced first-hand the hatred and discrimination that the Vichy regime - through its collaboration with the Nazis - was pouring into French society. During those years, Benoit made a personal commitment to do all that he could to protect Jewish refugees.Father Benoit used his contacts with other religious laymen to help smuggle out Jewish refugees to Spain or Switzerland. He did so by printing thousands of baptismal certificates, fake passports and other documents on the printing press in the monastery's basement to distribute to Jewish refugees in order to help them elude the authorities.After the Nazis and their allies occupied France's southern border in 1942, Benoit directed the Jewish refugees to be smuggled to the Italian occupation zone in southeastern France.Speaking to the Italian commissioner of Jewish affairs, Benoit persuaded Guido Lospinoso to bypass the 30,000 Jews in Nice and the surrounding area, and the Italian agreed to the holy man's request.The following year, in 1943, Benoit traveled to see Pope Pius XII to help implement an Italian-Jewish banker's plan to transfer 30,000 Italian Jews to North Africa by boat. The plan never came to fruition however, because the Germans took over northern Italy shortly after.Now a refugee in Italy himself, Benoit worked with the Jewish community and even became the acting president of the local Jewish welfare. There, he continued his mission to help the Jewish people, forging and obtaining false documents and obtaining extra rations cards by convincing the police were meant for non-Jewish refugees.Susan Zuccotti tells Benoit’s full story in the 280-page scholarly biography "Pere Marie-Benoit and Jewish Rescue." In the work, she brings testimonies that Father Benoit never attempted tried to convert the Jews who he was helping. One survivor said that Benoit had even encouraged her to "be a good Jewess," and another couple recalled that the friar had told them "You are Jewish and you must remain Jewish.”After Rome was liberated in 1944, the local Jewish community honored the priest in an official ceremony. In “Pageant” magazine in 1964, US President Lyndon B. Johnson mentioned the heroic and fabulous feats of Benoit in rescuing Jews from the Gestapo in Rome, saying he “should inspire us in the United States to protect and respect the civil rights of all people regardless of how they differ from us in race, color or creed.“He blazed a trail for all of us to follow in protecting the civil and human rights of our fellow citizens and in thus respecting their dignity as fellow human beings.”Yad Vashem honored Benoit on April 26,1966 as a Righteous Among the Nations. Zucotti writes that Benoit said of the tree planted in his honor in Jerusalem that “this tree does not only represent me, it also represents the courageous Jews with whom I fought and without whom I would not have achieved a great deal.”To learn more about Jewish-Christian relations, check us out at @christian_jpost, on Facebook.com/jpostchristianworld/ and see the best of the Holy Land in The Jerusalem Post - Christian Edition monthly magazine.sign up to our newsletter