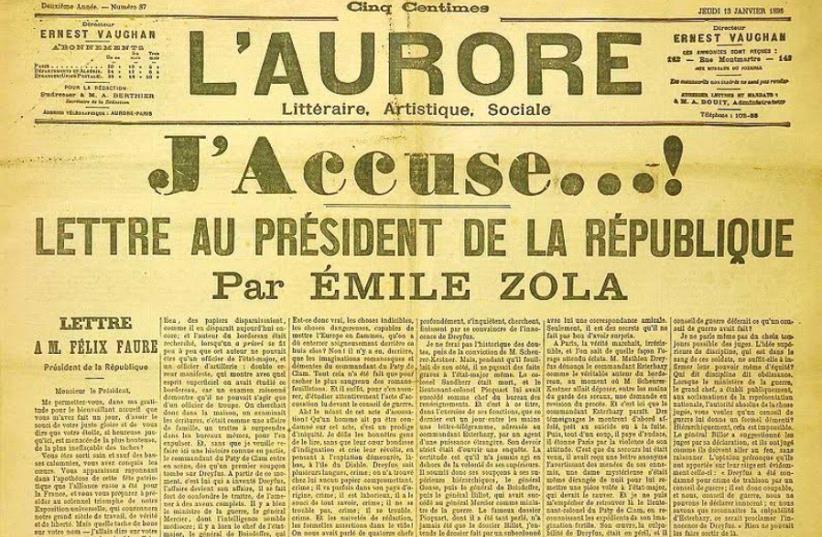 Zola's letter to the president
(photo credit: WIKIMEDIA)
Advertisement
In 1900, the famed author Emile Zola told a Zionist journalist visiting Paris that he desired to visit the Holy Land. The founder of the naturalist literature movement wanted to write two books on the backdrop of Jerusalem, one taking place in the time of Jesus, and the other to be a contemporary novel. Zola never made it, and yet the amount of streets in modern-day Israel named after him amount in the dozens.   This was because with one word that he wrote a couple years prior, Zola set off a powder keg of hope for the Jewish people that they would be accepted as a nation, and so too would their return to the Holy Land be accepted among the nations of the world.Following the famous Dreyfus Affair in 1894, in which Jewish French army officer Alfred Dreyfus was convicted of treason for giving away secret military intelligence to the Germans, Zionist visionary Theodor Herzl was convinced that the only option for the Jewish people to survive – and to thrive – was in their ancient homeland. Herzl and the Jewish people would get an enormous boost from Zola, who, when new facts came out that Dreyfus was wrongly convicted and the military wasn’t doing anything to right the wrongs, wrote "J’accuse." After writing his open letter to the president in the "L’Aurore" paper, which charged the army with obstruction of justice and blatant antisemitism, on February 7, 1898, Zola was brought to trial for libel. He subsequently escaped to England and was in exile until there was a new government in France and the charges against him were dropped. But he had made his name as a righteous gentile doing all that he could to help out the Jewish people."His conspicuous and distinguished role in the public defense of Dreyfus made his name a synonym for the righteous gentile in Jewish-national circles," wrote Mark H. Gelber in Melancholy Pride: Nation, Race, and Gender in the German Literature of Cultural Zionism."Owing to the importance of the Dreyfus trial in the story of Herzl's personal turn to Zionism, as well as the widespread interest in the case during the second Dreyfus trial, an inordinate amount of space was devoted to the trial and to Zola in cultural Zionist newspapers."Zola’s bold stand against antisemitism also bore fruit exactly 100 years after Zola’s "J’accuse." In January 1998, the French Roman Catholic daily "La Croix" apologized for its antisemitic editorials it wrote on Dreyfus.  The paper said it had gone against its Christian beliefs by criticizing Zola’s open letter and by slandering the French officer and the Jews in general, writing “Down with the Jews!" and calling Dreyfus "the enemy Jew.""Yes, we wrote that," the paper’s editorial said. "We must remember that. We must repent for that."To learn more about Jewish-Christian relations, and the building of the modern State of Israel as envisaged by the prophets of the Bible check us out at @christian_jpost, on Facebook.com/jpostchristianworld/ and see the best of the Holy Land in The Jerusalem Post - Christian Edition monthly magazine.sign up to our newsletter