A celebration of Jewish advocates

As recipients of the American Jewish Committee Campus Courage Award, two college students eschewed popularity for something far more substantive: standing up for their Jewish peers. 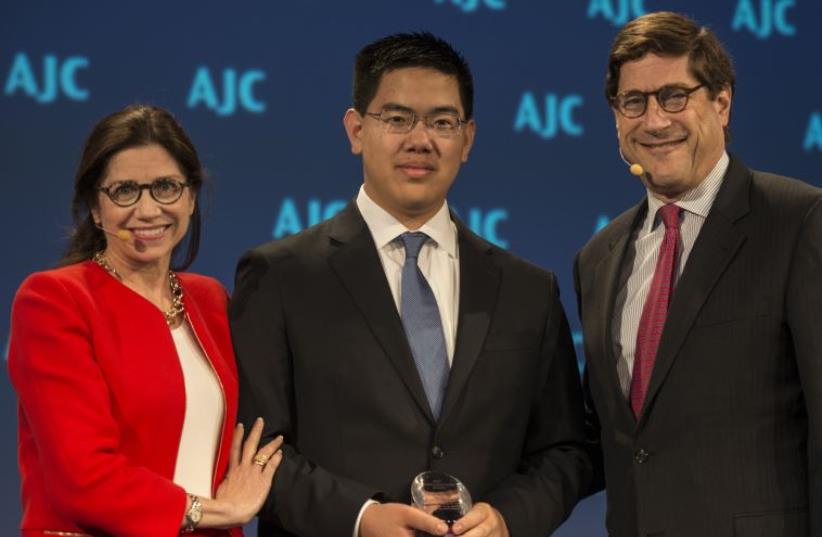 Speakers at an AJC event
(photo credit: AJC)
Advertisement
WASHINGTON – In college, a place where peer-pressure abounds and the pressure to fit in is palpable, students demonstrating courage in their convictions is a rare find.To that end, the American Jewish Committee’s selected two students who stood up for the Jewish community in the face of plenty of opposition.As recipients of AJC’s inaugural Campus Courage Awards, Winston Shi of Stanford University and Milan Chatterjee of UCLA were feted at the organization’s annual Global Forum on Monday.“Winston Shi and Milan Chatterjee are shining examples of what it means to speak out in campus environments that, in some cases, are increasingly hostile to Jewish students and anyone who challenges the BDS movement,” said Daniel Elbaum, AJC assistant executive director, who presented the awards.“They can’t win on the issues, right? No one will support divesting and sanctioning Israel, because Israel is a close ally. So what they do is defame, bully and harass people.It’s almost like a mafia effect,” Chatterjee explained in an interview with The Jerusalem Post, before accepting his award.As UCLA’s Graduate Student Association president, Chatterjee was the subject of a viscous smear campaign by Students for Justice in Palestine (SJP) after he stated that he would only fund a diversity event on the condition it had “zero engagement/endorsement policy toward divesting from Israel” or any related-BDS organization.“We said, ‘Look, we’d love to have the pro-Palestine and the Pro-Israel sides involved, but because we’re student government and represent all students, we can’t endorse either side,’” Chatterjee, justifying his reasoning for that decree, said.“Some Israeli students, when they go to these events, they think pro-BDS groups will gang up on them,” he added.A BDS presence at the diversity event, in his view, would have alienated Jewish students.As a result, SJP spent the majority of 2015 attempting to oust Chatterjee from his position.GSA later found Chatterjee guilty of violating the student body’s constitution, but voted not to take action against him.Chatterjee is not the first student to find himself in SJP’s crosshairs.Two years ago, UCLA’S Lauren Rogers had a similar experience after she had to defend herself in front of a student- run Judicial Board after participating in AJC’s Project Interchange. The AJC provided Rogers and Chatterjee with pro bono representation to help combat these attacks.“Almost every year, SJP attacks student leaders. Rogers is a good example... and the administration just sits silently and watches it,” Chaterjee said, accusing the UCLA administration of turning a blind eye to the harassment he experienced.Chaterjee, who is a rising third-year law student, said the AJC accolade is somewhat of a vindication against the many forces against him over the course of the year.“It does feel like a vindication to get this honor and to learn a great deal about Jewish history and Jewish politics and strategies to combat the BDS movement,” he said.Similarly, Stanford’s Winston Shi, unexpectedly found himself within the Jewish community fold when he penned a column in his school’s newspaper condemning anti-Semitic remarks by student senator Gabriel Knight.Shi slammed Knight for stating that Jewish “control” of the media, economy and government was valid ground for discussion.“It’s actually the oldest trick in the book to try start discrimination against Jews,” Shi asserted.“Nearly everybody encounters some sort of bigotry in their lives, and I’ve been lucky to have friends, many of them Jewish, who have tirelessly stuck up for me,” Shi explained in a statement.“I don’t know how I would have looked my Jewish friends in the eye if I hadn’t tried to defend them as well,” he said.Neither student won popularity points with their endeavors, especially among their own ethnic community.“I got a lot of flack from fellow Indian Americans because I think they sympathize with the Palestinian movement because they saw themselves as being part of an oppressed minority,” Chaterjee, who is an Indian American, said. “They feel that is my responsibility then, to advance their interest.”“As a minority, you feel almost peer-pressured to support BDS and the movement, even though it doesn’t advance their interest,” he added.This sentiment has gained traction as the idea of intersectionality – the theory that there are many forms of oppression and those oppressed groups should align themselves with each other – and has picked up steam on campus.It’s a theory that has placed minority students like Chaterjee and Shi (who is of Chinese descent) in a precarious situation.Shi, for his part, has dismissed the intersectionality theory.“I think the fact that I’m here shows that I don’t believe it,” he said. “At the same time there’s a lot of pressure to stay in that box once someone believes it, and it shapes your identity on a college campus.”Shi, who appeared humble on stage when he accepted his award, said that he “hope[s] that AJC will encourage other members of the silent majority to do the right thing. It’s a lot easier than people like to think.It turns out that we just have to take the first step,” he said.