80 years later: the conference that led to The Final Solution

The Wannsee Conference translated Hitler’s words into action in the most detailed, coherent and efficient manner possible.

By YOAV J. TENEMBAUM
A PORTRAIT of Reinhard Heydrich is displayed as part of the exhibition at The House of the Wannsee Conference in Berlin.
(photo credit: ARND WIEGMANN / REUTERS)
Advertisement

The Wannsee Conference of January 20, 1942, called to coordinate the German plan to undertake “The Final Solution to the Jewish Problem,” was a turning point in the history of Europe. It put the seal on the first coordinated, organized, industrial plan to eliminate completely an entire nation from the face of the earth.

To be sure, the Nazis and their collaborators throughout Europe had persecuted and killed Jews en masse prior to the Wannsee Conference. From 1933 onward, the Nazi Party, and the German state as a whole, had adopted measures, which increasingly limited the freedom of action of Jews, turning them into individuals bereft of any legal rights. Jews were persecuted, attacked and expelled.

What started in Germany was subsequently applied in Austria, following the Anschluss of March 1938; in the Sudetenland, in the aftermath of the Munich Agreement of September 1938, and extended to what remained of Czechoslovakia after the German occupation in March 1939.

When World War II started in September 1939, with the invasion of Poland by Germany, the Polish Jewish community, the largest in Europe, became immediately a target of German persecution. Around 3 million Jews were trapped under German rule, with scant possibility to leave. The Jews were turned into a ghettoized community, with the fortunate ones barely able to survive, and many starving to death or randomly killed.

Following the German invasion of the Soviet Union in June 1941, Jews were executed, en masse – women, men and children. The killing of thousands upon thousands of Jews by gunfire was taking a toll on German fighting forces in the Soviet Union. 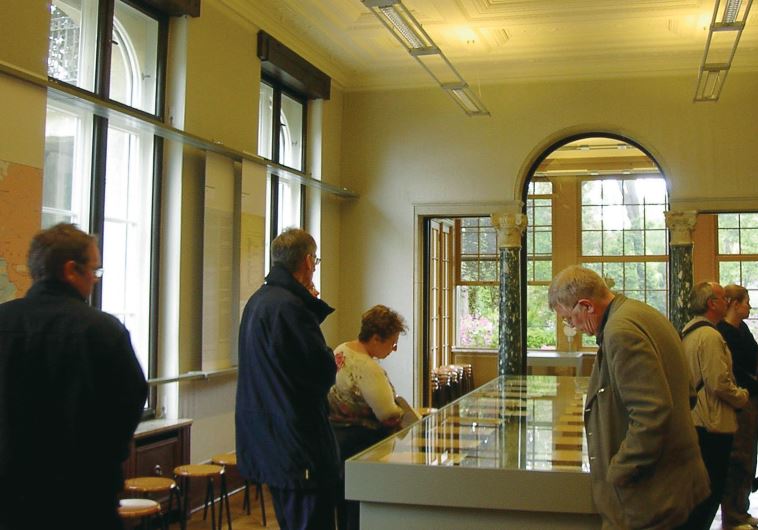 Visitors to the Wannsee House look at copies of the meeting’s minutes in the conference room. (credit: Wikimedia Commons)

The method was thought to be inefficient, as millions of Jews were to be murdered in the midst of a difficult war: too much time and too many Germans would be needed. Thus emerged the idea of “The Final Solution to the Jewish Problem.” A means was sought to eliminate the Jewish people, not by gunfire, but rather by gas; an industrial-like formula that would achieve the goal of killing every Jew in Europe quickly and efficiently.

Europe, which had witnessed 2,000 years of antisemitic persecution, reached a peak unequaled in the history of humankind. The Final Solution was put into effect by one of the most cultured nations the world had ever known. The Jewish people were to disappear from the face of the earth in a few years. Nothing would remain of the Jewish nation, no Jew would prevail, nothing but the ashes of the corpses gassed to death would survive.

This plan was as meticulous in preparation as it was to be in implementation. Six million Jews would perish during the Holocaust. Had it not been for the victory of the Allied armies, many more Jews would have perished, perhaps every Jew still alive under German rule.

THE ELIMINATION of the Jews of Europe was to be the corollary of a well thought-out plan, meticulously carried out, and enthusiastically embraced, rather than the by-product of the war. Jews were to disappear not as a result of a series of mass murders, but as an integral part of a coherent, industrial program. For the German leadership, the Final Solution was to be as important an objective as winning the war.

Many people in Europe collaborated with Nazi Germany in persecuting and murdering Jews. Indeed, some proved to be even more enthusiastic in their anti-Jewish fervor than the Nazis. Whether they were Ukrainians, Lithuanians, Poles, Latvians, Hungarians, Romanians, French, Dutch, or anyone else, they displayed a sense of sadism that on occasion surprised the Germans themselves.

Without Nazi Germany, the Holocaust would not have happened, but without their collaborators throughout Europe, it would have been more difficult to carry it out.

In the meeting at Wannsee, representatives of various government agencies participated, such as the Reich Chancellery, the Department of Justice, the Foreign Ministry, the Gestapo, the SS, and the Race and Resettlement Office. The meeting was headed by Reinhard Heydrich, who held various high-ranking official posts, and assisted by Adolf Eichmann, chief of Jewish affairs for the Reich Central Security Office.

The Wannsee Conference was a turning point, no doubt, but it would be nearly impossible to comprehend it but as part of a process. After all, it was convened in order to make the persecution and murder of Jews, which had been taking place until then, a much more efficient and significantly more rapid operation. It was both a continuation and a clear-cut new beginning.

Adolf Hitler made clear what his intentions were regarding the fate of the Jews in Europe back in January 1939. At a speech before the Reichstag (the German parliament, which by then was a mere institutional figurehead devoid of any powers), Hitler stated that “If the international Jewish financiers in and outside Europe should succeed in plunging the nations once more into a world war, then the result will not be the Bolshevization of the earth, and thus the victory of Jewry, but the annihilation of the Jewish race in Europe!”

The Wannsee Conference translated Hitler’s words into action in the most detailed, coherent and efficient manner possible.