Conflict in the Middle East, 1945-95 has been withdrawn by Hodder after UK Lawyers for Israel found a number of inaccuracies and biases within the text. 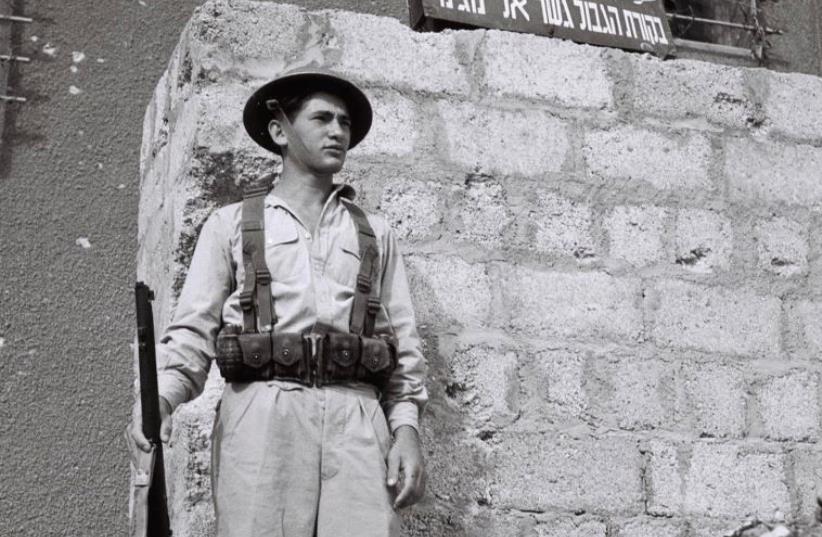 A JEWISH solider stands guard outside a building days after the British Mandate ended in 1948
(photo credit: REUTERS)
Advertisement
A British publisher has withdrawn a history textbook for GCSE students on the Arab-Israeli conflict, after a number of inaccuracies and biases were found within the first chapter alone. Conflict in the Middle East, 1945-95 is marketed by the publisher, Hodder, as covering "all three key topics" in the GCSE Edexcel syllabus: The birth of the state of Israel, 1945-63; The escalating conflict, 1964-73; Attempts at a solution, 1974-95."According to the marketing description on Amazon, the title was endorsed by exam board Edexcel for students taking its syllabus. However, a detailed analysis of the first chapter by UK Lawyers for Israel (UKLFI) has found a number of inaccuracies and a general lack of context within the book, leading overall to a lop-sided presentation of the Arab-Israeli conflict to British school children. The analysis's author, Noru Tsalic, argues that, indeed, the very title of the text is problematic. "The book focuses exclusively on the Arab-Israeli conflict, which was neither the only, nor – arguably – the main Middle East conflict," he wrote in his report. A better title, he suggested, would be: The Arab-Israeli conflict, 1945-1995.Similar inaccuracies include references to Arabs but not Jews as "Palestinians" when discussing the era of the British mandate, during which all residents, Arab and Jew alike, would have been understood to be "Palestinian," while the Kingdom of Judea is referred to as "Palestine" when the Romans had not yet named it such. Describing the results of Israel's War of Independence, the textbook states that Israel had gained "further land" from the conflict, but fails to mention that the Arab states of Egypt and Transjordan gained even more land. And it frequently refers to "terrorism" or "terrorists" when discussing Jewish actions, but not when discussing those carried out by Arabs. Tsalic notes in his report: "The judgmental term “terrorism” may be employed in the news industry, but it is misplaced in history lessons. Its meaning – still not clearly defined nowadays – changed through history. It is disputable whether attempts to assassinate the British High Commissioner (a senior figure in an oppressive colonial administration) constitutes an act of terrorism or of violent struggle for national liberation."He continues: "In addition, the term is employed selectively: it is not used to describe Arab violent acts against Jewish civilians, against British targets or against dissenting Arab individuals and organizations; it is, on the other hand, employed to describe violent acts committed by Jews."Hodder has confirmed to UKLFI that the book has been removed from sale, adding "we will reconsider its future." They noted that it may take some time for channels selling the book to reflect the change. Caroline Turner, UKLFI's director, welcomed Hodder's decision to pull the book, saying: “It is very important that children learning about this complex subject are taught in a balanced and accurate manner. We are pleased that another misleading and inaccurate school textbook, purporting to teach about Middle East history, is being withdrawn and reconsidered.”The withdrawal of the book follows similar withdrawals of the Pearson Edexcel GCSE and IGCSE textbooks following similar critique by UKFLI.