On This Day: Achille Lauro hijacking, resulting in Klinghoffer murder

The ordeal lasted two days and ended in one casualty — the murder of a 69-year-old wheelchair-bound Jewish-American man.

By SARA SHARF
Wheelchair with a photograph of the late Klinghoffer in it sits across from Lincoln Center and the New York Metropolitan Opera ahead of a planned demonstration, in New York
(photo credit: REUTERS)
Advertisement

On this day, October 7, in 1985, four heavily-armed members of the Palestinian Liberation Front (PLF) hijacked the Achille Lauro cruise ship off the coast of Egypt, that was traveling from Alexandria, Egypt to Ashdod, Israel.

The ordeal lasted two days with one casualty — a 69-year-old wheelchair-bound Jewish-American man, Leon Klinghoffer, who was shot and thrown overboard with his wheelchair by the hijackers.

The Italian ship was hijacked while sailing between Alexandria and Port Said. The four hijackers were under the direction of Mohammed "Abu" Abbas, part of one of three PLF factions, and one of eight Palestinian Liberation Organization (PLO) factions.

Over 600 passengers had disembarked the ship to visit the pyramids earlier in the day; less than 100 remained on the ship and those were taken hostage.

The demand from the hijackers was the release of 50 Palestinians imprisoned in Israel. If their demands were not met, the terrorists threatened to kill the American passengers on board, and later threatened to kill the British passengers. When Israel didn't respond to their demands, the ship sailed towards the port of Tartus in Syria, but the Syrian government refused to allow the ship to dock.

On October 8, the hijackers began to separate the hostages into groups, whether or not they were American or Jewish. The terrorists set a time to begin executions that day — 3:00 p.m.

The hijackers took wheelchair-bound Klinghoffer, who was Jewish and American, as the first hostage to kill. Youssef Majed Al-Molqi, the ringleader of the four, said that Klinghoffer was chosen because he was in a wheelchair to show they had no pity for anybody, AP reported in 1986.

Klinghoffer was shot in the head and the chest and two fellow passengers were forced at gunpoint to throw Klinghoffer's body and wheelchair overboard. 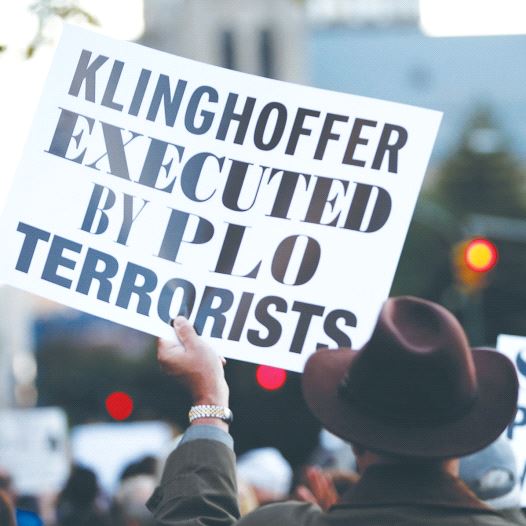 A PROTESTER holds up a sign condemning the Palestine Liberation Organization for the murder of Leon Klinghoffer (credit: REUTERS)

After two days, the hijackers agreed to dock the ship at Port Said, release the hostages, and surrender to Egyptian authorities — on the basis of receiving safe passage to Tunisia.

On October 10, they boarded an EgyptAir plane bound for Tunisia. The aircraft was refused entry at Tunis and Athens, and was ordered to divert to the Sigonella NATO base in Siciliy, Italy. A Navy SEAL team surrounded the aircraft to arrest the terrorists, but the Italian military claimed jurisdiction. After an armed standoff, they were eventually taken into Italian custody and tried in a local court.

The three adult men were convicted, receiving sentences ranging from 15 to 30 years in prison. The fourth hijacker, a juvenile, was tried and convicted in a separate court.

Mohammed Abbas of the PLF was also sentenced in absentia to five terms of life imprisonment for his role in the hijacking.