Piotr Cywinski turned the museum into a place “noticed by international experts." 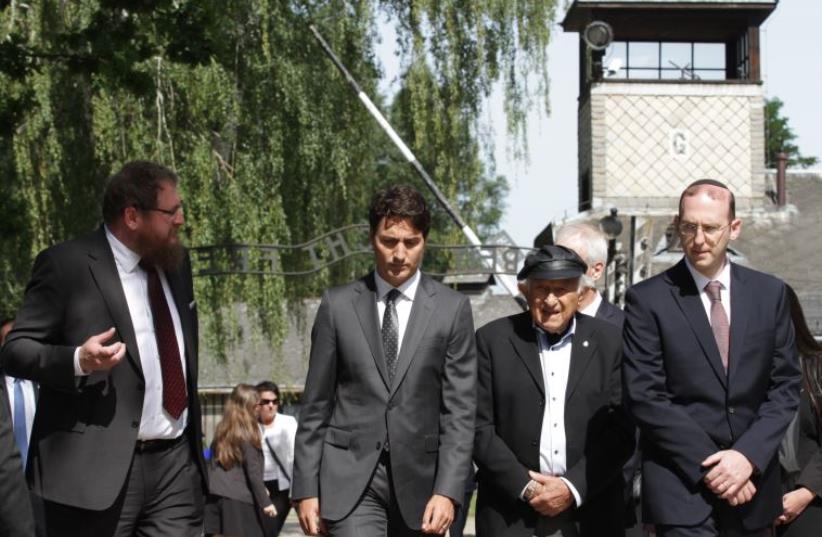 Canadian Prime Minister Justin Trudeau (2nd L) is accompanied by the director of the Auschwitz Museum Piotr Cywinski (L) and Holocaust survivor Nate Leipciger (2nd R) as he visits the site of the former German Nazi concentration camp
(photo credit: STANSILAW ROZPEDZIK/PAP/AFP)
Advertisement
The director of the Auschwitz Museum, Piotr Cywinski, was honored with the National Order of the Legion of Honor, the highest decoration awarded by the French state.Presenting the distinction at the French embassy in Warsaw on Thursday, the French ambassador to Poland, Pierre Levy, said that Cywinski is a humanist “whose voice counts in France.”“The last of the survivors are leaving us. Your mission becomes more and more difficult. As history slowly fades out, forgetfulness, ignorance, indifference or negation may prevail. Let us not let intellectual emptiness appear, in which evil is hidden,” he said.Levy also said that the French Republic fully identifies with Cywinski’s commitment to fight against racism, anti-Semitism, and xenophobia.In a letter read at the ceremony, Polish Deputy Minister of Culture and National Heritage Jaroslaw Sellin wrote that Cywinski has not only opened the possibility of visiting the Museum for two million people a year, he also created a place “noticed by international experts as a model, with the highest standards of care for memory, expressing the principles of authenticity, preserving the integrity of artifacts and archival collections.”The Auschwitz Museum was visited in 2018 by more than 69,000 French citizens. France is a partner in the Auschwitz-Birkenau Foundation, whose aim is to preserve the authenticity of the remains of the former camp. France has donated nearly $5.7 million to the effort.