Chief Rabbi of Brussels: There is no future for Jews in Europe 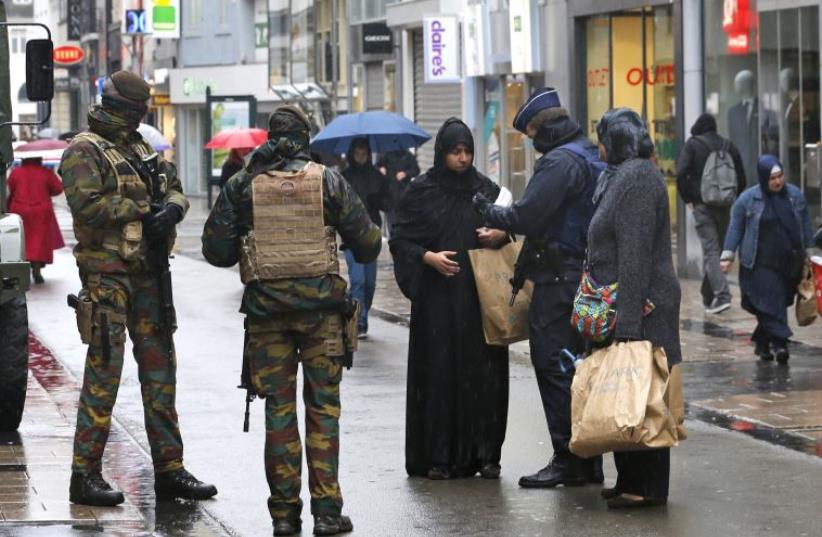 Belgian soldiers and a police officer control the documents of a woman in a shopping street in central Brussels, November 21, 2015
(photo credit: REUTERS)
Advertisement
In the shadow of the Paris terror attacks that killed 130 people and as Belgian police sweep the country for terror suspects, the Chief Rabbi of Brussels said Monday that there is no future for Jews in Europe.  Rabbi Avraham Gigi spoke to Israeli radio station 103 FM about the atmosphere of fear in the Belgian capital that has been in a state of near lockdown for the past three days. "There is a sense of fear in the streets, the Belgians understand that they too are targets of terror. Jews now pray in their homes [as opposed to at synagogues] and some of them are planning on emigrating," Gigi said. "Since Shabbat the city has been paralyzed. The synagogues were closed, something which has not happened since World War Two. People are praying alone or are holding small minyanim [small prayer groups] at private homes. Schools and theaters are closed as are most large stores and public events are not permitted. We live in fear and wait for instructions from the police or the government," he said. Gigi gave a breakdown of the Belgian Jewish population which he said numbered 50,000. "There are 25,000 Jews in Brussels, 18,000 in Antwerp and the rest live in smaller places. There has been aliya to Israel as well as emigration to Canada and the US. People understand there is no future for Jews in Europe," he said. He added that economic conditions are also pushing young people to leave Belgium and move to Israel or to other places.  "I think making aliya to Israel is an important thing for every Jew," Gigi said.  "It is something that Jews in every generation yearned for. But Jews should not make aliya out of fear because this will result in a poor absorption experience as a feeling that something was left behind will always remain. People should make aliya out of a love for Israel," the rabbi said.