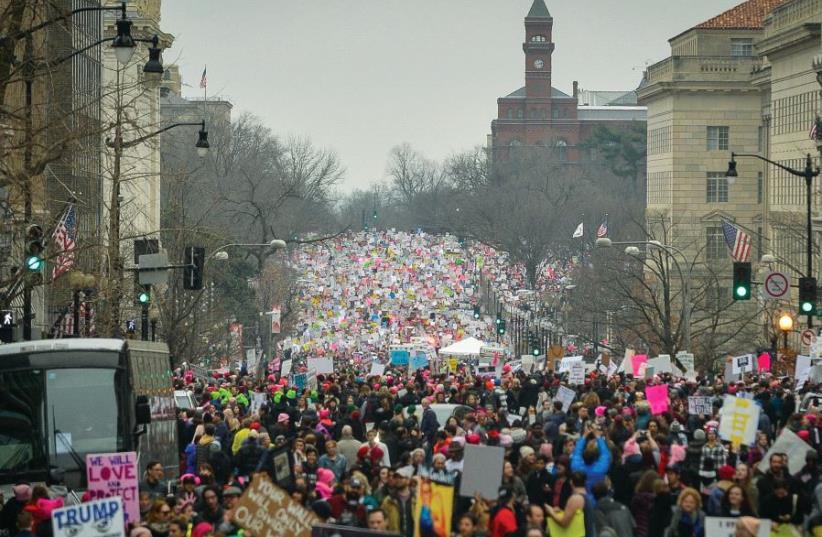 Hundreds of thousands of marchers fill the street during a Women’s March demonstration in Washington, DC, on January 21
(photo credit: REUTERS)
Advertisement
The organizers of a racial justice march in Washington scheduled for next month are seeking to bring people together “united in our demands for racial equity and justice.”But by scheduling the event for September 30, which this year falls on Yom Kippur, they’ve left many Jews who were eager to take part out in the cold.The March for Racial Justice is a grassroots effort by a number of organizers who say they are dismayed that “US laws, policies and practices remain steeped in racism and white supremacy.”But the date – the holiest day in the Jewish calendar – leaves many unable to take part, and they’re not happy.Writing on the event’s Facebook page, Joy Davidoff said that “by planning this March on Yom Kippur, many of us will be unable to attend. This also sows seeds of controversy at a time when we must unite. I beg the organizers to change the date.”Lisa Miller also chimed in, noting that “in Charlottesville Nazis were screaming out against Jews. To not even acknowledge this date is disgusting. They are alienating us.” Dozens more expressed similar sentiments.Jewish actress and prominent activist Mayim Bialik also commented on the timing, casting doubt on it being a simple oversight.“It automatically excludes a distinct portion of people who historically have stood up for racial equality in enormous ways,” she wrote.“And trust me: It’s on every calendar they checked before setting the date... super mad right now.” Organizers for the event did not respond to requests for comment by press time.In a post on Sunday, the organizers said they “regret the scheduling conflict” with Yom Kippur, but they dismissed the possibility of changing the date.The organizers chose September 30 since it is the anniversary of a race riot in Elaine, Arkansas, in 1919, in which at least 100 African-Americans were killed.The organizers noted that they consulted with Rabbi Hannah Spiro of the Hill Havurah in Washington.Spiro, they said, “stated that this march might be a powerful opportunity for Jews to pray with their feet in between services... [but] that many members of Jewish faith will prefer to spend the day in silent reflection, and that the fast may not allow for many to come out.”Spiro, in her own Facebook post, said she found the scheduling conflict “sadly disappointing.” She said she had “expressed my hope that the date would be changed,” adding that she herself will not be going, and “I will not be urging my community members to attend.”But Rafael Shimunov, a member of the board of directors of Jews for Racial and Economic Justice, urged people to have this discussion “with love.”“Assume good intentions,” he wrote. “Love is not being upset that some people don’t know Yom Kippur when some didn’t know about the largest lynching in US history. Same date. Love would be an equal or similar amount of Jews going to this planning meeting before we were offended.”