Holocaust survivors, who detailed their horrific experience at the trial which opened in February, have pleaded with Reinhold Hanning to break his silence. 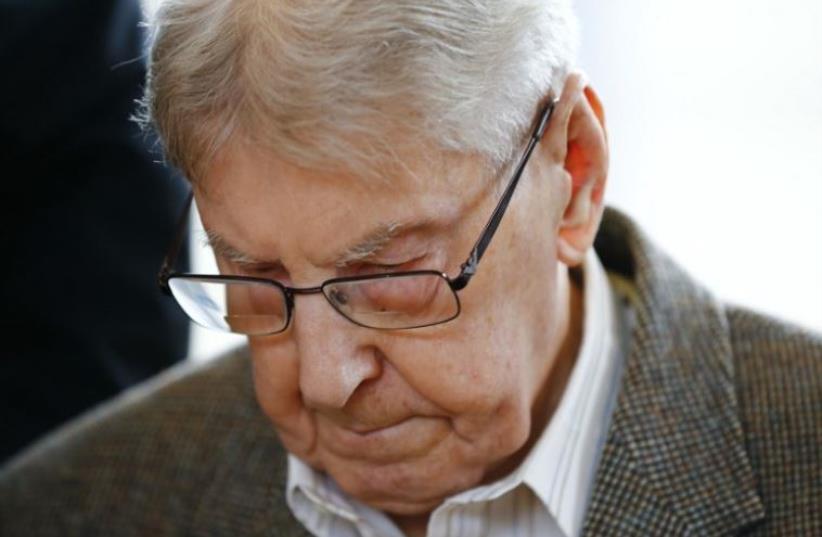 Former Auschwitz guard Reinhold Hanning arrives for his trial at the court in Detmold, western Germany
(photo credit: AFP PHOTO)
Advertisement
BERLIN- A 94-year-old former Auschwitz guard on trial in Germany over accusations that he was an accessory to the murder of at least 170,000 people is on Friday expected to have a statement read out by his lawyers in court.Holocaust survivors, who detailed their horrific experience at the trial which opened in February, have pleaded with Reinhold Hanning to break his silence.Hanning showed no emotion on the second day of his trial on Feb. 12 as three survivors spoke of the smell of burnt bodies and piles of corpses at Nazi Germany's Auschwitz death camp.He was heard only once in court in the western town of Detmold when asked how he was doing by judge Anke Grudda."Fine," he replied.Accused by the prosecutor's office in Dortmund as well as by 40 joint plaintiffs from Hungary, Israel, Canada, Britain, the United States and Germany, Hanning is said to have joined the SS forces voluntarily at the age of 18 in 1940.Although Hanning was not directly involved in any killings at the camp, prosecutors accuse him of facilitating the slaughter in his capacity as a guard at the camp where 1.2 million people, most of them Jews, were killed.More than a dozen people have testified in the trial and a verdict is expected on May 27.A precedent for such charges was set in 2011, when death camp guard Ivan Demjanjuk was convicted.Germany is holding what are likely to be its last trials linked to the Holocaust, in which more than six million people, mostly Jews, were killed by the Nazis.In addition to Hanning, one other man and one woman in their 90s are accused of being accessories to the murder of hundreds of thousands of people at Auschwitz in Nazi-occupied Poland.A third man who was a member of the Nazi SS guard team at Auschwitz died at the age of 93 this month, days before his trial was due to start.