Galloway's pledge comes amid election loss and claims that he illegally tweeted results of exit polls prior to polls closing. 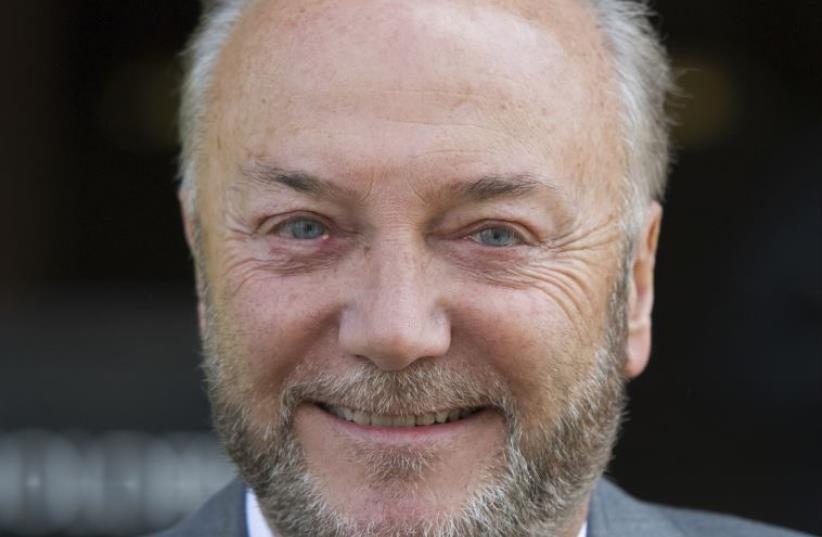 George Galloway‏
(photo credit: MIGUEL MEDINA / AFP)
Advertisement
LONDON – Controversial Respect Party leader George Galloway who lost his parliamentary seat in Bradford West in last month’s general election said he does not intend to try to ban Israelis from London if he wins next year’s mayoral elections in the capital.Questioned on BBC TV’s Sunday Politics, he was pressed on the issue by presenter Andrew Neil and made clear that while he was not planning to declare London an “Israeli free zone” it would certainly be his aim “to encourage the huge swell of pro Palestinian support in London.”“I think Palestine has more supporters in London than anywhere else in the country. But the mayor is not the pope and the mayor is not the president and is not the prime minister or the foreign secretary.”Challenged by Neil who pointedly stated that he did not hold any of those posts in Bradford, either, but had called for an Israel-free zone all the same, Galloway conceded he had but admitted that it was impossible to implement.“Of course, it’s unimplementable.It’s a moral position and my moral position on Palestine is well known to you and people watching this.”With time for the interview short, Neil did not go further and examine the potential absurdity of Galloway’s statement, but viewers were left in no doubt that should he succeed in securing the nomination and be elected in the May 2016 election, his support for the Palestinians would be a key part of his election manifesto and, while he may try to suggest otherwise, it would be part of his platform to appeal to London’s increasing Muslim vote.Meanwhile, police inquiries continue into allegations he sent messages on a social media platform during the hours before his election result was counted and declared. Galloway was reported to police for allegedly sending a tweet about exit polls before voting closed – which is banned under election law. His spokesman later called the allegation a “storm in a thimble.”Galloway, meanwhile, has launched a claim for the election to be rerun, alleging that Labor’s successful candidate Naseem Shah, who had a majority of 11,460, had been less than honest with the voters of Bradford West over her personal credentials and, in effect, misled them into believing reports of her marital status and at what age she had taken a husband.However, not only did he allege that Shah had made “false statements” during the campaign, liable to affect the result, he also claimed “widespread malpractice” involving postal voting, which he claimed meant the result must be “set aside.”A Labor spokesman said the action was “pathetic and without any foundation.”Galloway won the Bradford West seat in a by-election in 2012, but lost to Shah in a bitter campaign, dogged by claims and counterclaims between Labor and Respect over a number of issues – particularly relating to Shah’s family background.Labor, subsequently, counterclaimed accusing Galloway of breaching election law by making false statements during the campaign. Galloway’s spokesman later confirmed that their legal action was at an early stage.“A complaint had been made under section 106 of the Representation of the People Act 1983, which related to candidates making false statements during campaigns” the spokesman said, before adding in a further statement quoting Galloway, himself a former Labor MP, as saying it had come to his notice that there had been “widespread malpractice in this election, particularly over postal voting.”Galloway added: “We are in the process of compiling the information which will form part of our petition to have the result set aside.”But a Labor spokesman countered that George Galloway should accept he was booted out by the people of Bradford West. “They saw through his divisive politics and made a positive choice, by a majority of well over 11,000, to elect a brilliant new MP, Naz Shah.”The former MP also faces claims that he abused the use of parliamentary expenses while paying a personal assistant, allegedly asking her to undertake personal tasks outside the realm of duties specified by parliamentary authorities.He has claimed she had been sacked and was disgruntled, but following initial inquiries by Commons officials, it is understood the matter has been referred to the police for further investigation.