The image was published on Friday on the Twitter page of British neo-Nazi group National Action. 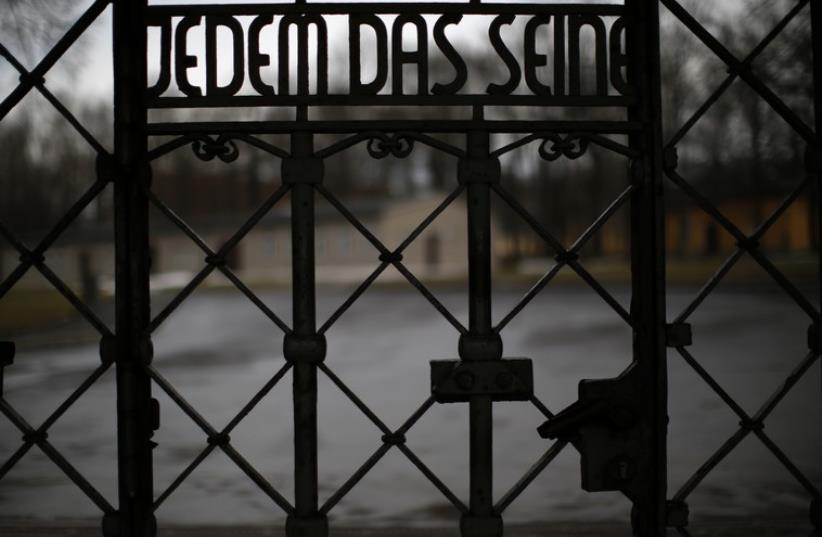 The camp gate with the inscription "to give each his due" is pictured at former concentration camp Buchenwald near Weimar
(photo credit: REUTERS)
Advertisement
BERLIN - German police have launched an investigation to identify two men believed to be Britons who appeared in an online picture performing a Nazi salute at the former Buchenwald concentration camp, Bild newspaper reported on Thursday.The image was published on Friday on the Twitter page of British neo-Nazi group National Action. It showed two men, whose faces had been blurred, holding a black flag displaying the group's lightning bolt logo and performing the salute.The picture appeared to have been doctored to add the captions "Execution Room @ Buchenwald 2016", and "Meat Hooks", with an arrow pointing to hooks on the ceiling used to hang victims strangled by the Nazi SS force.A police spokesperson in the eastern city of Weimar told Bild: "We take such actions very seriously."Police could not be reached for comment on Thursday, a holiday in several of Germany's 16 states.Buchenwald, near Weimar, was the biggest concentration camp on German soil. Set up by Hitler's SS in 1937, it held more than 250,000 Jews, Roma, gay and other people not tolerated by the Nazis. More than 56,000 people died there from torture, medical experiments and starvation.