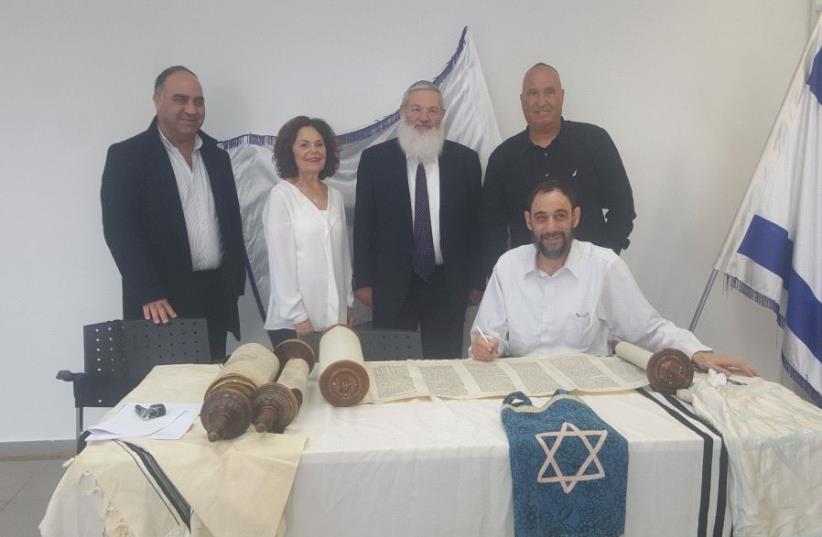 Torah scrolls given to Yad Labanim
(photo credit: RACHEL LANIADO)
Advertisement
A secret report compiled by expert researchers employed by the Russian government has revealed for the first time the existence of more than 100 Torah scrolls from the time of the Holocaust from central and eastern Europe which were taken by the Nazis.The Torah scrolls were stolen by the Russians at the end of WWII when they invaded Germany.A special unit of the Russian army took control of a train that was en route to store the Torah scrolls which had been plundered from Germany, Austria, Hungary, Poland and Romania. The Russian soldiers took the Torah scrolls and brought them to the city of Nizhny Novgorod, then known as Gorky, in order to store them in the national library in Nizhny, some 45 kilometers east of Moscow.Sibyl Silver first heard of the existence of the Torah scrolls at a dinner with members of the Jewish community in Prague in 2012 where she was visiting her granddaughter who was then studying in the city.When she went back home to Florida, she again heard the story of the Torah scrolls from members of the Jewish community and decided to investigate the subject. She traveled to Budapest, where she met with the Chief Rabbi Frolich, who had personally seen the Torah scrolls in the days when Hungary was still a Communist country.Sibyl began trying to get permission from Russian authorities and the experts they had hired to see the Torah scrolls.In 2015, she finally saw the Torah scrolls at the national library in Nizhny.Immediately after seeing and confirming that the scrolls existed, she wrote to Russian President Vladimir Putin and asked to bring them back to the Jewish community. Initially, he did not respond to her letter.After nearly a year-and-a-half she succeeded in gaining proof of the Torah scrolls existence and a copy of the report compiled by the experts working on behalf of the Russian government who were investigating them.Sibyl, the president of the Jewish Heritage Foundation, decided to donate 28 of the Torah scrolls to Yad Labanim, an organization that supports bereaved families in Israel. The scrolls from central and eastern Europe had been remarkably preserved over some 200 years and were able to go back into use for Jewish communities.Eli Ben-Shem, the chairman of Yad Labanim, said, "It is heart-warming to see the warm relations between Jewish communities around the world and the Jewish people in Israel. To see that there are Jews around the world who act to preserve the memory of the fallen and the legacy of the Jewish people and chose Yad Labanim as the organization that would receive the Torah scrolls that were preserved from the period of the Holocaust. They are helping to commemorate the fallen of Israel's battles and thus close a circle."He thanked Silver, who said: "It is a great honor to grant the scrolls which survived the Holocaust in order to help commemorate the bravery of the courageous soldiers who gave their lives for the country and for future generations."