When Hitler invaded Poland in 1939, Arthur was in the fourth grade, and his family moved to the Podgórze Ghetto in Krakow, Poland, where Arthur was Bar Mitzvahed. 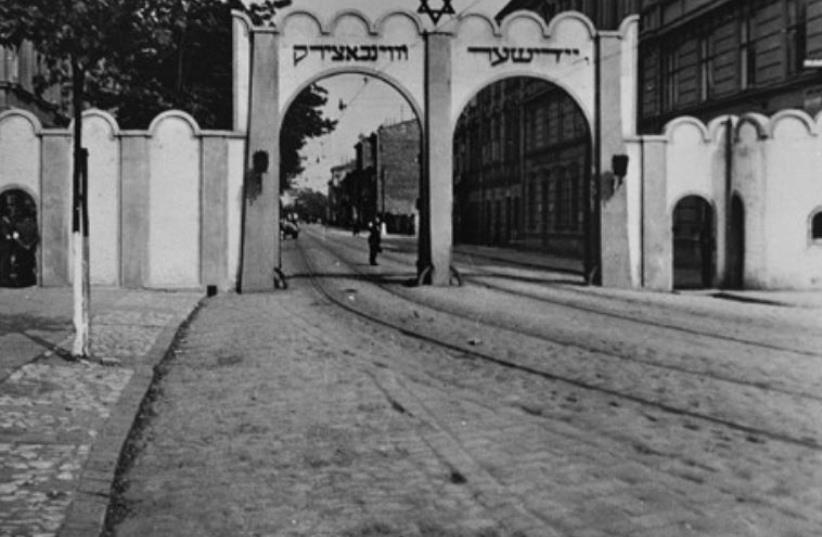 Arched entrance to Krakow Ghetto
(photo credit: Wikimedia Commons)
Advertisement
STATEN ISLAND, N.Y. (TNS) — “Nobody can imagine what we went through," Arthur Spielman said during his speech at the Wagner College Holocaust Center’s Rosh Hashanah celebration in 2017.“Now to see all of these people here – the students, the youngsters – thinking of us and remembering what happened, thank you to you all.”I remember this speech vividly, not only because I recorded it, but because it’s the first time I met Arthur. I was captivated by how emotional he was to see young people interested in the Holocaust.When Hitler invaded Poland in 1939, Arthur was in the fourth grade, and his family moved to the Podgórze Ghetto in Krakow, Poland, where Arthur was Bar Mitzvahed.Conditions in the ghetto worsened, and his family acquired Roman Catholic papers. They moved to Miskolc, Hungary, where they lived as non-Jews, befriended their neighbors who were Nazis, and survived the American bombings in 1944.“You cannot imagine what it looked like or felt like. We lived in a war-zone," Arthur said.Arthur was the first survivor I interviewed.When we sat down and started talking in September of last year, the memories filled his mind and he told the story as if it happened yesterday. The interview was two hours long and we spent an additional hour walking through his house looking at photos of his children, grandchildren, and great-grandchildren.During my second visit with Arthur, on April 30, he showed me copies of the Roman Catholic papers and photos from the 1930s and 40s.After hours of talking and looking through pictures, I noticed that the dinner table was set for three. He and his wife, Sydelle Spielman, insisted that I had to stay for dinner because she already cooked extra food for me.Since the dinner, we’ve grown to be friends who call each other almost every week, just to check in.Arthur said that Dr. Lori Weintrob, Director of the Wagner College Holocaust center, has been a huge influence on him because she encourages him to speak with students about his story. Before he met her, he said he never spoke at schools.In the past two years, Arthur spoke at Susan E. Wagner High School, Port Richmond High School, Lavelle Prep Charter School, P.S. 19, Jewish Foundation School of Staten Island, and Ben Porat Yosef in New Jersey. His latest speaking event was at a 3GNY Descendants of Holocaust Survivors brunch on Oct. 14.Arthur is also an active board member of the New Cracow Friendship Society.We invite you to watch the above video to hear Arthur’s incredible story of survival.
©2018 Staten Island Advance, N.Y. - www.silive.com - Distributed by Tribune Content Agency, LLC.