Aides to Obama cast doubts the president will use his final days to push a resolution. 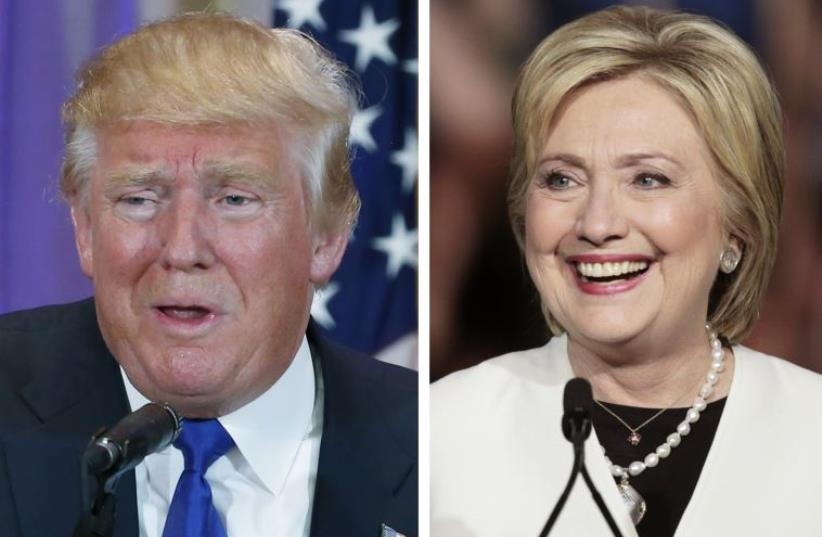 US presidential candidate Donald Trump (L) and Democratic US presidential candidate Hillary Clinton
(photo credit: REUTERS)
Advertisement
WASHINGTON – Senior government officials have reached out in recent weeks to advisers close to former US secretary of state Hillary Clinton and real estate tycoon Donald Trump to begin lobbying against the prospect that President Barack Obama will join an international peace effort in his final days in office, The Jerusalem Post has learned.Israel is concerned Obama will try to pass a UN Security Council resolution during what is known as the “lame duck ” period – the time between the election on November 8 and the next president’s inauguration on January 20. Obama would no longer need to consider whether his actions would complicate the electoral prospects of the Democratic candidate for president, who is likely to be Clinton.Clinton opposes international action on a two-state solution outside the framework of direct negotiations between Israel and the Palestinians.International initiatives would effectively impose parameters for peace “from without,” her campaign says.And multiple senior officials in the Obama administration believe the president is unlikely to undermine his successor by switching courses, should she win in November.Independent of her success, those officials told the Post that Obama is less supportive of a resolution on Middle East peace at the Security Council than he is opposed to an automatic veto for Israel at the council – in other words, nothing is guaranteed.The more likely path forward in the coming months would be a hallmark policy speech by Obama on the urgent need for peace in which he hints at Israel’s complicity in perpetuating the conflict, officials say. The speech could be paired with US engagement on the French initiative to convene international powers on the matter.But without explicit assurances from the administration that it will veto France’s proposed parameters resolution in the Security Council, Israel remains concerned Obama may ultimately choose to buck Clinton and launch an 11th-hour effort – a move that would further define his legacy in the Middle East.Israeli officials are therefore lobbying the Clinton camp to actively discourage such a move, capitalizing on decade-old relationships between Israeli government figures and some of Clinton’s closest foreign policy advisers.One scenario being tossed around in Jerusalem is that Obama will allow the French to continue with their current peace initiative , but then commandeer control of it after November and pass his own UN resolution in its place.By reaching out to associates of the two presumptive main party candidates for president, Israel is hoping whoever wins in November will be able to restrain Obama from taking such diplomatic action.Clinton’s opposition, in particular, poses significant stumbling blocks for any camp within the Obama administration that would like to see Washington support Paris’s effort. But a Trump victory would also offer Israel some leverage, Jerusalem calculates, given his penchant for threat-making and disparagement of international bodies.While France’s draft resolution would not create facts on the ground, it could still have significant diplomatic consequences for Israel. Depending on the type of resolution passed, the Security Council could get the authority to impose sanctions on either side for not meeting their obligations under the resolution.“This scenario is keeping a lot of people up at night,” one senior Israeli official said.