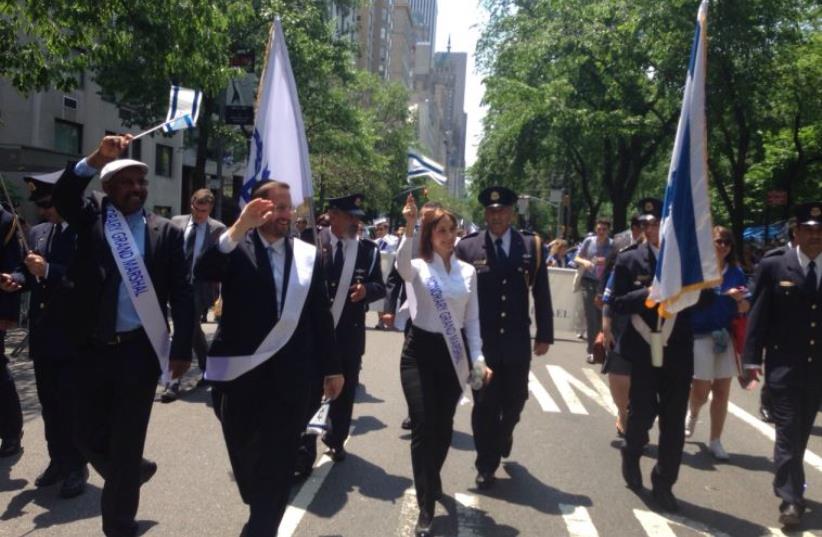 Members of Knesset march in the Celebrate Israel parade in New York
(photo credit: TALI BLANKFELD)
Advertisement
Five MKs from the coalition and opposition marched in the Celebrate Israel Parade in New York Sunday.Along with representatives of pro-Israel organizations from across the US, MKs Avraham Naguise (Likud), Yoav Ben-Tzur (Shas), Revital Swid (Zionist Union), Ksenia Svetlova (Zionist Union) and Minister Without Portfolio Ofir Akunis marched up Manhattan's Fifth Avenue in the 51st annual parade.Akunis led the parade together with New York Mayor Bill deBlasio."Israel and the US share values," Akunis said. "The past and the future of the two countries are intertwined. Israel owes a great debt to the US and its citizens who stood and stand with us even when we disagree.""It's exciting to march with many thousands who stand with us, while others incite against us," Naguise said.Ben-Tzur said he was thrilled to see how many people showed support for Israel in the parade."The Big Apple is blue and white," Svetlova remarked. "The feeling in New York is that there is a great friendship and a true partnership."Swid said her participation is part of the fight against delegitimization of Israel, which crosses party lines, and that she is very proud to represent the Knesset.The MKs arrived in New York three days ago and met with the Consul to New York Ido Aharoni, as well as heads of Jewish organizations, New York City Council members and others.Jewish students from Columbia University said that the atmosphere on their campus and others is pro-Palestinians and they face difficulties as supporters of Israel.