Cabarrus County Rep. Larry Pittman made the comments during a debate over sam-sex marriage on Facebook Wednesday. 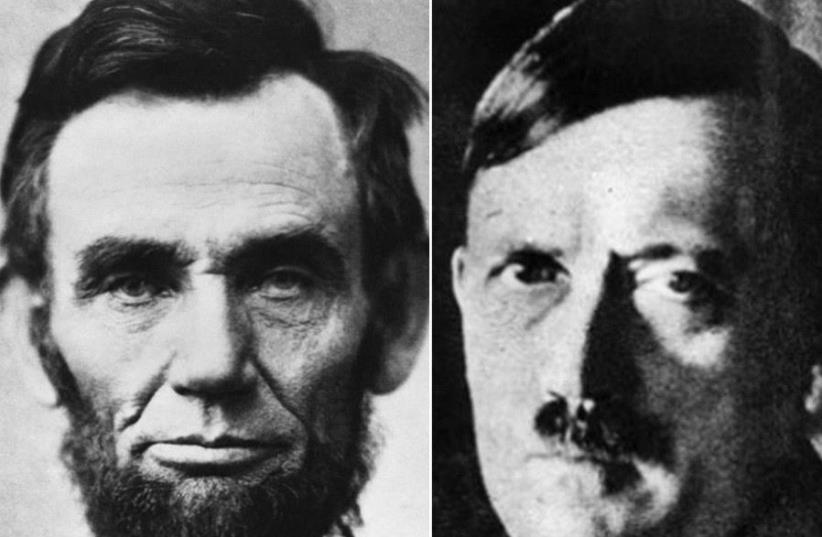 Abe Lincoln, Adolf Hitler
(photo credit: ALEXANDER GARDNER,REUTERS)
Advertisement
A North Carolina lawmaker found himself embroiled in controversy Wednesday after comparing former US president Abraham Lincoln with Adolf Hitler, according to The Washington Examiner.While debating the merits of a new same-sex marriage bill introduced in the state's General Assembly over Facebook, one commentator told Cabarrus County Rep. Larry Pittman "to get over" the issue," adding that "the Civil War is over. The [US federal government] won."In response, Pittman wrote: "And if Hitler had won, should the world just get over it? Lincoln was the same sort of tyrant, and personally responsible for the deaths of 800,000 Americans in a war that was unnecessary and unconstitutional."Pittman's public comments drew almost immediate condemnation, prompting North Carolina Democratic Party chairman Wayne Goodwin to questions his colleague's judgment.

In a week tremendous #PRfails, allow the #NCGA's own Larry Pittman to overshadow them all. Gay marriage, Hitler and Lincoln. Perfection. pic.twitter.com/5Oh1nU8jVm
— Kevin Rogers (@kevinjohnrogers) April 12, 2017


"Representative Pittman and his ultra-conservative allies in the General Assembly have no sense of decency, no sense of shame and no sense of historical fact," Goodwin said in a statement.The Examiner also noted that most historians put the American death toll between 620,000 to 750,000.It was not the first time this week an American official referenced the Nazi leader. Speaking with reporters one week after a chemical attack killed 87 civilians and injured over 550 in Syria's Idlib province, White House Press Secretary Sean Spicer Spicer said that even Hitler didn't "sink to using chemical weapons" in World War II, unlike Syrian President Bashar Assad.He later apologized for the statement.
Advertisement
Subscribe for our daily newsletter