As the French presidential elections kick off, French expats in New York vote and share their insights on a politically-divided France in a tension-fraught European Union. 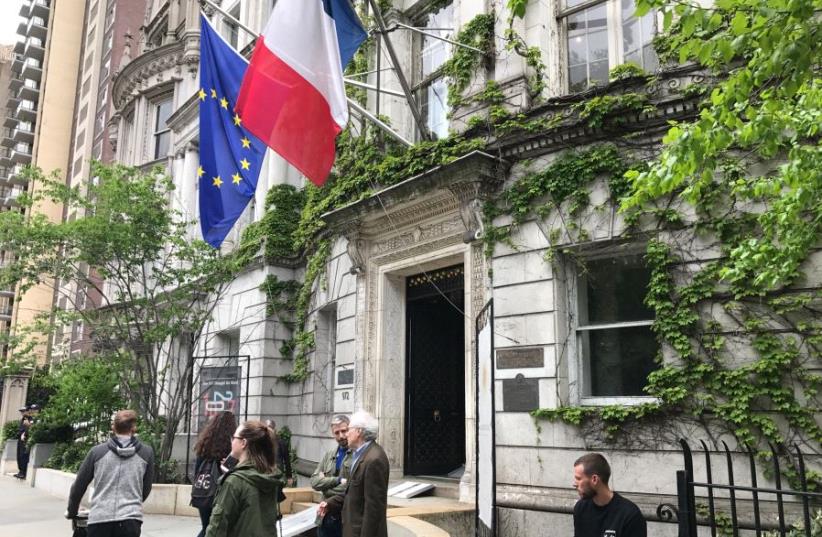 People in front of the French consulate in New York, preparing to vote.
(photo credit: ARNAUD SEBBANE)
Advertisement
NEW YORK – Sunday’s French election was the second one that Audrey and Arnaud Sebbane, who moved to New York City with their three children six years ago, have participated in by absentee ballot.Like some 30,000 other French citizens living in the Big Apple, they cast their votes on Saturday, a day before polls opened in France, for what is going to be a critical election.“It’s a no-brainer,” 43-year-old Audrey Sebbane told The Jerusalem Post. “There is no choice when it’s one between dangerous extremism and someone who is more moderate. It’s not even a question.”Audrey and her husband both voted for former banker and political outsider Emmanuel Macron. For them, this year’s election was more about blocking far-right candidate Marine Le Pen than it was making a real choice.“Le Pen is dangerous,” she said. “She is dangerous for the country, she is dangerous for foreign relations and she is a very smooth manipulator. We cannot let something this terrible happen before our eyes.”Her husband, Arnaud, added: “People don’t even feel ashamed of having extreme views anymore, it has become normal, and it is absolutely not. So we have to vote and express our opposition.If we don’t do it, even if we vote ‘none of the above,’ it’s like we don’t have an opinion. And when you don’t have an opinion you are helping the extremes.”The couple said that voting from abroad feels very different than voting in France. Being away, they said, leads them to have different concerns than their fellow citizens in the homeland.
French citizens in Israel vote in France presidential election (credit: REUTERS)
“The fact that we are outside of France means we are not necessarily gonna vote on domestic issues as much,” Arnaud Sebbane said. “We are more closely looking at what is France’s image and power in the world, its representation.I see France in a more global context.”Audrey Sebbane said that while she feels that the election still very much affects her, she also looks at it from an outsider’s perspective.“We don’t feel the same pressure that we used to in France about the elections, when you are constantly immersed in media and the general environment,” she said. “So we don’t feel it as much every day, but we have a duty to vote, as French people.”For Delphine Darmon, who has been a New Yorker for the past four years and works in beverage distribution, her first time following a presidential campaign from afar was as intense as her experience back in France.“We read Le Monde and Le Figaro all the time, we are on WhatsApp groups with friends back home who talk about it all the time, so we feel just as concerned,” she said.Darmon, who voted for Macron in the first and second rounds of the election, said she was worried during the first vote, especially after having lived through the 2016 US presidential election, which caused surprise by results that defied almost all media predictions.“It made us aware that anything can happen,” she said.“But now, in the second round I’m not worried: it’s not the same electoral system as in the US, we don’t have an electoral college, and the polls are pretty reliable.”The election of US President Donald Trump last November and Britain’s vote to leave the European Union before that has caused some French citizens to worry about a potential world trend toward extremes.“Having experienced the election in the US and the extreme views expressed that night, my worry is that people are no longer ashamed of saying things that shouldn’t be said,” Arnaud Sebbane said. “Today, people are no longer ashamed to say they are voting for Le Pen, even in front of cameras, whereas a few years ago when the far Right started rising, people didn’t feel comfortable saying it.”Delphine Darmon added that she was particularly struck by the lack of protests against Le Pen between the two rounds of voting in the election.“In 2002 [after Jean-Marie Le Pen made it to the second round], we had two weeks of protests,” she pointed out. “Today, there is a complete lack of reaction.”More than 100,000 French citizens were registered to vote from abroad in the 2017 election.