NY Jews express their frustration and disagreement with UN Resolution 2334 that calls to halt settlement construction on Palestinian-owned lands. 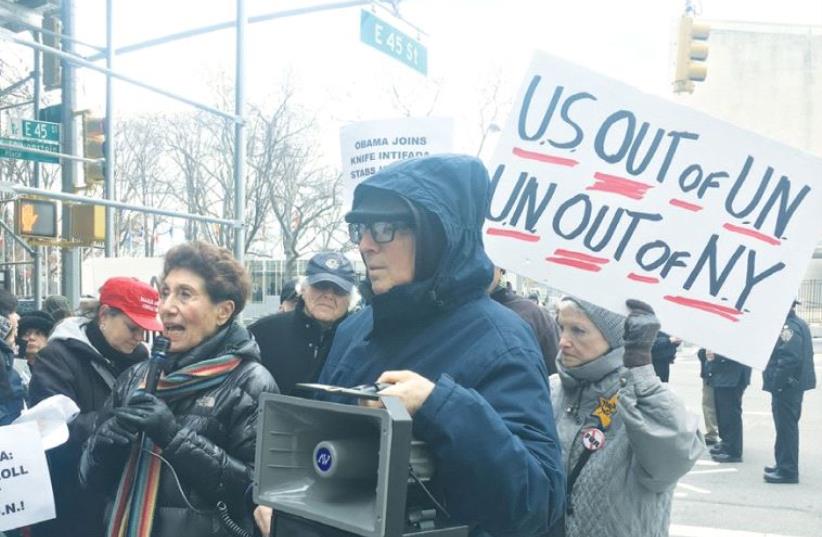 NY protestors demonstrate against UN resolution 2334
(photo credit: DANIELLE ZIRI)
Advertisement
NEW YORK – Dozens of Jews gathered in front of the United Nations headquarters on Wednesday to protest the UN Security Council resolution condemning Israeli settlements that was passed last week and to demand that the United States stop funding the international body.The resolution has caused a turmoil in US-Israeli relations since Friday. It describes Israeli settlement activity as illegal, and demands that Israel “immediately and completely cease all settlement activities in the ‘occupied’ Palestinian territory, including east Jerusalem.”Fourteen of the 15 council members voted in favor of the resolution, none voted against the initiative and the US abstained instead of vetoing it.
Netanyahu: "Friends don"t take friends to the Security Council" (Dec. 26, 2016)
Protesters held Israeli and American flags as well as signs reading “US out of UN and UN out of NY.”Some also displayed posters saying “Good Riddance to Hussein Obama,” to address what many in the crowd called “a betrayal” from the US toward Israel.“I’m here today to show my disapproval of President Obama and the UN and John Kerry, for their demonization of Israel and for being very one-sided,” Ariel Kohane told The Jerusalem Post, as he held a sign reading, “President Obama: Don’t bankroll morally corrupt UN!” “This is a veiled form of antisemitism,” he said. “Now Obama and Kerry are showing their true colors, now that they are lame ducks and are not running for reelection. They are showing how they felt about Jews and Israel all along for these past eight years.”Kohane said he hoped the US will “either completely defund the UN, or at least parts.”Like many at the gathering, Kohane presented himself as a proud supporter of President- elect Donald Trump.“Trump has already said, among other things, that the way he will deal with the UN will be completely different,” he said. “[The Trump administration] will not tolerate any nonsense about Israel.”Among the protesters, a New York area-based lawyer named William – who pointed out he is not a Republican and did not vote for Donald Trump – said he is “beyond disappointed” by the Obama administration.“I am infuriated, and there is nothing that I can do because this President is beyond accountability. He waited until there was nothing that could be done, It was cowardly,” he said.“People like me are not professional protesters, we are very uncomfortable protesters,” William added. “It is not natural for me to be here, but since there are people who are courageous enough to do it I feel like I should show up too, rather than just complain to my spouse and not do anything.”He also said he believes “there needs to be a conversation among socially liberal Jews about what it means to still be Jewish. For those of us who didn’t vote for Trump, we have to ask ourselves, ‘Is our identity that of people who hate Trump more than we care about Israel?’ If that’s who we are, that’s a problem.” he said. “I don’t see how anybody who cares about Israel, who cares about their fellow Jews can countenance [the resolution], even if we feel as though the settlement enterprise has been in some ways mistaken.”Wednesday’s protest took place as Secretary of State John Kerry gave his speech at the Department of State, laying down his vision for peace between Israelis and Palestinians and justifying the administration’s choice to abstain from voting on the anti-settlement resolution passed by the UN's Security Council.