The close to 130-year-old eatery has launched a new campaign this month called “Pass the Pastrami.” 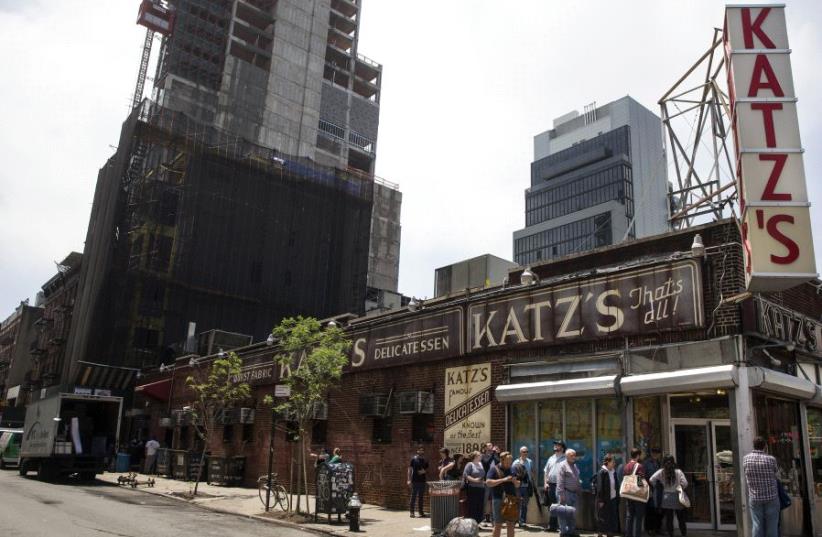 People stand in line at Katz's Delicatessen, the famous deli founded in 1888, in New York's lower East Side
(photo credit: REUTERS)
Advertisement
The owners of Katz’s Delicatessen seem to be clamoring to share their famous pastrami with as many people as possible.The close to 130-year-old eatery has launched a new campaign this month called “Pass the Pastrami,” where it challenged restaurants around the country to incorporate pastrami into menu dishes.The campaign began earlier this month in Boston, where the brined, smoked iconically Jewish meat hit the menu in Little Donkey. Chef Jamie Bissonnette created a pastrami “sopes” – which is a traditional Mexican street food consisting of a filled corn dough. The version at Little Donkey included pastrami alongside salsa, cheese and pumpkin seeds.From there the pastrami train chugged into Miami, where Harry’s Pizzeria offered up – you guessed it – a pastrami pizza. The chain’s three Miami locations served a limited-edition pastrami pizza made with a rye crust, sauerkraut and Gruyère cheese (and had to order more pastrami when they ran out the first time).

Who has the pastrami? I do! From July 10-16, order my Katz's Pastrami Pizza @harryspizzeria in Coconut Grove made with @katzsdeli signature pastrami #passthepastrami #hpcoconutgrove
A post shared by Michael Schwartz (@chefmschwartz) on Jun 16, 2017 at 10:14am PDT

Then things moved to Philadelphia, and the Amis Trattoria, where diners could order a pasta and pastrami dish. The restaurant’s chef paired tonnarelli pasta with pastrami, egg, olive oil, pecorino cheese and black pepper.“We sell 15,000 pounds of pastrami every week, making it our most popular meat at the moment,” said Katz’s Deli owner Jake Dell in a press release. “I can’t wait to see what these insanely talented chefs are going to come up with. It’s a fun way for people in different cities to get a taste of what we do here at Katz’s, and to learn some cool new recipes that they can recreate at home through our shipping department.”A representative for Katz’s Deli told The Jerusalem Post that more pastrami collaborations were on the horizon this summer, but the next set of locations has not yet been scheduled.

The hype is REAL‼️ @katzsdeli is coming to Little Donkey next weekend for brunch from 10am-3pm. We're serving up Katz's pastrami sopes with habanero salsa, cotija, and pepitas #passthepastrami #makethoseressies
A post shared by Little Donkey (@littledonkeyboston) on Jul 1, 2017 at 6:03am PDT

In May, the deli announced that it would soon be launching international delivery of its iconic Jewish deli products. While it has not yet begun, the plan is to start with Mexico and Canada before branching out to other countries. The restaurant has been shipping its products – not the whole menu, but latkes, pastrami, corned beef, knishes, babka, pickles and more – domestically since the 1990s.The deli was opened on Manhattan’s Lower East Side in 1888 by a pair of Jewish brothers named Iceland. It then changed hands to the Katz family, and then the Dell family, who kept the name. And while it serves all the Ashkenazi classics – from pastrami to latkes, blintzes, matza ball soup and chopped liver – it is neither kosher nor kosher-style.After 129 years on the Lower East Side, Katz’s opened its first-ever outpost last month, in Brooklyn’s DeKalb Market Hall.It looks like Katz’s will stop at nothing to conquer the globe with cured beef.
Advertisement
Subscribe for our daily newsletter