Public figures, Holocaust survivors, and people from all over the world have pledged to turn on their lights on the night of November 9, as a symbol of hope.

By INTERNATIONAL MARCH OF THE LIVING
(photo credit: MARCH OF THE LIVING)
Advertisement
Public figures, Holocaust survivors, and people from all over the world have pledged to turn on their lights on the night of November 9, as a symbol of hope. They have also written messages marking the anniversary of Kristallnacht on November 9 and honoring its victims as part of the International March of The Living "Let There Be Light" campaign. This global interfaith initiative has been initiated by International March of the Living, in collaboration with the Jewish Community of Frankfurt and the Miller Center at Rutgers University in the United States.SHINE LIGHT! Design a free and meaningful plaque >>

So far, people from 40 countries, including dozens of institutions and houses of worship, have written their messages at   motl.org/let-there-be-light which will be projected on the walls of the Old City of Jerusalem on November 9.

Mayor of Jerusalem, Moshe Lion: “Each shard of glass that filled the air in Germany on Kristallnacht, exactly 82 years ago, forewarned of the dark days that would follow, during World War II.  Then, the world refused to see the dark winds blowing across the German nation. Today, we are here, reminding the world of those same fragments of shattered glass, to ensure that the world knows how to recognize when countries openly call for the extermination of Jews - and to stop them in time.”

Chairman of the Jewish Agency, Isaac Herzog: “Groups of rioters looted one Jewish property after another and synagogues were burned to the ground. Unfortunately, the lesson of Kristallnacht has not been learned. The Jewish Agency is investing strongly in the security of Jewish communities, but the struggle against anti-Semitism is not just a Jewish struggle. It is the struggle of all mankind.” 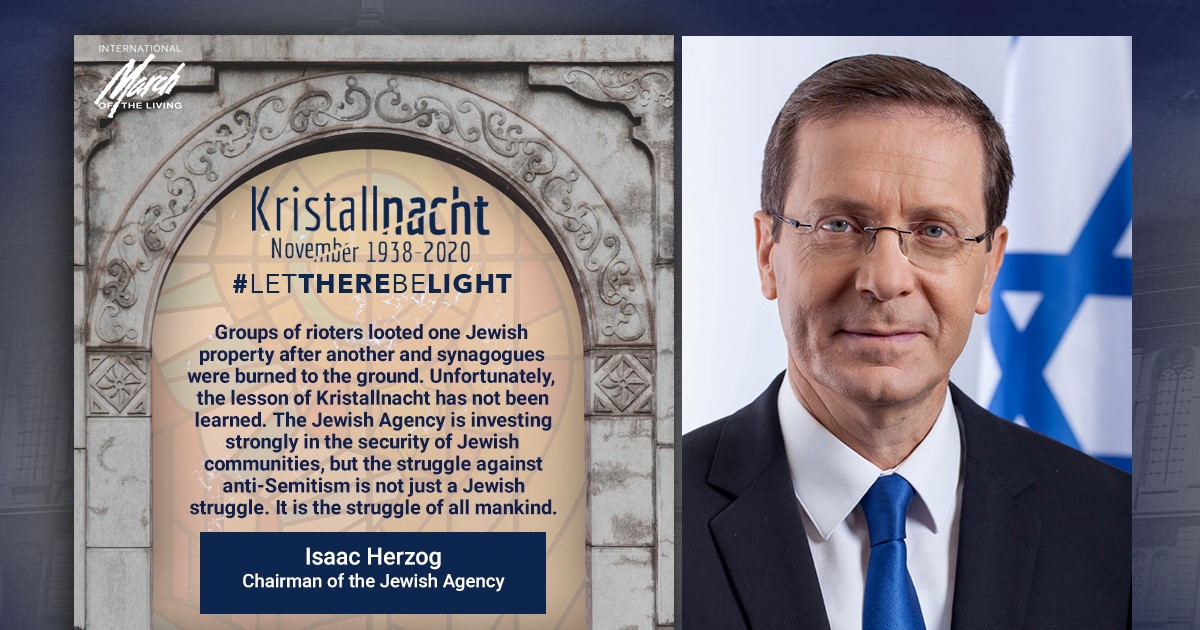 President of the Jewish Community in Frankfurt Prof. Dr. Solomon Korn: “Anti-Semitism and racism threaten our society as a whole, they endanger our values and democracy. Together we want to send a signal against the increase in anti-Semitism and hate speech worldwide. We want to advocate that discrimination and intolerance are outlawed in our society.”On the night of November 9, as part of the "Let There Be Light" global campaign, the Frankfurt Central Synagogue, one of the few in Germany not to be destroyed on Kristallnacht, will be illuminated.Chemi Peres, Chairman of Peres Center for Peace & Innovation: “We must keep the memory alive. Facing the passage of time, we must never stop the march of the living. Its very existence is what enables our future. The night of broken glass, the victims – must never be forgotten. Solidarity is at stake, for all men and women, to continue to heal the world.” 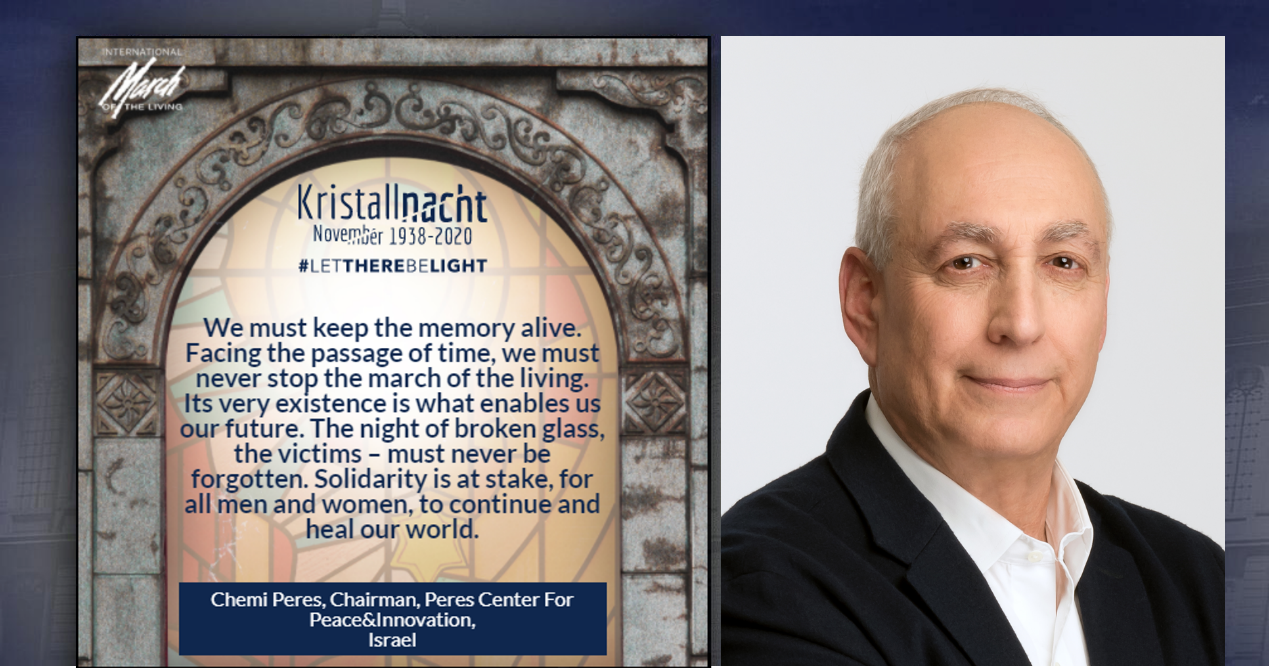 Gidi Mark, CEO Taglit - Birthright Israel: "The sacred commitment to remember our Jewish brothers and sisters who perished in the Holocaust closely and morally intertwines with our lives today as Jews on earth. Their memory, in the present and the future, is what motivates us to continue to work for the fulfillment of Jewish values and beliefs. We shall continue marching tirelessly together, as a people, thereby sanctifying both their lives and ours." 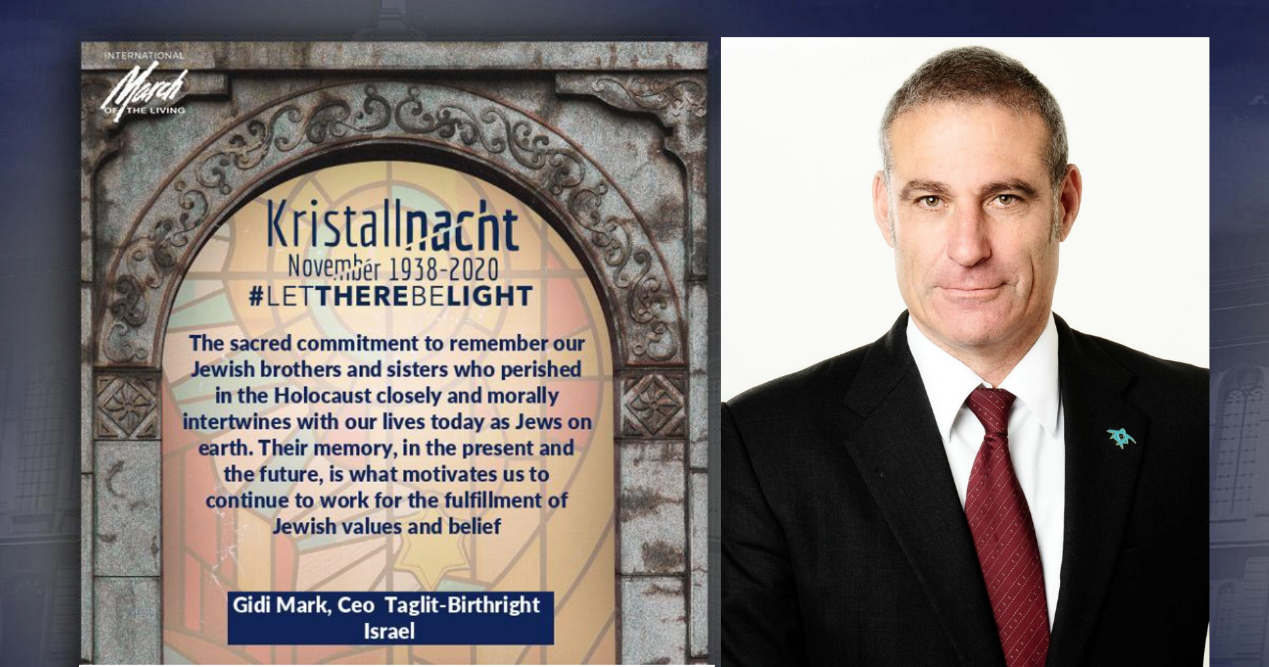 "11 years following Kristallnacht, Givat Haviva was established by Hashomer Hatzair kibbutz communities, in order to perform as a bridge between diverse cultures and nationalities. Today, 82 years have passed and the lesson is yet to be learned. We witness growing racism and antisemitism, fanning the flames of hate and corrupting humanity. We will continue to strive for equality and cooperation between men and women, regardless of their race, beliefs or gender." 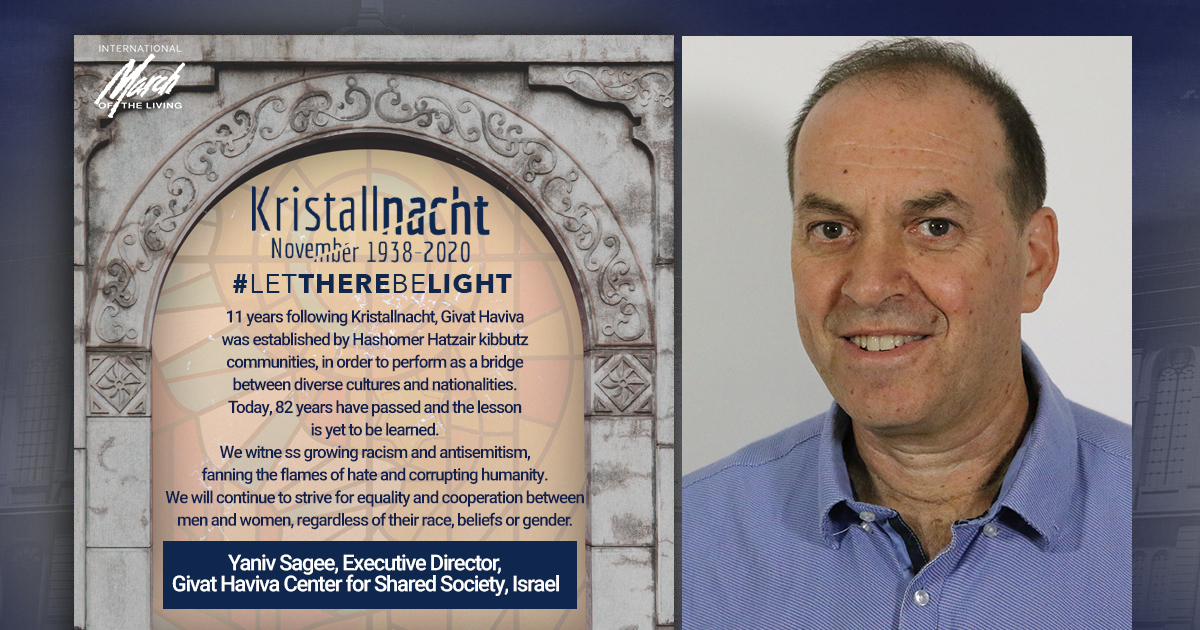 To write your own personal message, please visit the campaign website: motl.org/let-there-be-light