Schetyna's visit marks the 25th anniversary of the restarting of diplomatic relations between Poland and Israel. 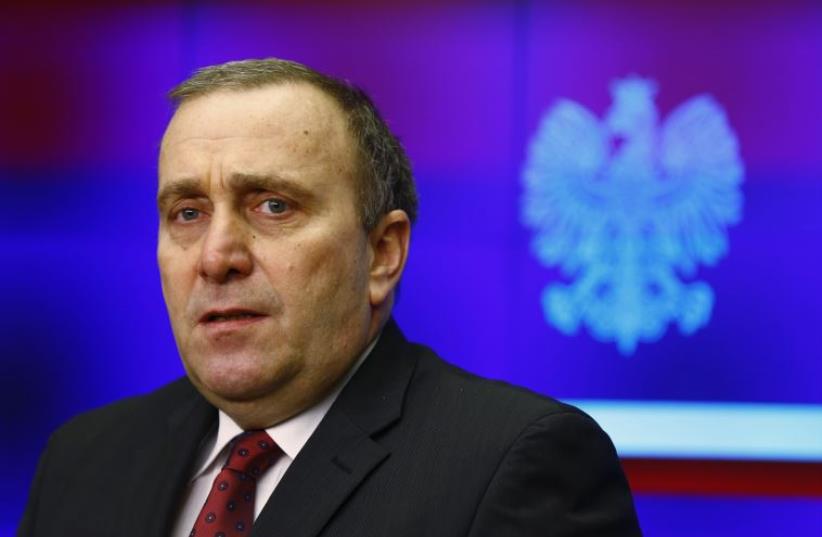 Poland's Foreign Minister Grzegorz Schetyna
(photo credit: REUTERS)
Advertisement
Poland has an important place in Jewish history, Foreign Minister Grzgorz Schetyna told President Reuven Rivlin on Sunday, at the President’s Residence in Jerusalem.Schetyna said it was important after the election in Israel and the presidential election in Poland, for him to be in Israel, which he last visited seven years ago in his capacity as Poland’s minister of internal affairs and administration.He also recalled having met Rivlin in Warsaw last October at the opening of the POLIN Museum of the History of Polish Jews, which serves as “an example of our common history.”Rivlin said that his visit to Poland had been his first overseas trip as president of the State of Israel.He made a point of welcoming Schetyna to “Jerusalem the capital of Israel,” and said that because Poland is a good friend to both Israel and the Palestinian Authority it could certainly explain to the Palestinians that threats and appeals to international organizations would lead nowhere in the attempt to solve the conflict.The only way, Rivlin insisted, was through direct negotiations.Schetyna, who arrived in Israel on Friday, had already been to Ramallah and Bethlehem on Saturday. He was accompanied by Piotr Puchta, the director for Africa and the Middle East at the Polish Foreign Ministry in Warsaw, who has served in various posts at the embassy in Tel Aviv, most recently as political counselor. He was subsequently Poland’s representative to the Palestinian Authority and after that ambassador to Egypt.Rivlin asked Schetyna to convey his best wishes to Poland’s former president Bronislaw Komorowski whom Rivlin knows well from the days when they were both speakers of their respective parliaments, and also his congratulations to President- elect Andrzej Duda, and said that both would be welcome in Israel whenever either of them cared to visit.Rivlin emphasized that Israel has no quarrel with Islam, but only with those members of the Islamic faith who seek to destroy Israel.“You are here at a time of confusion in the region,” he told his visitor as he elaborated on the situation in Syria, Israel’s condition of Gazan non-belligerence for being party to the rebuilding of the Gaza Strip, and Israel’s concerns about the outcome of negotiations with Iran.As for the Palestinians, Rivlin stressed as he has done lately with every visiting foreign dignitary, the urgency of confidence building measures that will enable the sides to trust each other.Schetyna said that Poland was also worried about the security situation in the region and its repercussions for both Poland and the European Union.His visit to mark the 25th anniversary of the restarting of diplomatic relations between Poland and Israel was more than political, he said. Poland wants to cooperate with Israel on every level, and toward this aim he had brought with him a 120-plus-member diverse business delegation that spent Sunday in Haifa and will spend Monday in Tel Aviv.He was also keen to expand exchanges and cooperative ventures between young Poles and young Israelis.